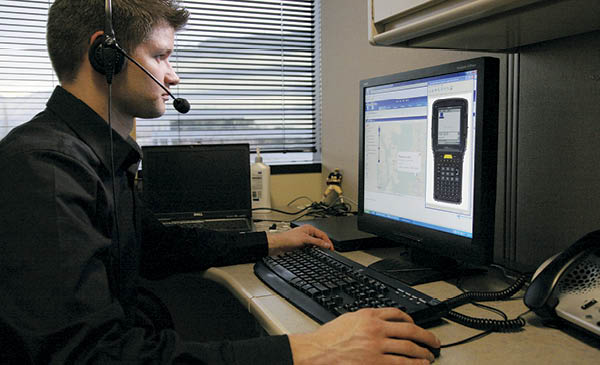 When Kent Kostuk set out to replace 245 handheld devices across four warehouses, the industrial engineering manager anticipated implementation would take at least a few months. His company, distributor and wholesaler Federated Co-operatives Limited (FCL), operates warehouses widely spread across western Canada. "Reaching most of our warehouses requires air travel or a five- to eight-hour drive from the home office in Saskatoon," Kostuk says.

He envisioned on-site assistance and a phased approach, rolling out the new handhelds first to one location, waiting at least one month to identify any problems, then moving on to subsequent sites. Instead, he deployed mobile computers at four locations in just three weeks. Remote control technology allowed his team to support end users without ever leaving Saskatoon.

The retail stores and gas stations that are part of FCL, in turn, have more than 1.5 million active members in 500 communities selling gas, food, animal feed, and other merchandise. As member-owners, they share in the success of their stores, netting part of the profits at year's end.

FCL moves more than $1.75 billion in eggs, milk, bread, and thousands of other grocery items annually, as well as $300 million in general merchandise and $343 million in crop supply and livestock products.

Workers within FCL's warehouses manage stock with handheld and vehicle-mounted devices, and voice terminals. With warehouse locations so far from the company's headquarters, the small industrial engineering team aims to support them remotely to reduce costs and turnaround time.

Sticking With What Works

"Avalanche provides an easy, efficient way to deploy updates," Kostuk says. "When we implemented the solution, the department comprised just two people. We could not have rolled out updates within a reasonable period without automating deployment."

"A hardware vendor-centric solution would not have been able to move as easily to new devices," Kostuk says. "The learning curve was shorter, and we felt comfortable because Wavelink had worked well for us in the past."

During the hardware refresh, Ryzex also introduced the company to Avalanche Remote Control, a mobile help-desk solution that allows FCL to support devices in the field remotely. The industrial engineering team welcomed the addition of the new tool, because troubleshooting devices has not always been simple for the team.

"At times, we could not get to the warehouse for two to three weeks to make repairs. Sometimes the on-site staff mailed faulty devices to us," Kostuk says. "The ability to manage devices centrally is a huge advantage."

Avalanche Remote Control not only enables the team to provide ongoing device support, but was also a major benefit during the move to the new handheld computers.

"We hadn't completed an equipment refresh for a decade," Kostuk says. "We knew that employee expectations would be high, and we wanted to be able to address any issues quickly and remotely."

Kostuk and his team introduced new devices to one location first, using Avalanche Remote Control to understand questions and issues as they came up. Within one week, FCL went live with the new devices at the second location, with the other two following.

"With Remote Control, we could validate what was happening right on site," Kostuk says. "As soon as we discovered a problem at one location, we could roll out changes across all four sites within 30 minutes."

Kostuk estimates that remote support reduced the tech refresh from at least two months down to three weeks, and made for happier end users. It was an aggressive timeframe he would not have pursued without Remote Control.

"Remote Control accelerated our rollout, reduced our costs, and helped us resolve any issues that arose," he says. "Because we were able to complete the process quickly, employees felt we were responding to their needs. As a result, they were more willing to accept the new equipment."

Using Avalanche Remote Control, FCL captures screenshots of what end users are seeing and uses them for internal documentation, training, or to engage help from its technology partners.

The support team can employ two levels of remote technology when seeking help from vendors: first, pulling up an end user's screen on their desktops, then allowing a vendor to connect remotely to see exactly what's happening. Compared to phone or in-person support at far-flung warehouses, remote support cuts costs and gets devices back in service faster.

"Operating in western Canada requires some autonomy," he says. "Solutions such as Avalanche Remote Control allow us to take ownership so we can keep our warehouses running without interruption."