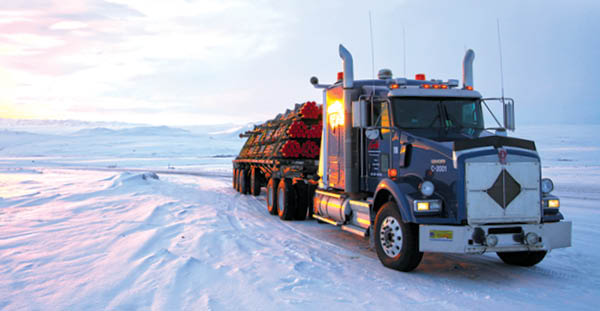 Shipping to and from the wilds of Alaska requires the expertise and specialized equipment offered by intrepid transportation providers.

If you've ever watched an episode of the reality show Ice Road Truckers, you've seen what it's like to move freight in Alaska. The show follows a group of drivers who operate trucks on seasonal routes crossing frozen lakes and rivers in remote Arctic territories in Canada and Alaska. The severe weather and other dangers they encounter have produced enough drama to generate multiple seasons of the television show, which draws millions of viewers.

"Ice, earthquakes, floods, forest fires—we've seen it all in Alaska, but we always get the freight delivered," says Linda Leary, president of Anchorage-based third-party logistics (3PL) provider Carlile Transportation Systems Inc. "There's a pioneering, can-do attitude in Alaska, along with a huge emphasis on safety. Weather doesn't stop you here—nor does much else."

Leary should know. The Alaska version of Ice Road Truckers is based on Carlile and its truck drivers.

Weather and harsh environmental conditions will always present challenges to logistics and freight delivery in the 49th state, where the annual temperature averages just 32.8 degrees Fahrenheit. No matter what mode is employed, a strong arctic storm can wreak havoc on even the best-planned shipments.

"Not just any truck or ship can operate there," he adds. "Ships must be ice banded. Trucks require special parts and lubricants, and those serving the oil fields in Prudhoe need special preparation to keep the engines from freezing."

Working Around the Weather

Alaska Air Cargo pioneered an integrated GPS system that allows its planes to fly a precise route, aiding safe navigation in near-zero-visibility conditions such as heavy snow, rain, or fog. "But there is only so much you can do about the weather," Zubeck notes. "To be successful in Alaska, shippers and carriers must develop ways to mitigate the damages."

Weather isn't the only logistics challenge in Alaska. Shippers must overcome obstacles that are as unique as the state itself—for example, its size and remoteness.

Covering 663,268 square miles, Alaska is one-fifth the size of the contiguous United States. Much of the enormous area is accessible by only one mode of transportation. Transitions between modes can compromise visibility throughout the entire supply chain, adding complexity.

"The key to success for transportation providers is offering a variety of service options that can be combined to meet shipper needs, no matter how remote their location," says Leary. "And robust tracking and monitoring systems are vital to support those options."

In Alaska, an item's final delivery could be accomplished via small boat, floatplane, or barge. "One popular misconception about Alaska is that final delivery is made by dog sled," says Oliver. "I don't know of a case where that has actually happened, but we do have some creative ways of making final delivery, because many locations are difficult to access."

The state's remoteness can also limit the labor pool, particularly for trucking companies. "Trucking is normally a transient segment, but people can't move easily because of the down economy," Leary says.

Alaska is a resource-rich state, and how those resources are regulated significantly affects the state's economy—and its businesses. The oil industry is the dominant player, providing an estimated 80 percent of Alaska's revenues.

In February 2012, the Obama administration cleared one of the last significant hurdles to offshore oil drilling in the Arctic by approving Shell Gulf of Mexico Inc.'s contingency plan for responding to accidents in the Chukchi Sea, 70 miles off Alaska's northwest coast. The company plans to begin exploratory drilling there in June 2012.

"As a cargo carrier, we are excited and encouraged by the fact that Shell is finally able to expand drilling in the Chukchi Sea," says Zubeck.

But the oil industry and other resource issues can also make it harder for companies to do business in the state, or stifle their ability to grow.

"There are a lot of political issues—including oil and gas leases, mining, taxes, and new transportation regulations—to deal with in Alaska," says Leary. "Shippers and carriers have to pay attention to how those factors can affect their business."

Seafood harvesting is another significant economic driver for the state. Alaska Air Cargo flies an average of 25 million pounds of seafood out of Alaska each year.

Another current challenge in the state is the controversy over the bypass mail system. Because many parts of the state lack infrastructure, the U.S. Postal Service (USPS) established a program many years ago to use local transportation providers to ship large volumes of mail to remote communities. Although the program reportedly saves the USPS millions of dollars in handling costs annually, it has come under scrutiny recently as part of the federal government's effort to reform the USPS.

"The USPS contracts Alaska Air Cargo and other carriers to deliver mail that is too expensive for it to handle," says Zubeck. "Almost 100 million pounds of mail go to remote locations each year. Many can't be reached by car, so eliminating the bypass mail system could dramatically affect them—and carriers."

The Customer is King

The pioneer spirit is alive and well in Alaska, as evidenced by the way companies there conduct business. "Doing business in Alaska is about the relationships you build with your customers," says Leary. "It's a relationship-driven economy, with a lot of handshake deals you don't see often in the Lower 48."

Anchorage-based Spenard Builders Supply, the state's largest supplier of materials and home improvement products, has been a Carlile Transportation Systems customer for more than 20 years. Both companies have seen dramatic changes in business needs and customer demand.

"To be successful in Alaska, transportation providers have to be flexible," says Leary. "They have to grow with shippers as needs change, and offer a blend of services. This market is not big enough to specialize, so they have to offer a range of services to compete."

Constant innovation is another key to success. For example, Lynden recently introduced a predictive delivery system that allows it to provide remote villages in Alaska a 30-minute freight delivery window.

"That kind of service makes a big difference in Alaska," says Pat Brown, general manager of Tacoma, Wash.-based Worldwide Movers Inc., which loads and ships household goods for civilians and military personnel moving in and out of Alaska. Working with Lynden, it moves freight primarily via ship and barge.

"Barge service is cheaper than steamship," notes Brown. "The only real challenge is the weather. While steamships can plow through bad weather, barges often have to wait it out. We can save money using barges because they are faster, but we often can't guarantee our customers a specific delivery time during bad weather.

"But in the summer, barges can save us money, which we pass on to our customers," he continues. "Having a range of options is important in Alaska, because we often have to change plans."

Because Juneau is landlocked, Alaska Brewing relies heavily on barge transportation. But because barges take five days to travel from Juneau to Seattle, and don't sail every day, the brewery often requires faster transport modes. "Air cargo service is especially useful when we partner with other companies in Alaska," says Johnston. For example, Alaska Brewing Company often offers food and beer pairings with companies such as Copper River Seafood.

"Using Alaska Air Cargo, we can share products with Copper River quickly and easily," Johnston says. "We also use air freight for special events when we don't have time to ship by barge."

For all businesses, operating in Alaska presents a number of challenges and opportunities. The key is what you make of them.

"Everything about our business is a little different simply because we are in Alaska," says Johnston.

For transportation providers, safety and consistency in this unusual environment are vital. "Companies have to ensure they can operate without anyone getting hurt," says Oliver. "Inexperienced service providers sometimes try to take on the Alaska market, and many of their trucks end up in a ditch.

"Shippers need experienced providers going the last mile," he continues. "Ships have to be built specifically for the trade; for example, electronics on the barges have to be up to date to monitor the weather. Shippers need to be aware of their options."

Despite the challenges, moving freight in and out of Alaska has gotten easier over the years. As transportation service providers continue to develop new offerings, it will become increasingly possible for shippers to tame the last frontier.