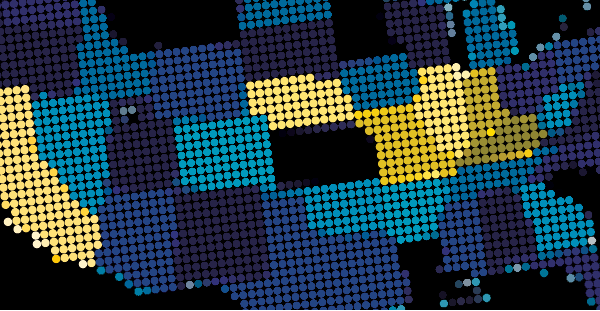 Today's business leaders are seeking any formula that can help them compete in the global marketplace. Manufacturing and distribution facility location can play a large role in that equation, ensuring companies are positioned for quick turnaround and efficient transportation access to points across the country and around the globe.

Here's a look at six regions that boast unique combinations of geographic, workforce, economic, transportation, and business climate benefits that make them hotspots for logistics and supply chain activity.

Competitively priced real estate, labor, energy, and transportation all help keep logistics costs low for companies in the Illinois-Missouri region. In some areas, transport costs are reported to be 27 percent lower than the national average, according to Ameren Corporation, an investor-owned electric and natural gas utility that serves 64,000 square miles of the Missouri-Illinois bi-state region. Selected business costs in the region are at least 18 percent lower than typical or national average costs for distribution centers. Meanwhile, the available labor pool has experience in all aspects of wholesale trade, distribution, logistics, and related businesses.

The Illinois-Missouri region's central location and rich transportation infrastructure put it within an eight-hour drive of 78 million consumers whose incomes are above the national average, and interstate highways offer convenient access to markets such as Chicago, Indianapolis, Memphis, Dallas, and Denver. All seven of North America's Class I railroads operate in the region.

In Illinois, Ameren recently introduced a 10-year Modernization Action Plan (MAP) that involves investing $625 million in thousands of infrastructure projects. The company will create up to 450 new jobs during MAP's peak year, while the infrastructure improvements are expected to enhance reliability, convenience, service, efficiency, and savings.

Additionally, the Missouri Public Service Commission recently approved Ameren Missouri's filing under the Missouri Energy Efficiency Act, which calls for Ameren to invest $147 million in energy efficiency programs through 2016. The installation of smart sensors and switches will help detect and isolate outages so they can be fixed faster, while new software and technology is expected to reduce outage duration and frequency. Annual energy savings from these programs are expected to total nearly 800 million kilowatt-hours.

Geographically, Nebraska is central to both regional and national markets. Through Nebraska's roadways, goods delivered by truck reach more than 25 percent of the U.S. population in just one day. Within two days, that percentage rises to more than 90 percent. Meanwhile, 10 freight railroads operate more than 3,200 miles of track throughout the state. No major city in the United States is more than five days by rail from Nebraska.

Nebraska also has a well-educated workforce and low unemployment rate. "Historically, unemployment has been around four percent," says Lemke. "Even during the recession, Nebraska had one of the nation's lowest unemployment levels. The workforce consists of productive, dependable, educated, and well-trained individuals who care about what they do. This contributes to high productivity and success rates, and low absenteeism and turnover rates."

Businesses find value in Nebraska's electricity costs, which are often more than 20 lower than the national average. In addition to being affordable and reliable, electrical power in Nebraska is diverse. The state's utilities use a balanced mix of resources—including water and wind, as well as coal, nuclear, natural gas, oil, and methane—to generate power.

The Joplin, Mo., region comprises seven counties in southwest Missouri and southeast Kansas. Situated nearly equidistant between Los Angeles and New York, as well as the Mexican and Canadian borders, and served by an excellent highway system, the Joplin region is within easy reach of major markets such as Chicago, Dallas-Fort Worth, Tulsa, Little Rock, and Memphis.

Three Class I and two regional shortline railroads play an important role in the region's transportation system. These rail lines provide direct access to major ports on the Gulf of Mexico and Pacific Ocean. Air service is available at the Joplin Regional Airport and, within a 90-minute drive, at airports in Tulsa, Okla.; Springfield, Mo.; and northwestern Arkansas.

The Joplin Regional Partnership provides site selection assistance, incentive and business tax information, key contacts in business and local government, demographic and economic data, and other services. Contacting the partnership allows site selectors to access information about multiple locations throughout the area that meet their specifications. This insight can reduce the number of inquiries a site selector has to make, and help expedite the selection process for companies looking to move, expand, or begin operations.

To build a quality workforce, employers in the region can take advantage of customized training programs offered through several institutions of higher learning. On the Missouri side of the border, Crowder College, a two-year institution, and Missouri Southern State University both offer training with state support through the Alliance for Business Consulting and Development. On the Kansas side, Pittsburg State University and two community colleges provide similar opportunities.

"Distribution and logistics are target industry sectors for Kentucky, and the state continues to see significant growth from both new companies locating to the state and existing firms expanding operations here," says Mandy Lambert, deputy commissioner of business development at the Kentucky Cabinet for Economic Development. "Kentucky's economic success stems from factors such as its central location, extensive infrastructure, low business costs, and quality workforce."

Located at the center of a 34-state distribution area in the eastern United States, Kentucky's location facilitates the distribution of goods and materials to a massive industrial and consumer market. Shipments moving by truck can reach more than 65 percent of the nation's population within one day.

That accessibility extends to other transport modes. In addition to 19 interstates and major highways, Kentucky's logistics network also includes major rail networks, barge traffic on the Ohio and Mississippi rivers, five commercial airports, and dozens of regional airports, making it easy to reach all points of the globe easily and efficiently.

Many of Kentucky's most recent economic development successes have been aided by the state's Incentives for a New Kentucky programs, which offer several innovative tax incentives to businesses locating, expanding, or reinvesting in the state.

The interstate highways that converge in Indiana have earned the state the nickname "Crossroads of America." In addition, an extensive network of rail services and several inland ports—including facilities on the Ohio River at Jeffersonville and Mount Vernon—give companies in Indiana and southeast Illinois many cost-effective choices for shipping and receiving freight. The state is within a one-day drive to every area east of the Mississippi River, including parts of Canada.

Site selection teams considering the region can gain insights from Hoosier Energy—a generation and transmission cooperative that provides electric power and services to 18 electric distribution cooperatives throughout central and southern Indiana and southeast Illinois. Hoosier Energy developed the Hoosier Energy Economic Development department to provide economic development solutions throughout its service territory. Since its creation in 2008, the department's efforts have helped generate thousands of new jobs, $300 million in capital investment in member territories, and an estimated 25 megawatts of additional load. The Hoosier Energy Power Network provides electricity to developed sites and industrial parks along the I-70, I-65, I-64, and I-74 corridors.

The combined ports of Los Angeles and Long Beach are the largest in North America, and in the top five for global container volume. They provide an ideal gateway for products manufactured in Asia. Some logistics experts predict that even after the Panama Canal expansion opens in 2014, it may still be faster and less expensive to route freight to the West Coast and transport it via landbridge to the Midwest.

"Because so many of today's imported products come from Asia, the West Coast has become a premier destination for shippers," says Lance Ryan, vice president of marketing and leasing for Watson Land Company, which develops, owns, and manages industrial properties throughout Southern California.

"About 40 to 50 percent of goods imported through the Port of Long Beach and the Port of Los Angeles are delivered to the local population," says Ryan. "The rest are transported across the United States to other locations either by rail or truck."

Watson Land Company has developed several million square feet of master-planned centers within four miles of the ports of Los Angeles and Long Beach, and maintains a footprint that includes facilities in Carson/Rancho Dominguez, Chino, Apple Valley, Fontana, and Redlands, Calif. It is also the first developer in Southern California to design and construct speculative buildings in accordance with the U.S. Green Building Council's Leadership in Energy and Environmental Design (LEED) guidelines.

"The fact that Southern California is on the leading edge of design is a big plus for businesses," says Ryan. "Operational improvements—such as more efficient warehouse lighting—create significant cost benefits."

In addition, due to recent demand for higher clear heights, a number of 36-foot clear buildings are currently under construction in the area. Because average net rents trend well above national averages in Southern California, many businesses find it more cost effective to increase their vertical product storage by 10 to 25 percent than to occupy additional square footage.

And as most business and logistics leaders know, small factors that improve efficiency and cost effectiveness can mean the difference between success and failure.