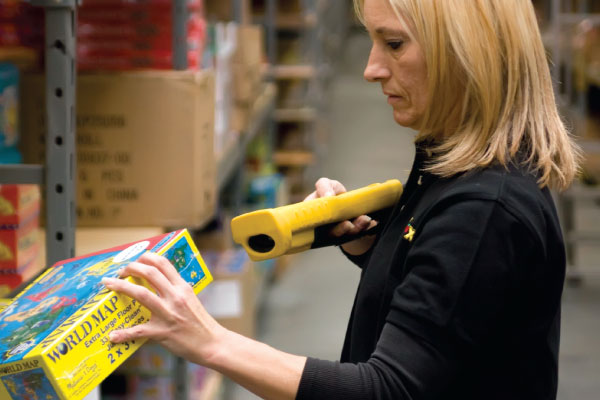 Acquiring a warehouse and following the innovation and imagination of a WMS helped The School Box earn top grades for its distribution operation.

When The School Box opened shop outside Marietta, Ga., in 1990, David Persson and his wife Christine were committed to bringing the learning experience closer to home—for both educators and parents.

That mission hasn't changed, but The School Box's audience has. Now it delivers its message through 14 retail stores in Georgia and Tennessee, plus a mobile unit that delivers to rural areas, and a ballooning catalog and e-tail business.

The School Box sells a variety of educational products such as children's literature, teaching resource books, classroom decorations, arts and crafts supplies, and e-learning software. It maintains an inventory in excess of 22,000 SKUs, with about 60 percent of its business coming from in-store customers and 40 percent from catalog and Internet business.

Sticking to its core paid dividends for The School Box as it built a brick-and-mortar presence, but eventually it fell victim to its own success. "By 2008, we had outgrown our logistics strategy," says David Persson, the company's owner and CEO. "We realized that distribution was our weak link."

This dilemma is common for small businesses, which initially grow by building consumer affinity and focusing on their brand and products—not their warehouse. The School Box fulfilled orders from an 18,000-square-foot area shared with one of its retail shops, and it didn't have room to manage peak season overflow.

"The old warehouse was attached to one of our stores," explains Persson. "Some inventory was actually positioned in the retail space. Customers would sometimes pick up products and move them. We didn't know where anything was, and we were generating backorders for product that was in our facility."

The School Box experiences a six-week summer rush when demand for educational supplies peaks in anticipation of the new school year. In the past, it leased additional warehouse space nearby and shuttled inventory between the two stock points.

With bunches of pre-allocated orders idling, the retailer was constantly maintaining pallet positions. It had no item-level visibility, and finding SKUs was tedious and time-consuming.

"We were handicapped by the space we were in," Persson says. "We needed a facility more suited to distribution."

In late 2008, The School Box partnered with Cambar Solutions, a warehouse management system (WMS) vendor based in North Charleston, S.C., to help equip a new 40,000-square-foot distribution facility. The objective was twofold: to expand into a new warehouse and support that space with better IT infrastructure.

Cambar, founded in 1981, installs WMS solutions for large and small companies, but is predominantly focused on mid-market customers such as The School Box. "They generally lack technology, but have been around long enough to make a go at an IT investment," says Rick Register, president and chief operating officer of Cambar Solutions. "Mid-tier firms understand the need to become efficient and manage more space without scaling up labor."

Persson didn't have much distribution experience, but he had an idea what the company needed and was willing to adapt. "We had a rough layout for the new facility," he says. "But after installing Cambar's WMS, we re-shelved 25 percent of the warehouse space to be more efficient."

Because many of The School Box's problems were interrelated, starting from scratch was beneficial and resulted in opportunities for immediate return on investment.

"We usually retrofit warehouse technology to an existing footprint," explains Register. "But with a new facility, we can set up the WMS from scratch and position equipment where it needs to be."

Cambar visited the new facility for one week to learn more about its business, understand its needs, and figure out how to properly integrate the new system.

"My objective was to get through the process without asking for modifications, which surprised Cambar," recalls Persson. "We were willing to change our approach to fit the WMS."

After the three-month WMS rollout, improvements were fast and widespread. Moving into the new DC allowed The School Box to better utilize space and jettison its leased warehouse during the summer. With product centralized in one facility, it was also able to eliminate overages because it had better inventory visibility.

"In our initial business requirements study, we talked The School Box through the system's capabilities and how to take advantage of them," says Register. "Then we walked them through the movements and sequencing within the warehouse."

The structural and strategic transition triggered a cascade of efficiencies throughout the enterprise, rationalizing transportation costs, expediting order fulfillment, increasing accuracy, and improving customer service—all of which go straight to the bottom line.

In the past, The School Box sent pre-allocated inventory to its stores, using historical data to make educated guesses about what they would need in the coming weeks.

If demand for a specific SKU was hot and the retail shop sold out, replenishment couldn't keep pace and sales were lost. Conversely, if a product didn't sell, stores were left with high stock counts. The School Box didn't have the flexibility or visibility to quickly flow inventory in and out of its facilities to react to changing consumer patterns.

"Today, our surpluses are in the warehouse, where we have visibility, and not in the store, where we didn't," says Persson. "We have less inventory in our system with the new DC, despite the fact that we have opened two new stores in the past year."

The School Box has similarly eliminated the need and cost of transferring inventory store-to-store and warehouse-to-warehouse. Historically, 40 percent of The School Box's inventory was shipped direct-to-store, and it might send 14 pieces in one shipment instead of building and consolidating loads for multiple store deliveries. Transportation and labor costs spiraled out of control.

"In 2009, we cut our freight spend in half because all inventory came into and moved out of the DC," says Persson. "In some cases, we now qualify for free transportation from our vendors because we have consolidated our volumes."

Opening a new distribution facility furnished with innovative WMS and mobile computing technology has enabled The School Box to take advantage of upstream opportunities that were never possible before.

Because peak demand season is in the summer, school and paper supply vendors offer incentives to buyers who order bulk product earlier in the year. But The School Box could never capitalize on these offers because it didn't have space to store product long term.

Moreover, The School Box used to place just-in-time orders to suppliers closer to peak season. On top of the fact that incentives were lost and smaller, batched orders resulted in higher transportation costs, vendors often ran out of high-demand items. In 2009, all this changed.

"We pre-ordered 157 pallets of paper in February, and we didn't have to replenish inventory throughout the year," says Persson. "We were able to ship via truckload early, check it in, and put it away."

With greater item-level visibility in its new DC, The School Box knows exactly where those SKUs are and doesn't have to worry about finicky shoppers dropping items in odd places.

"We stock white construction paper in eight locations in the new facility, and we know where it all is," says Persson. "In the old warehouse, I had to go out on the floor and look through bins. Now we can go right to the gun, and if a product is not there, we can generate an automatic replenishment. We can drill down to bin-level detail like we never could before."

MOVING AHEAD, ANOTHER YEAR

"We're in the process of setting up a two-to-three day post-implementation meeting with Cambar," says Persson. "They will talk to employees in the facility, share new features of the system, and suggest ways we can improve our business processes."

For Cambar, the one-year review is part of its value proposition. The WMS vendor visits the customer's site, evaluates the system, and monitors progress. It's an ongoing process.

"Together we might look at how The School Box can ask suppliers for advanced shipping notices or packaging and label requirements, and leverage the system to incorporate standard flows that might get product in the door faster," says Register.

Moving ahead into 2010, The School Box is preparing to take what it has learned and build upon its early successes. After it installed Cambar's WMS, it opened two new stores. Now it's bidding on a major school contract, and will likely win the business. "We wouldn't have been able to do that without the new facility," says Persson.

The School Box's new technology and warehouse help it make the grade—and then some.

"As part of the implementation, we presented options for mobile computing and radio frequency (RF) equipment through our channel partner LXE," says Rick Register, president and chief operating officer of Cambar Solutions.

David Persson, owner and CEO of The School Box, had spent six months researching how other cross-industry warehouses were using mobile solutions for distribution and fulfillment. "I was looking for a commonality among solutions, but I saw five different set-ups," he recalls.

Cambar gave The School Box RF infrastructure for mobile computing hardware and software, then married it to the WMS and existing point-of-sale module, and trained employees how to use the equipment.