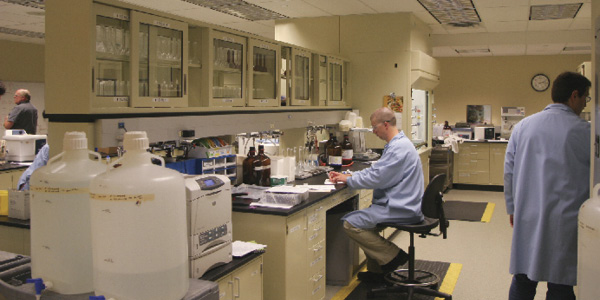 Apex International reaches the height of success by cutting waste and going Lean.

Dave Goldberg, CEO of Apex International, decided his company needed a dramatic change to regain its footing. For more than one decade, Apex, a contract manufacturer based in Chaska, Minn., had enjoyed consistent and headlong growth, expanding at a compound annual rate of approximately 35 percent during its first 12 years. Times were so rosy that Apex's momentum proved immune to even the most hostile economic conditions. In fact, during one year at the height of the recession, Apex managed to boost its profits more than 40 percent.

Goldberg, a former customer of contract manufacturers, started Apex in 1999. Apex develops, produces, and distributes products such as sunscreen, bath and body care, and child care items for over-the-counter, cosmetic, and household realms. The company maintains a combined 120,000 square feet of manufacturing space between two production facilities, and 300,000 square feet of laboratory, warehouse, and distribution space.

The sustained prosperity Apex experienced for more than one decade had hard work and personal sacrifice at its roots, Goldberg says. However, the company became too big for the processes and structure it had maintained through its boom years. For Apex to continue to be successful at its larger size, it would need to be more efficient and focused, reducing waste in every component of the business—especially in the time it took to complete tasks.

"Our success didn't come through process," Goldberg says. "It was many acts of heroism, and it got to the point where we couldn't continue to have that kind of success the way we were doing things."

Apex observed the success other companies—most prominently, Toyota and Danaher—experienced when adopting Lean management principles and philosophy, and decided that held the best prospects for the company's future. Apex pursued efficiency to ensure that speed, productivity, and quality became steadfast strengths.

Initially, Apex attempted to implement Lean management principles and tools on its own, but was not successful. The leadership team decided the company needed outside help.

Apex researched and spoke with firms that could aid its adoption of Lean, and gravitated toward Ann Arbor, Mich.-based Simpler Consulting, a Truven Health Analytics-owned company that serves as a coach and consultant for organizations adopting Lean enterprise solutions. Manufacturing is one of Simpler's chief client areas, and many of its consultants have manufacturing industry backgrounds, according to Mike Chamberlain, president of Simpler Consulting North America.

Most of the firms Apex encountered touted their capabilities in teaching clients an assortment of Lean tools. Their focus was tactical. Apex, however, sought a more strategic, wholesale approach. "Simpler was not just about implementing Lean, but about enabling a cultural shift so we could go through a transformation to change how we operate," Goldberg says.

Simpler appreciated Apex's perspective from the outset. "Its initial premise was to improve, and to become a more customer-centric organization," Chamberlain says. "That's exactly the mindset we can stand behind."

Simpler began to work with Apex in June 2014. First, the companies partnered to develop a transformational plan of care, which served to identify why Apex was taking this major step, what it hoped to accomplish, and what metrics would determine if the effort was successful. Then, they burrowed down to Apex's value streams, mapping the paths that materials and information travel on every project within the company.

From there, Apex defined its current state in each value stream, identified the steps it would take to improve in those areas, and sought to develop and schedule rapid improvement events to aggressively pursue and complete specific objectives, each within a window of 60 to 90 days.

Goldberg describes the process as daunting. "It's a big change," he says. "Our employees were used to doing things the way they've always done them. They were apprehensive, but up for the challenge."

Apex soon learned its operation was needlessly complex. A siloed organizational structure created redundancies in processes, including many information and materials handoffs from one person to another. "There was a tremendous amount of waste in the process," Goldberg says.

In response, Apex worked with Simpler to develop flow cells that simplified the workflow across the company, and addressed daily tasks such as taking orders; receiving and testing materials; and making, filling, testing, and shipping products. The new flow cells shaved handoffs to approximately 25 percent of what they had been in the silo-style arrangement.

Commitment from the Top Down

Apex wanted to ensure a full commitment to Lean, and that meant dedicating resources to it. This included developing a team that was charged with overseeing Lean projects, while providing support, teaching, and coaching. Weekly meetings tracked progress and kept an eye on Apex's "true north" metrics—Simpler's term for key measurements that indicated Lean's impact on the company.

The Apex leadership team makes it a point to be conspicuously involved in the process. For instance, each member of the team regularly walks to different areas of the company to check on headway and offer assistance. This visibility helps deliver the message of Lean's importance to the company.

Lean principles, in fact, depend on changes being both identified and implemented through the efforts of workers at every level of an organization. "Senior leadership defines the what, and employees define the how," Chamberlain says. "You have to engage middle management and the people on the front lines. If you give them a prescriptive cookie-cutter approach to what their jobs should look like, Lean management will fail in record time."

Goldberg has been pleased with the way employees have embraced the project. Approximately 50 percent of Apex's 400 employees have been involved in at least one rapid improvement event, and Goldberg says enthusiasm generally runs high.

"Everyone is getting exposed to Lean," he says. "They're learning the process and taking it back to their areas. It has become a grassroots movement."

Apex finds its most robust signs of progress come with the quality and commercialization teams. Change has been more challenging on the manufacturing floor because it is home to the most processes and the most people.

Wary of backsliding, Goldberg has been pleased to observe Lean increasingly integrated into daily operations, but he recognizes potential pitfalls ahead if discipline slackens. "A commitment to Lean is constant," he says. "You can never let up."

Apex was fortunate not to lose customers during the painful stretch when processes faltered and created problems. The company made a point of reaching out to those clients as it has embraced Lean to explain the new process and its benefits.

In response, existing customers are submitting more orders, and new customers are arriving. After years of essentially flat growth, Apex has begun to return to the expansion of its earlier years. In the fourth quarter of 2015, customer orders were up more than 40 percent—and Apex has the processes in place to fill them on time.

Lean management has found a home at Apex, and Goldberg is excited at the possibilities forming for the future. Already, talented workers no longer needed in their old posts because of improved efficiency have been reassigned to places in the company where they can add more value. In addition, Apex's swifter deliveries have helped reduce inventory by 60 percent, opening up square footage to accommodate growth and improve the company's cash position. More possibilities will emerge as Apex infuses Lean more thoroughly, Goldberg says.

"Once we get to the point where everybody's on the same page and working toward the same objectives, Lean management will become extremely powerful and be difficult to compete with," he says.

Once faced with a worrisome future, Goldberg and his leadership team elected to adopt the Lean management philosophy to jolt the company, and improve efficiency and effectiveness. With the help of Simpler Consulting, Apex embarked on a transformation of both its processes and its culture to jumpstart the company and return it to profitability.

Since contract manufacturer Apex International implemented Lean management techniques and principles, the results have been striking:

The company also reduced waste due to increased real-time recording and visual management, and achieved quicker throughput from the arrival of raw materials through release of product.