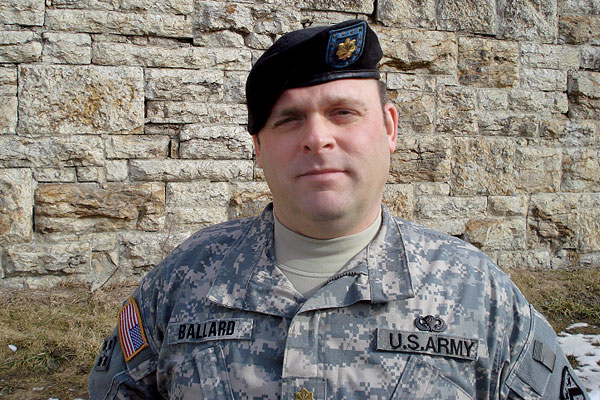 Jason Ballard spent four years in the Marines, distributing ammunition in locales as diverse as Somalia and Okinawa. When he left the service, he was tired of logistics.

Six years later, when Ballard graduated from college on an Army scholarship, the newly minted second lieutenant found himself back in logistics. "That was a sign," Ballard says.

"It was a great opportunity to see logistics operations in action," he says.

Ten years as an Army sustainment officer provided views of the military supply chain from just about every angle. Besides helping to manage the end-to-end flow of assets, Ballard has distributed goods across a brigade, making sure supplies went first to units that needed them most.

He also led a forward support company in Iraq, where his 200 soldiers maintained armored vehicles and trucks, prepared and delivered food, brought supplies and equipment into the battalion area, and delivered those goods to infantry and armored units in the cities and countryside.

Ballard took pride in treating soldiers well. For example, it would have been easy to deliver Meals Ready to Eat to a remote outpost every two weeks. But those packaged meals taste "pretty bland," he says, and soldiers deserve better.

Making sure that troops in the smaller outposts got the same perks as soldiers in more accessible spots took some ingenuity. Once, the company found itself without refrigerated transport. "We bought deep freezers, put them in an armored stake bed truck, and hooked them to a generator," Ballard recalls. "We made our own refrigerator truck."

Delivering the goods stateside could be just as satisfying, such as the 20-degree day in Fort Carson, Colo., when Ballard's company brought hot food to infantry troops.

Currently, Ballard is enrolled in the Intermediate Leadership Education course at the Command and General Staff College at Fort Leavenworth, Kansas. When he's done there, he hopes to become a division transportation or support operations officer.

A logistics position in the Army does have its pitfalls. "If we don't get soldiers what they want, they're not happy," Ballard says. "And when the troops aren't happy, it's usually our fault."

But Ballard's career path brings rewards as well, such as serving soldiers hot coffee on a frigid day. "I can make a difference here," he says.

What do you do when you're not at work?

My wife and I spend a lot of time exploring new places, driving the back roads, and visiting small towns. We love fly fishing, being outdoors, and spending time with our dogs.

Theodore Roosevelt. His ethos of adventure, patriotism, and determination would make him an enjoyable, entertaining dinner companion.

When I was commander of a forward support company, our motto was "Seamless."

What's in your assault pack?

Pens, paper, and school supplies. In Iraq, I carried two extra magazines of ammunition, a chemical light, a compass, an extra set of clothes, a first aid kit, batteries for my radio, a pocket knife, and a map.

First Web sites you view in the morning?

CNN, Fox, and Army Knowledge Online. I visit sites that enhance my contributions and knowledge, and make me a better manager, soldier, leader, and person.

If you didn't work in supply chain management, what would be your dream job?

Related Articles
Casting Vets Into the Private SectorHiring Heroes: A Good Deal for U.S. Companies
Battlefields and Boardrooms: The Military-Private Sector Connection
Capt. Kazimir Kostrubala: Winging ItFrom the Service to the Supply ChainWilliam Cossey Jr.: Happy in the Middle of the ActionLogistics Gets SchooledSupply Chain Conferences Complement Logistics Job Training and EducationIn Search of the Next Great NicheEthan Frisch: The Spice is Right More related articles...