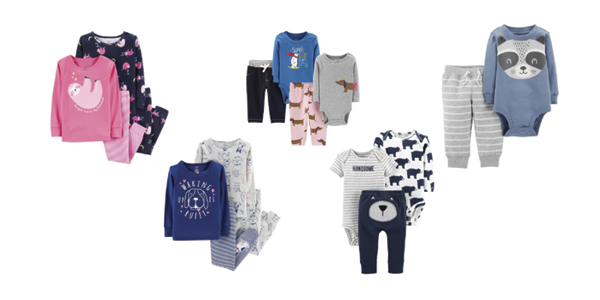 Carter's international growth led to more than 250,000 unique product SKUs. Most products have a short lifecycle and turn over in three to six months. The retailer needed a new solution to keep up with the number of products and quick turn time.

In response, Carter's turned to Anaplan, a San Francisco-based company that provides a cloud-based business planning and performance management platform based on a single hub where business users can create and utilize models. Carter's and Anaplan collaborated to implement a solution that would improve the accuracy and flexibility of Carter's inventory management, and support more informed supply chain decision-making.

Carter's includes children's apparel brands Carter's and OshKosh B'gosh, among others, and features a sales mix of 60 percent retail and 40 percent wholesale. In addition to operating 800 branded retail stores, Carter's sells its apparel through large retailers such as Sears, Kohl's, and Macy's.

With more than $1 billion in retail and e-commerce sales annually, the company has enjoyed 29 consecutive years of sales growth, using a multichannel business model with broad distribution. Carter's runs 120 factories that produce more than 700 million units annually, including more than 250,000 unique SKUs— with multiple routes and distribution centers for the same SKUs.

In the past, Carter's used a spreadsheet/database model that took one week to process and merge all the data intersections between its customers, SKUs, and origin and destination points.

"It's never good when it takes one week to gather and process data, and render an answer," says Peter Smith, executive vice president of global supply chain for Carter's. "Sometimes, by the time you get the answer, the problem has changed."

The growing challenge of servicing multichannel distribution of branded products across geographies and customer types, including Carter's direct-to-consumer business, was putting severe strain on the system.

"The complexity of managing and balancing it all had grown beyond the capabilities of the tool set we had," Smith says. "We needed a new solution."

Carter's considered several software applications, but the options they explored were too slow and inflexible for the job, prompting the company to search for a cloud-based solution.

"We live in a competitive market space and we work on thin margins," says Smith. "If you're not creative in your solutions, and have a desire to lean forward and build a better mousetrap, you'll get crushed."

Carter's eventually found Anaplan's cloud-based planning platform with supply chain solutions that excited its team from the outset, particularly for its agility and robust computing power. Carter's tried a conference room pro bono pilot of the Anaplan platform, and was pleased with the results.

"We knew we had found a solution that was viable for our complexity," says Smith. "And, we recognized the potential of the Anaplan platform."

Carter's and Anaplan sought a quick implementation relative to traditional supply chain systems, and used a build-as-you-go approach. Anaplan suggested bringing in a third party for the initial implementation, so Carter's tapped Deloitte Consulting, an Anaplan partner, to aid in the process.

Thanks to the work of a small, core project team with members from Carter's, Anaplan, and Deloitte, the new application was implemented in 14 weeks, on schedule, in fall 2016. By the end of the implementation, Carter's team members were taking the lead on development, ensuring the company could be self-sustaining once the system was up and running.

Carter's satisfied the business case for the new solution with quantifiable results within four weeks after implementation. The speed of the implementation, and the immediacy with which it began to pay financial benefits, distinguished it from a typical new system application.

"We went through the 14-week implementation process season one, and began to earn a return on the investment we made," Smith says. "That's radically different from other implementations."

Eric Lange, product marketing manager for supply chain at Anaplan, had recently joined the company when he was assigned to the Carter's implementation.

"My first implementation with Anaplan was an eye-opening experience," Lange says. "It got me excited about what we're doing within Anaplan, and what the solution can do for customers. Carter's has been a great partner to work with. To hear a customer excited about software is a software person's dream."

In adopting the Anaplan solution, Carter's was focused on maintaining its service levels, reducing working capital, and cutting the working days of supply within the network—in addition to improving its factory capacity management.

Carter's not only maintained service levels, it actually improved them through the system implementation. Adopting the Anaplan software removed eight working days of inventory from the supply chain and created smoother capacity management while improving accuracy and flexibility.

Carter's estimates that approximately $25 million of working capital returned to its cash flow from the project. The company now enjoys visibility of all its products at one time. It also can edit master data on the fly, receiving multiple updates throughout the day.

"We are able to maximize our capacity within our network, which ultimately reduces costs and complexity," says Smith. "There is less opportunity for failure because we work with more high- quality vendors and fewer secondary or tertiary vendors."

The days of waiting one week for data processing are in the past, Smith says, and the differences from the previous approach are stark.

"The new Anaplan model juggles 30 billion points of data to create an optimal plan to meet our business needs," Smith says. "That was more than any spreadsheet or database was ever going to do."

In addition, Carter's now can perform scenario modeling. "For instance, what's the implication if there's a four-day strike in Dhaka, Bangladesh, and our product can't get out of there?" says Smith.

"Not only are we radically faster with fewer manpower hours attached to it, we're also able to run these scenarios that were only a twinkle in our eye in the past," Smith says.

Carter's has embraced Anaplan and demonstrated vision in the way that it has uncovered a range of benefits from the new solution.

Today, Carter's continues to refine the Anaplan supply chain tool, and the platform allows the retailer to build and expand as needed, adapting calculations and processes as the business evolves.

In addition, Carter's has implemented Anaplan's assortment planning and financial planning applications and is currently moving toward a fourth application focused on the connected enterprise. More applications potentially are on the horizon.

"Carter's has implemented three enterprise-grade applications in a multi-billion-dollar corporation," says Smith. "And we believe it is the most powerful, fastest, and compelling use of our dollars that we can find in the marketplace."