International Intermodal: Containers on the Move 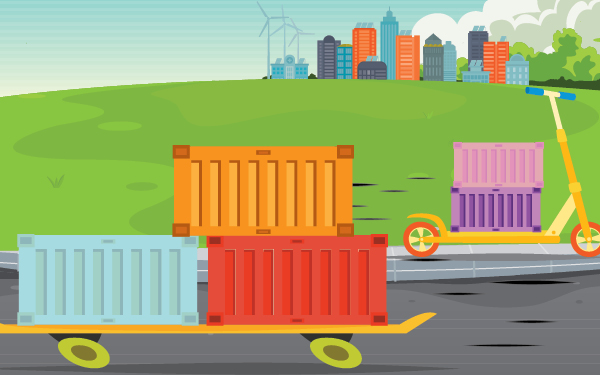 As container volumes rise, shippers hop on board with new IT solutions to contend with chassis and driver shortages.

Given the recent growth in container traffic, shippers and their service partners seek new technology and innovations to keep intermodal containers moving smoothly and cost-efficiently.

The challenge appears daunting when you consider these numbers: More than 2.4 million 20- and 40-foot containers flowed through North American ports in the third quarter of 2018. International intermodal volumes for July through September 2018, compared with the same period in 2017, increased by 4.4 percent, according to the Intermodal Association of North America. That followed a year-on-year gain of 4.8 percent in the second quarter of 2018, and 7 percent in the first quarter.

That expansion is good news for the economy. But lively intermodal traffic also strains the capacity of transportation networks to get all those boxes where they need to go. Here's how companies and technology are stepping up to meet these new challenges.

One indication of the strain the increase in traffic volume creates is the ongoing chassis shortage. A chassis is the equipment a shipping container rides on as it travels over the road. When a container ship unloads at a port, a shortage of chassis to take each box to a rail terminal or road delays the flow of goods.

Why a Chassis Shortage?

Drayage carriers can't always find enough chassis to move customers' freight for three reasons. One stems from the fact that over the past 10 years, ocean carriers—which, in the past, used to own the chassis—have been selling off that equipment to major leasing companies.

The chassis owned by the leasing companies tend to be old—about 18 years on average. "Obviously, older equipment needs more maintenance and repair," says Dave Manning, president of Nashville-based drayage company TCW. And, of course, a chassis that's in the shop isn't available for use.

A second reason for the shortage is that even when there's enough total equipment to meet current needs, supply and demand may suffer from a geographical mismatch, and current pricing models don't create incentives for repositioning empty equipment.

In late 2018, the trade war between the United States and China put a third strain on chassis capacity. "Many importers pushed to get the product in before the tariff increase," Hoehn says.

To help improve the situation, 12 motor carriers, including TCW, have formed the North American Chassis Pool Cooperative (NACPC), collectively purchasing about 20,000 new chassis and making them available, at cost, to pool members and other trucking companies.

"As a motor carrier, it's in our interest to make sure there's an adequate quantity and a good quality of chassis," Manning says. The new chassis need less maintenance and come with modern features such as LED lights, radial tires, and antilock braking systems.

Milestone Chassis, too, has bought new chassis with modern features, making them available for long-term or daily rental through 40 depots in 24 cities. The company also lists its units on the Chassis Finder network. "Chassis Finder users can book that equipment and take it out for daily or short-term use when they have shortages at the port," Hoehn says.

In California, Milestone provides chassis to a private pool operated by the Harbor Trucking Association, a coalition of drayage carriers at the ports of Los Angeles, Long Beach, and Oakland. "Our facility now operates around the clock, so it provides equipment to the carriers who are making deliveries at night, which is most often when the terminals run out of chassis," Hoehn says.

Besides keeping more chassis out of the shop and on the road, the arrival of newer equipment could help alleviate another problem plaguing international intermodal transportation—the driver shortage.

Drivers hate the out-of-date, poorly maintained chassis often found in the large chassis pools. "At TCW, drivers have quit because of the quality of the equipment they're expected to move," says Manning. Drivers hauling newer chassis are less likely to lose time and money to breakdowns.

Pay has lagged over the past 10 years because shippers have pressured carriers to keep freight costs low. But now that the market has recovered from the 2008 crash, carriers can improve compensation. "AIS has given drivers three increases this year," Banton says. Those raises haven't lured many new drivers into the industry, but better pay helps AIS keep the drivers it has.

For shippers that use rail to move international containers, one trend helping to offset the shortages is the development of on-dock rail at some marine terminals. "Shippers can avoid that one dray leg if they can work through a pier that has on-dock rail," says Glenn Riggs, senior vice president, corporate strategy at Odyssey Logistics in Danbury, Connecticut.

When a large vessel unloads a great many containers, on-dock rail can reduce congestion in the terminal. "Putting those containers all on a rail service can expedite the movement of containers off the pier and effectively reduce the time the vessel is in port," says John Nikolich, vice president, international transportation management at Odyssey.

Of course, shippers still need a dray from a rail terminal to the final destination. One strategy for ensuring capacity for that leg is to become a preferred shipper, the kind that turns equipment fast, so the driver isn't left idling while the customer loads or unloads. "There's a lot of activity to make the trucking leg more efficient to gain better use of these limited assets to keep up with demand," Riggs says.

In some regions, a series of weather disasters has also limited intermodal capacity. For example, Banton points to Hurricane Florence, which ravaged the Carolinas in September 2018. The heavy rains bypassed Charleston, where AIS is based, but vessels that were due in port stayed at sea to avoid the storm. "For four or five days, nothing moved," Banton recalls. "All the roads stayed closed for one week."

As conditions eased and ships started to arrive, transportation companies had to work their way through the backlog, unloading containers and explaining to customers why shipments would arrive late.

To offset some of these challenges, shippers and their partners are embracing a variety of IT-based solutions. One newer tool is Port Optimizer, an information portal that GE Transportation piloted at the Port of Los Angeles in 2017 and, in an enhanced version, at the Port of Long Beach in 2018.

Shippers and other stakeholders currently check numerous websites and systems to get data for tracking containers and planning freight movements. This is time-consuming, and it includes "black hole" periods when no information is available. Today's huge container ships may spend four or five days unloading at one terminal.

"During those four or five days, some beneficial cargo owners (BCOs) simply don't know where their cargo is in the process," says Jennifer Schopfer, vice president of GE Transportation Transport Logistics in Atlanta.

Port Optimizer collects data from stakeholders' management systems and presents it through the portal. There, users find information such as vessel location and status, container availability, and chassis inventory.

A cargo owner receives updates from the time a container leaves the port of origin through the time it's ready to be picked up at the destination. "This helps from an inventory planning perspective," Schopfer says. During the pilot in Long Beach, companies received data about incoming shipments 14 days earlier, on average, than they had in the past.

Carriers also can receive data on incoming containers, allowing them to plan pickups more effectively. As more BCOs, trucking companies, and terminal operators adopt the system, truckers should be able to get in and out of the terminals faster, Schopfer says.

Advent Intermodal Solutions, in Murray Hill, New Jersey, also offers a portal for data on cargo moving through ocean ports. "EModal is a large port community system that connects hundreds of ports, marine terminals, and depots, primarily with truckers, allowing them to get container locations and status updates, make pickup and dropoff appointments, and pay fees, all through one website," says Allen Thomas, chief strategy officer at Advent.

For shippers and third-party logistics (3PL) providers, Advent offers eModalPRO Data Services (EDS), a version of eModal that automates many of its functions. Using a suite of application programming interfaces (APIs), EDS connects to stakeholders' dispatch systems or transportation management systems (TMS), letting them see when and where to expect their cargo and helping them control container movements, without needing to use the portal.

To illustrate, Thomas poses the case of a shipper importing 20 containers from Asia to the Port of Los Angeles. "All we need from the shipper's TMS is notification—via API—of the container IDs and the associated vessel or port," Thomas says. EDS then starts searching the eModal network of terminals to see where that cargo was scheduled to be discharged.

Once the system confirms a delivery at a specific terminal, it continues to share any updates it receives from the terminal, including information on container availability, holds, fees due, and estimated time of arrival. "If the shipper knows which trucker will complete the port dray, we can share all this information with them as well, and even allow for any terminal-mandated appointment to be secured or fee paid," Thomas says.

EDS simplifies the job of monitoring cargo and arranging to move it inland. "Searching for and tracking updates on just a single container, then making an appointment and finally paying a clearance fee to collect the box, could take 20 minutes," Thomas says. EDS speeds that process considerably.

Another visibility service from ocean carrier Maersk lets companies that ship cargo in refrigerated containers monitor their location, along with the temperature, humidity, and oxygen levels in each box.

Shippers who use the Remote Container Management (RCM) web portal can monitor their cargo the entire time it's in the container, including the time when a truck is hauling the container, if Maersk is responsible for that leg. Shippers use the system to receive data on about 80 percent of the refrigerated cargo that Maersk handles, says Anne-Sophie Zerlang Karlsen, head of refrigerated cargo.

"Many customers are able to make better decisions about their supply chains," Zerlang Karlsen says. In the past, for example, a shipper wouldn't learn that a shipment of bananas traveled under incorrect conditions until the end of the trip, when an opened container revealed a load of spoiled fruit.

"RCM alerts shippers if something goes wrong," she says. The shipper can then work with Maersk to mitigate the situation.

RCM also helps cargo owners engage more effectively with vendors. For example, a company that imports lettuce might require its supplier to pre-cool that produce before loading. "With RCM, they are able to detect the cargo's temperature when they put it into the container," she says. "They can see if there's something wrong with how the suppliers handle the cargo, and can use that information to manage the process."

Given recent traffic growth, shippers and their service partners are likely to welcome these kinds of IT innovations, along with other strategies that keep international intermodal containers moving smoothly and cost-efficiently.