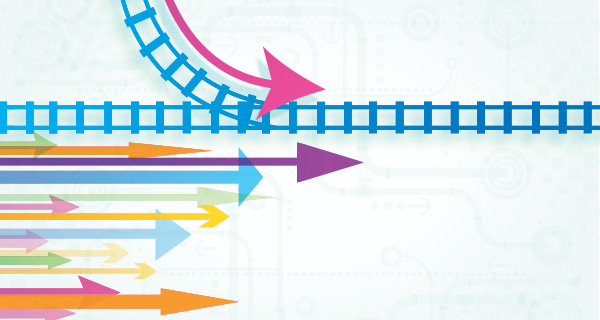 The demand for supply chain efficiency and speed points to investing in and maintaining U.S. rail/intermodal infrastructure.

As shippers continue to increase demand for supply chain efficiency and speed, and focus their attention on improving the environment by reducing emissions as much as possible, U.S.-based transportation organizations are investing considerable funds in either developing or restoring their rail/intermodal infrastructure.

Currently, the United States is home to approximately 1,100 intermodal facilities, including container yards, depots, and rail terminals, according to the Intermodal Association of North America. This aggregate, especially for rail terminals, is expected to rise in the coming years.

"As intermodal service continues to improve, it presents a compelling story for shippers looking to capitalize on potential cost savings," he adds.

On April 1, 2014, Omaha, Neb.-based Union Pacific (UP) opened a 2,200-acre rail facility in Santa Teresa, N.M. The Santa Teresa Intermodal Ramp was a $400-million investment. In addition to its prime location along UP's Sunset Route, a 760-mile rail line that connects El Paso to Los Angeles, the facility also offers shippers a variety of logistics efficiencies.

The facility's intermodal ramp currently offers an annual lift capacity of 225,000 units, and is capable of growing to 700,000 units as it attracts new customers. An eight-lane automated gate system improves truck turn times, as well as gate and terminal throughput. Much like the intermodal ramp, the system can also be expanded—to 12 automated gates—as volume rises. Of equal importance, the facility maintains 74,000 feet of track, which can potentially rise to 145,000 feet if necessary.

Given the fact that the facility is located at a site that Union Pacific believes is pivotal for shippers interested in reaping the economic benefits of shipping freight by rail, along with the notion that rail transportation is four times more fuel efficient than trucking (a statistic previously released by the rail carrier), the ramp is expected to have an overall economic impact of at least $500 million. The facility also has created hundreds of permanent jobs for residents in surrounding communities. In fact, by 2025, when the facility is projected to reach full capacity, it will employ more than 600 workers.

To expand its service offerings and capture a share of the 9 million truckloads that are potential candidates for intermodal conversion in the East, Jacksonville, Fla.-based CSX Transportation has invested more than $700 million in its intermodal network since 2011.

"CSX is building the intermodal network of the future, which includes considerable investments in new and expanded terminals," says Wesley Ann Barton, director of intermodal marketing for CSX Transportation. "We are investing in network flexibility that can quickly and nimbly adapt to changes in the market environment, including any potential shifts in freight flows.

"Significant infrastructure development is needed and underway at East Coast ports, and efficient rail connectivity will be a key factor to success," she adds.

In 2011, CSX opened its 500-acre Northwest Ohio Terminal in North Baltimore, Ohio, a suburb of Toledo. The $175-million investment currently handles at least 30 trains per day, resulting in an annual throughput capacity of nearly 2 million containers.

Since 2011, the terminal has operated on 24,000 feet of working track; seven wide span cranes currently service eight tracks. Each crane measures 100 feet high and 95 feet wide, weighing in at more than 1 million pounds each. In addition to the working track, the terminal also provides 100,000 feet of block swapping track, as well as parking for approximately 280 units.

To further serve its customer base, CSX invested nearly $40 million in an expansion project in 2015. As a result, the terminal will now be able to handle up to 1 million lifts annually, an increase of approximately 50 percent.

"Traditionally, shippers have turned to intermodal rail to move freight more than 1,000 miles," Barton says. "But, thanks to infrastructure developments, shorter lengths of haul—500 to 1,000 miles long—can be good candidates for intermodal conversion opportunities.

"By identifying and converting sub-optimized freight from the highway to intermodal rail, shippers can realize immediate and long-term benefits, including the ability to secure access to scalable capacity, reduce freight transportation costs 10 to 15 percent, and cut carbon emissions by 75 percent, when compared to moving freight solely over the road," she adds.

As the largest port complex in the United States, the twin ports of Los Angeles and Long Beach are well regarded as the Pacific gateway for products that are imported from Asia. In response, Carson, Calif.-based Watson Land Company, one of the country's leading industrial developers, has created millions of square feet of master-planned centers that are located less than 20 minutes away from the complex.

In addition to proximity to the ports of Los Angeles and Long Beach, the company's master-planned centers are also close to Union Pacific's Intermodal Container Transfer Facility, which serves multiple shipping lines, and a BNSF Railway intermodal facility.

As a further means of cost reduction, Watson Land Company also has a Foreign Trade Zone (FTZ) designation on more than 8 million square feet of its distribution buildings. Through the FTZs, Watson Land Company can significantly reduce operating costs, particularly through methods such as single weekly entry of containers, which reduces merchandise processing fees, and duty deferral.

Aside from its accumulation of property, the CIC-Joliet/Elwood also offers logistics professionals an ideal location, as it can reach 65 percent of the country's population within a one-day drive. Consequently, two of the world's largest Class I railroads, BNSF Railway and Union Pacific, operate intermodal rail terminals on the property.

The 770-acre BNSF Logistics Park Chicago is considered North America's most active inland rail terminal, as it provides international intermodal service to and from each of the West Coast's primary ports. On the other hand, the 835-acre Union Pacific Intermodal Terminal, which opened in 2010, offers international and domestic service to and from every West Coast port.

A rise in intermodal facilities across the United States is leading to the development of industrial real estate hotspots—areas in close proximity to multiple transportation modes and population centers—according to Murphy.

"Organizations that capitalize on intermodal have more options for moving goods, making them less likely to experience increased expenses or unanticipated delays due to natural disasters, infrastructure concerns, or other supply chain fluctuations," Murphy explains.

Intermodal's bottom-line savings potential has driven the development of industrial real estate. "As firms seek new ways to cut costs, the prospect of having immediate access to cost-effective transportation methods more than offsets the initial investment of relocation or facility development," he adds.

According to a survey conducted by Georgia College and the University of Tennessee, 36.7 percent of shippers view cost reduction as their first priority in 2015, a 4.5-percent rise over 2014's findings.

And, the Council of Supply Chain Management Professionals finds that more than 60 percent of supply chain costs are associated with transportation-related expenditures.

"Shippers can reduce transportation costs and secure access to alternative capacity by diversifying their modal portfolio and incorporating rail for freight moves longer than 500 miles," says Barton. "Furthermore, by locating near intermodal terminals, shippers can easily access a reliable source of scalable capacity that can cut transportation costs by 10 to 15 percent, when compared to truck-only freight moves."

When evaluating intermodal service, make sure these two features are available.

24/7 accessibility. Intermodal rail terminals should have 24/7 accessibility, which provides carriers maximum flexibility, particularly in the times they can pick up loads and bring them into ramps (at origins), or pick up at ramps and deliver to customers (at destinations).

"In contrast, a terminal that is accessible only eight hours per day, five days a week results in a higher cost to serve because all the work needs to be concentrated in a tighter window of time," says Tom Bartel, director of intermodal strategic planning for Schneider, a transportation services provider based in Green Bay, Wis. "Terminals with fewer operating hours can still offer excellent service, but the cost of providing that excellence is higher."

But lower density levels do not automatically result in low service or high cost. "For example, terminals closer to a shipping or receiving point can provide lower dray costs versus a more dense long dray coverage from a larger ramp," Bartel says.

"Or a smaller location may enable a more customized solution, versus the standard options available at a larger location," he adds. "There are always tradeoffs, but in general, density enables low-cost, high-service options."