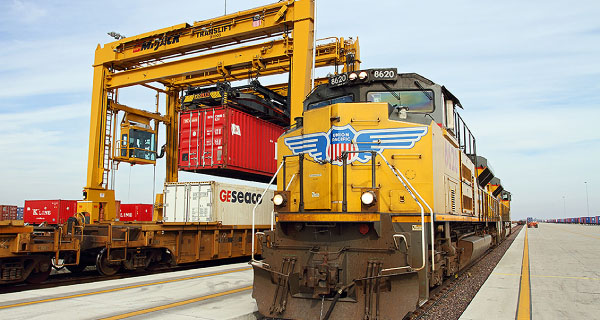 The U.S. rail network's 140,000 miles of track could cross the country 47 times. Many changes have affected this extensive system since the 1980's Staggers Act deregulated the rail industry, thanks largely to the $480 billion U.S. freight railroads have invested over the years to maintain and modernize the national rail network (see Figure 1).

In 2010 alone, the seven largest North American railroads, known as Class I railroads, spent approximately $10.7 billion on capital investments. In 2011, their anticipated spending is $12 billion—approximately 40 cents of every revenue dollar, according to the Association of American Railroads (AAR). Many railroads spend more on their infrastructure than some states do on highways. In 2008, for example, Union Pacific (UP) spent $4.91 billion on infrastructure, while the state of New York spent $3.82 billion on highway construction and improvements (see Figure 2).

In 2010, freight railroads spent a record amount on capital expenditures—approximately $10.7 billion to build and expand network infrastructure and purchase equipment. Further, all the major Class I railroads have publicly announced planned capital spending programs in 2011 that will be greater than those in 2010.

The Chicago Region Environmental and Transportation Efficiency Program (CREATE). Developed to address issues in the nation's busiest rail gateway, this partnership between Illinois; Chicago; Metra, the northeast Illinois commuter rail system; Amtrak; the U.S. Department of Transportation (DOT); and six railroads includes construction of 31 new overpasses and underpasses; enhanced grade crossing safety; and extensive upgrades to tracks, switches, and signal systems. With an estimated cost of $3 billion and target completion date in 2030, the project is expected to create 2,700 jobs, and deliver $1.1 billion in air quality improvements and $595 million in safety benefits.

The Crescent Corridor. This partnership between Norfolk Southern (NS) and 13 states spans 2,500 miles of rail infrastructure. NS expects improvements from the $2.5-billion project will allow it to handle increased traffic more efficiently and remove an estimated one million trucks from congested roads.

The Transcon Corridor. BNSF has invested $1.8 billion in the corridor, which spans 4,647 miles and 13 states, connecting the ports and markets in California and the Southwest to the Midwest, Texas, and the Southeast.

The National Gateway. This CSX project spanning six states and the District of Columbia will improve efficiency and routing in the corridor connecting the mid-Atlantic ports and the Midwest. The price tag is $842 million, and completion is slated for 2015.

UP's commitment to intermodal runs deep. Its other recent projects include a $370-million expansion at Joliet, Ill., in 2010. The railroad has added 65,000 domestic containers and has expanded services aimed at competing with single-driver truckload moves from the West to the Midwest. UP estimates there are opportunities to convert 11 million truckloads to rail intermodal, and believes it can compete on time, service, and cost with single-driver truckloads between Los Angeles and Chicago; Chicago and Dallas; northern California and Chicago; and Los Angeles and Dallas.

With a fixed infrastructure, railroads offer finite capacity, but are investing some capital dollars to increase capacity by adding parallel tracks along certain mainlines. Union Pacific, for example, is "double-tracking" its Sunset Route and portions of the Los Angeles-El Paso route.

UP is also looking for other opportunities to double-track, such as in Blair, Neb., located on its Central Corridor. "There are two routes around Omaha," explains Lange. "The Blair route is 25 miles shorter, which saves time and fuel. Double-tracking along that route will also increase velocity."

Another UP initiative is its new Plant-to-Port transportation and transload program, which provides product transfer from covered-hopper unit trains directly to marine containers at the railroad's Yermo, Calif., facility. The program includes double-stack intermodal train service on dock to the ports of Los Angeles and Long Beach.

"Demand from Asia is driving DDG, grain, and grain products export growth to the West Coast, and UP offers those markets a source of empty marine containers, freight delivery, and throughput capacity," Hammes adds.

Domestic and international intermodal volumes posted solid gains in the second quarter of 2011, according to the Intermodal Association of North America (IANA). Domestic container volume grew nine percent year-over-year—a stronger pace than during the previous two individual quarters, notes IANA's Intermodal Market Trends & Statistics report. The rate of increase is especially impressive because it is being compared to the highest gain recorded (16.4 percent), which was posted in second quarter 2010.

North America's Class I railroads may get the majority of the attention when it comes to rail freight volumes and infrastructure spending, but Class II short lines and regional railroads account for 33 percent of U.S. freight rail mileage and 11 percent of rail employees. The more than 550 short line and regional railroads operate in every state except Hawaii, according to the AAR. These railroads often feed traffic to Class I railroads and receive traffic from Class I's for final delivery. They operate 45,187 miles of track, compared with 93,921 miles operated by the Class I's.

Growth poses a challenge for smaller railroads, according to Steve Wait, executive director of business development for the Cleveland Commercial Railroad Lines. "Class I railroads such as CSX and Norfolk Southern work with as many as 250 short line railroads," Wait told executives at the Northeast Ohio Trade and Economic Consortium's annual logistics conference. "Getting time to talk about innovation and new opportunities can be difficult when you are one of 250 small, niche suppliers."

Nonetheless, that's just what Wait and his railroad are looking for. Working with the Port of Cleveland, Wait hopes to create the Cleveland Harbor Belt Railroad to facilitate switching on the dock at the port.

A larger short line railroad, the Florida East Coast (FEC) Railway, operates 351 miles of mainline track and 60 percent of its business connects to Class I railroads, according to James Hertwig, FEC's president and CEO.

"With its second-day service through Charlotte or Atlanta, many of FEC's loads are coming from motor carriers—a large number of which are owner operators," Hertwig says.

"Because South Florida is not a manufacturing center, truckers have one northbound load for every four southbound loads," he adds. "FEC hauls back the empties."

But the railroad doesn't look at its intermodal business as strictly northbound or moving empties. In true intermodal fashion, it hauls loads on its trucks from Savannah to its own ramp for a rail move, for instance. FEC is also developing capabilities at the Port of Miami and Port Everglades.

"The $50-million railway project at the Port of Miami is a small part of a larger development," says Hertwig. The railroad sees it as a vital link to the national rail network, which will grow increasingly important as larger freighters begin passing through the expanded Panama Canal and calling at U.S. East Coast ports—including Miami. The first train is expected to run on the rebuilt track at the Port of Miami by mid-2012, well ahead of the expanded Panama Canal opening in 2014.

"One train will be roughly equivalent to 280 trucks," Hertwig says. "FEC could be hauling as many as 40,000 to 60,000 containers out of the Port of Miami and Port Everglades." That volume accounts for 10 percent of the Port of Miami's current throughput, and could grow to 15 percent after the opening of the Canal's expansion.

This connection will be attractive to ocean carriers, suggests Hertwig. But because South Florida is a large consuming market, all this rail service won't eliminate local dray operations.

BNSF has tripled its capacity at Logistics Park-Kansas City. The combined 1,000-acre development includes the BNSF intermodal and vertical-ready sites, offering seven million square feet of warehouse and distribution space. And, Phase 1 of the 800-acre KCI Intermodal Business Centre is ready for vertical development on a total of 140 acres.

In addition to substantial infrastructure investment, the area is seeing the introduction of new intermodal rail services. Swift Transportation announced a new container-on-flatcar intermodal service to and from Mexico with rail partner Kansas City Southern (KCS) and its Kansas City Southern de México S.A. de C.V. subsidiary. Swift, which owns more than 6,000 53-foot containers equipped with GPS satellite tracking systems, will continue to offer its trailer-on-flatcar service to and from Mexico.

A number of factors—potential truck driver shortages, possible Hours-of-Service rule changes, and new truck safety compliance regulations—are driving interest and investment in intermodal projects. Even without a significant improvement in the U.S. economy and consumer buying trends, motor carrier rates are beginning to rise. UPS Freight got out in front of the industry with its recent general rate increase, averaging 6.9 percent and covering non-contractual shipments in the United States, Canada, and Mexico.

The first rate increases typically set a market expectation, and others pick their positions relative to what they see in these early announcements.

Spot market rates were trending up in mid-September 2011 after two months of seasonal decline, according to transportation data and technology provider TransCore Freight Solutions' Truckload Rate Index. Van rates were already up 3.1 percent compared to August 2011, and reefer rates had rebounded 2.6 percent.

Rates, and a desire to reduce transportation costs, motivate many shippers to step up their use of intermodal services. Some macro issues come into play as well, however, says David Bennett, USA director of sales for global multimodal provider Geodis Global Solutions.

"As capacity increases and vessels grow larger, carriers will feel pressure to turn equipment much quicker, or they will be faced with severe equipment shortages on the key head-haul lanes," he adds.

There is a growing theory that ocean carriers in the Transpacific will adopt a similar model to the one deployed in Europe: port-to-port only. "As this happens, shippers with distribution points in the Midwest, and other points such as Memphis, will be forced to the West Coast transload model, which will increase demand for domestic intermodal services," Bennett says.

Domestic intermodal providers are gearing up for this increase in demand, and new equipment is entering the market at a rapid pace.

By all accounts, intermodal growth and the infrastructure investments to support it, are, at best, just trying to keep pace with demand.

Related Articles
Houston, We've Got a ProblemIntermodal Rail: Moving in the Right DirectionHow the Hub-and-Spoke Model Can Improve Distribution for Rail NetworksIntermodal Transportation: Rise and ShineSupply Chains that Rock Around the Clock: Everybody's Doing the LocomotionO Canada!Riding the RailsRail Freight: What’s Coming Down the Track?Global Ports: A Boatload of OpportunityIntermodal Transportation’s Solution to Our Evolving Supply Chain Demands More related articles...