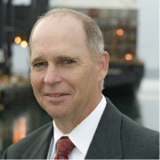 In its March 2013 Report Card for America's Infrastructure, the American Society of Civil Engineers (ASCE) included port infrastructure for the first time in its comprehensive infrastructure analysis. ASCE's reports are instrumental in showing the need for infrastructure investment, and the economic impact of its neglect.

Advocating for increased federal investment in seaport-related infrastructure—including both landside and waterside connections—has been a priority for the American Association of Port Authorities (AAPA) for many years.

Having a respected third party such as ASCE helping to tell this story strengthens the argument for increasing federal investment in port-related infrastructure, and supports studies published previously by groups such as the World Economic Forum and Building America's Future.

This grade is primarily due to the generally poor condition of the connections into and out of U.S. seaports, and the knowledge that the nation's growing trade volumes will exceed the capacity of current port-related infrastructure.

The grade affirms AAPA's position that while seaports and their private sector partners plan to invest more than $46 billion over the next five years in port infrastructure, the federal government isn't upholding its end of the partnership.

At the current pace of investments in infrastructure connecting with ports, America's growing trade volumes will soon exceed—and in some cases may have already exceeded—the ability of these networks to efficiently and cost-effectively handle the necessary movement of goods.

To better reap the dividends that ports provide, the federal government must fully consider the vital importance of federal funding in and around America's seaports. Nearly one-third of the nation's gross domestic product is derived from international trade. Furthermore, seaport activities—which handle 99 percent of the nation's overseas trade—generate more than 13 million high-paying U.S. jobs and $200 billion per year in federal, state, and local tax revenues.

Seaports are the nexus of critical land and waterside infrastructure that connects America's farmers and producers with markets overseas and provides access for imports of raw materials, components, and consumer goods that are a key part of U.S. manufacturing and standard of living.

When you think about ports and the value they provide America's consumers and businesses, don't just think of ships, cranes, and stacks of cargo within the ports. Think about the highway, rail, and navigation channel connections to ports, and how federal investments in those connections will enable port facilities improvements to pay the greatest dividends for the nation.