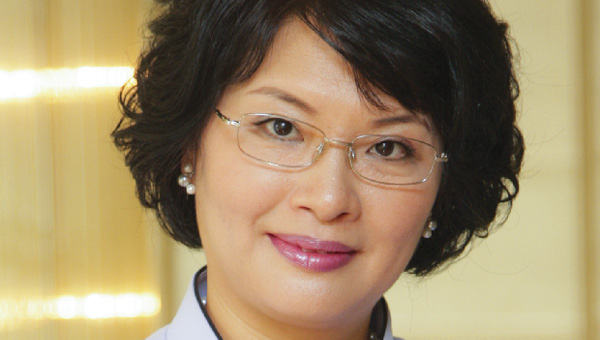 Hu Huang is director of international logistics and customs compliance at Kichler Lighting in Cleveland, which is among the top one percent of importers in the United States. She has worked for Kichler since 1988, and served in her current position since 2002.

In 1985, I came to the United States with a full scholarship to study economics as a graduate student at the University of Cincinnati. I had a very hard landing in the Land of Opportunity. I faced a language barrier and culture shock. I felt homesick. And worst of all, having grown up in a country with a centrally controlled economy, I'd never even heard of basic economic concepts such as supply and demand.

When I started at Kichler in 1988, I worked in imports and exports. Since then I've been involved in international trade, with a focus on global opportunities. For example, I set up six regional offices in Asia, worked on new product development, imported product from 16 countries, managed international letters of credit, designed global transportation networks, and created systems to enhance supply chain security.

One of the most challenging aspects of my work is the need to control all the variables that come into play in complex international transactions. A good example is when I managed a direct export project that involved five countries. Kichler was in the United States, the buyer was in Saudi Arabia, the manufacturing base was in China, the buyer's agent was in London, and the letter of credit was issued by a bank in Lebanon.

I had to deal with four languages, four time zones, and more than 20 parties—a manufacturer, a trucking company, customs attorneys, ocean carriers, an insurance company, and others. In a situation such as that, knowledge and experience are power. And when challenges arise, you have to be decisive.

One of my proudest accomplishments at Kichler is our perfect performance in customs compliance and supply chain security. Under my leadership for the past 20 years, Kichler has not incurred any trade violations or customs penalties. This saves us millions of dollars, and sends our products to market faster than our competitors.

Some keys to that achievement are knowing our responsibilities, implementing new laws and regulations, updating written procedures and policies, conducting frequent self-audits, monitoring key performance indicators, and keeping import and export activities as transparent as possible.

We also make a point of educating our staff and vendors. In this business, success takes a village—not just the efforts from my side. So every year I hold seminars in China.

Most importantly, we treat our vendors and logistics providers as partners. Most of our vendors have been with us for years. We've developed a good corporate culture: we identify the responsibilities, then help one another succeed.

What was your first job?

During China's cultural revolution, the government sent me to work on a farm for five years. I earned $15 or less per year, or nothing if the harvest was poor.

Do you have a hidden talent?

I'm an amateur photographer. I like to capture beauty in nature, and keep a history of my life and family.

If you could take back one sentence you've ever spoken, what would it be?

About 15 years ago, while I was still improving my English, a co-worker taught me the expression, "Good riddance." He said it meant, "Goodbye, so long, farewell." Four hours later, I decided to practice my new sentence—on the chairman of Kichler's board. When I discovered my mistake, I demanded that the co-worker tell the chairman the truth. I learned a lesson: always check the meaning of words before you use them.

If you had a week to devote to anything but work, how would you spend it?

With my husband, our son, and my mother, visiting parks and nearby cities to enjoy various cultural festivals. I also like to cook and garden, often while listening to audiobooks.