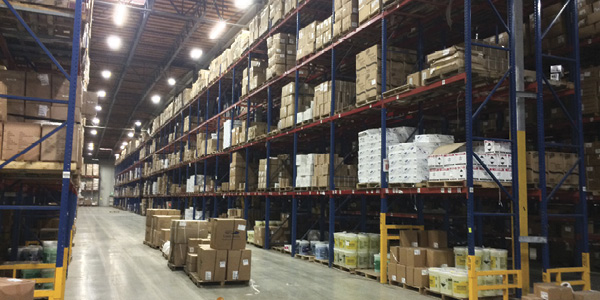 American Hotel Register Company's 150-year-old history dates back to the Lincoln presidency. In those days, the company was a hotel registry printer. It later expanded its business from printing into the distribution of hospitality industry supplies. Today, Vernon Hills, Ill.-based American Hotel Register offers 50,000 items, 1,600 national brands, more than 2,500 best-value registries, and an expanding portfolio of eco-friendly products.

The company's global supply chain includes ownership of the Amsterdam-based Intros Hotel Supplies, which markets its products mainly in Europe, the Middle East, and Africa, and its extensive network of distribution centers throughout the United States, Canada, and the Caribbean.

"As late as 2005-2006, we were still operating a relatively small distribution network," says Kevin Baker, American Hotel Register's director of distribution. "We realized then that we had outgrown our ability to handle the business growth that we were experiencing, so we made a decision to look into new technology that could stay in step with this growth."

At that time, American Hotel Register was doing its warehouse picking manually, using information on Excel spreadsheets. "We brought in a simple WMS in 2006, and it fit perfectly with our organization at that time, but our business growth soon outpaced it," says Baker. "We continued to modify the system so we could keep it tuned to the business, but we got to a point where it wasn't possible to enhance it anymore."

Because it serves a hospitality industry that is acutely sensitive to its customers and strives for the highest levels of customer satisfaction, American Hotel Register was likewise keenly aware that its clients expected no less from their trusted suppliers.

"We want to meet our customers' needs quickly, and we know that optimizing warehouse performance is central to doing that," says Baker. "If we could introduce more operational automation, such as automated order dispatching, real-time reporting, and auto alerts on our order and inventory replenishment processes, we could get work done faster and reduce the amount of manual labor."

American Hotel Register also wanted to add Lucas Systems' voice picking technology, which would enable employees to move hands-free throughout the warehouse without having to hold an RFID phone in one hand, and wanted to link this into a new WMS to help improve overall efficiency in the warehouse.

"Change was one of the factors that we knew we would have to manage carefully, because our employees were used to the ways that they had been doing things, so they would be naturally resistant," says Baker. "What we told employees is just because a business process might be different doesn't mean that it's wrong. Later, when employees saw the benefits of the new system, they understood why it was important to modify our processes so we could keep pace with our growth."

American Hotel Register was also concerned about integrating the new system into its warehouse operations. The pre-planning and process/system mapping that the company had performed with IBS Dynaman helped considerably in this area, as the joint project team was able to determine where specific changes needed to be made in either software or business process.

"We knew going into the project that we were going to experience pain points with a system change, and where those pain points were likely to be," says Baker. "We did experience these pains over the first two or three weeks of implementation, usually because of an errant setting or a piece of code that needed to be changed, but the good part about the process was that everyone was on-site to address issues as they arose. We had a command center staffed with both our own and the vendors' leads on the project. The system was cutover to production in July 2015 and by the first or second week of August 2015, it was working well."

Just as critical was training employees on the system and getting them comfortable.

"We started preparing employees for the new system early on," says Baker. "We walked them through the system, and started training 30 days before system cutover."

The management team was trained in the first week. In the three weeks that followed, training was held for warehouse employees. All sessions were conducted on the actual system, which had been set up in a test lab environment. In addition to this system, employees also had to learn how to use the new Lucas hands-free headsets that would replace their RFID phones. These devices tell them which location to go to in the warehouse. Employees then read off a code and confirm the location and that the pick was done.

"We learned that in preparing employees for a new system, management was often the most challenging to work with," Baker says. "This group knew the old system well. They had a fear of losing control and their value as employees, because they had acquired expertise in the old system. But once we helped them overcome these challenges, they proved to be incredible partners in getting the new system implemented."

Baker says the team's other hesitation was system integration. "There were many pieces of systems and business processes that were involved, and you can conduct quality assurance checks on these items only to a certain extent. We knew we would just have to flip the switch," Baker says.

What made the task easier was a failover plan that could recover the company's old system within 15 minutes. "Fortunately, we didn't have to go into failover," says Baker. "The new system came up easily, and the process was seamless for our customers."

Now with a new system that can handle the needs of an expanding business, Baker sees immediate benefits in the warehouse.

"Our old system was manually intensive," he says. "It could take two hours to sort and process. Now we have system automation that can prioritize and orchestrate many tasks. This frees managers so they can get out on the floor more and collaborate with people from other company areas. In the course of implementing this system, we were also able to reduce our head count on the inbound materials side by one full-time employee, and then reassign that person to the outbound side."

The IBS solution "delivered everything we had hoped for in a WMS and more," says Baker. For other companies considering a similar system implementation, he offers several recommendations.

"It's important to have patience, because a total system and workflow transformation can't be done overnight," he says. "As you are making changes, a sound change management practice should be in place that takes into account not only system and process changes, but their impact on people who are already accustomed to a set of work practices. Finally, consider every possible way to improve your company's operations, and don't always conclude that the system must be modified; a change on the work process side might be warranted."