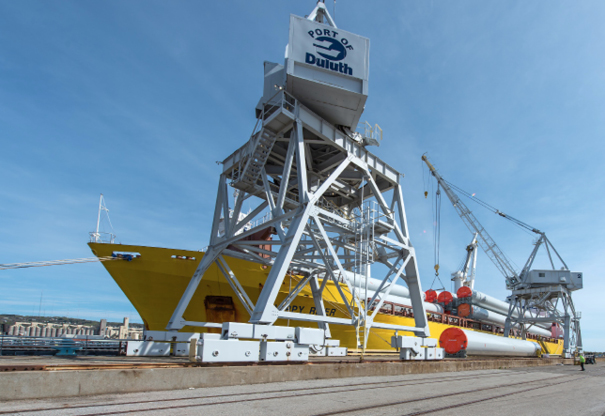 An increase in overseas wheat exports from the Port of Duluth-Superior is keeping overall tonnage on pace to beat the port's 2018 totals and five-year average.

Overall, St. Lawrence Seaway tonnage for the season (March 22 to September 30) reached 24.8 million metric tons, down 6% from 2018. The figures reflect a combination of factors including the decrease in U.S. corn and soybean exports from earlier in the spring and delays in the Canadian Prairie harvest due to wet field conditions.

September 2019 was a busy month for the Port of Duluth-Superior, with overall tonnage pacing slightly ahead of last season and the five-season average. Grain made a strong move in September, posting its second-highest monthly tonnage total of the season and narrowly outpacing 2018. General cargo movement continued steady, with wind energy cargo arrivals from overseas via the Seaway tracking toward a record total. In addition, iron ore tonnage outpaced the September 2018 total by 3%, putting it almost 16% ahead of the five-year average.

Shipments of limestone and petroleum products continued to lead the way at the Port of Green Bay in September, bringing its year-to-date shipping total to more than 1.6 million tons through September—17% ahead of 2018.

Overall tonnage through Port Milwaukee was up 25% as the port's handling of salt, cement, steel, and other specialty cargoes led the way this year.

The Toledo-Lucas County Port Authority reported a slight decrease in tonnage compared to the 2018 season. While coal, iron ore, and grain were down, general cargo, dry bulk, and petroleum numbers were up with robust aluminum shipments driving growth. The port also handled bulk sugar for the first time since 2015.