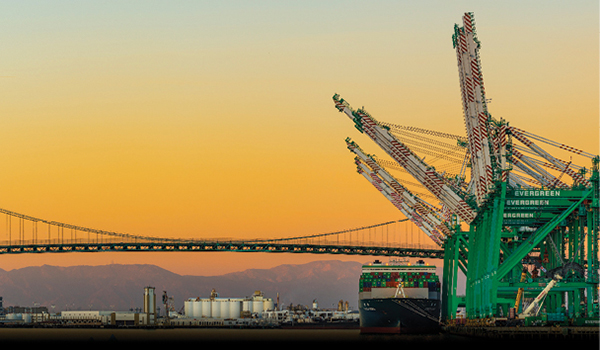 As global trade wars continue to escalate, the watchword at West Coast ports is uncertainty. "The 360-degree trade situation that includes China, Canada, and the European Union has created a great deal of uncertainty," confirms Gene Seroka, executive director of the Port of Los Angeles, which handles more container shipping by volume and dollar value than any other port in the United States.

Increased tariffs on goods imported from China have caused congestion and bottlenecks as importers front-loaded shipments at the end of 2018 to beat the first round of tariffs and again in the first half of 2019 before the June tariff increase. But West Coast ports face other challenges, as well. They include:

The Port of Los Angeles and its neighbors—the Port of Long Beach, the Port of Oakland, and the Northwest Seaport Alliance of Seattle and Tacoma—are tackling these challenges directly. Each is shepherding a range of strategic initiatives designed to help them stay ahead of anticipated—and unanticipated—developments.

Here's a snapshot to highlight what's new, what's coming, and what's noteworthy at each bustling port.

Ranked as the top container port in the United States every year since 2000, the Port of Los Angeles, located 20 miles south of downtown Los Angeles in San Pedro Bay, occupies 43 miles of waterfront. It includes both passenger and cargo terminals with automobile, breakbulk, container, dry and liquid bulk, and warehouse facilities.

The Port of Los Angeles is managing a number of initiatives designed to increase efficiency and manage volume growth while targeting zero emissions in 2030. The $34-million Terminal Island Railyard Enhancement Project announced in October 2018 is one of the port's most significant rail improvement projects.

The project will optimize on-dock rail operations and improve the flow of cargo while reducing truck trips, tailpipe emissions, and street and freeway congestion. It will expand an existing intermodal rail storage yard, adding more than 31,000 linear feet of track that will increase the number of storage tracks from six to 11. By increasing capacity and Pier 400 on-dock railyard use by up to 525,000 TEUs annually, the project will increase port capacity by about 10%.

In addition, the Port Optimizer software, developed with GE Transportation, is a unique cloud-based platform that digitizes maritime shipping data for cargo owners and other supply chain partners. The software provides secure access to real-time detailed information on ship cargo and location sooner than it was available in the past.

Knowing two weeks in advance, rather than two days, that a vessel and its cargo will arrive in port allows all parties to better plan and schedule transportation, assets, and labor.

Because the second-largest container seaport in the country is adjacent to the Port of Los Angeles, the two entities frequently share information and resources that help improve universal operations and efficiencies. Port of Long Beach includes 31 miles of waterfront on 3,520 acres of land stretching 5.5 miles.

Doubling Down on Rail

Currently, just 30% of containers leave the Port of Long Beach by rail. If the port is to meet growth projections, it needs to increase that percentage. Because combined Port of Los Angeles and Port of Long Beach volume is estimated to grow from 16 million TEUs in 2017 to 40 million by 2040, Long Beach is focusing its infrastructure improvements on doubling rail capacity.

The Pier B On-Dock Rail Support Facility Project is one of several rail expansion projects. It will reconfigure, expand, and enhance the existing Pier B rail facility to allow more efficient use of on-dock rail. Port terminals will be able to move cargo faster and more efficiently by assembling trains up to 10,000 feet long. This will ease roadway traffic and congestion while improving air quality.

Both the Port of Long Beach and Port of Los Angeles have collaborated on the 2017 Clean Air Action Plan Update that sets a goods movement goal of zero emissions. By 2030, terminal equipment will transition to zero emissions, followed by on-road trucks by 2035.

The port received nearly $80 million in grant funding from the California Energy Commission and the California Air Resources Board to move ahead with six projects that will demonstrate zero emissions equipment and advanced energy systems in its operations.

In operation for nearly 100 years, the eighth-largest U.S. container port, serving Northern California and Nevada, added service to Vietnam in April 2019. Agricultural exports, which make up 40% of the port's exports, are up 11% to date in 2019.

The Port of Oakland has achieved a number of significant infrastructure improvements; one currently underway has been more than one decade in the making. In 2018, the port raised four ship-to-shore cranes, opened a 283,000-square-foot Cool Port refrigerated distribution center, and finished expanding the TracPac marine terminal to double its size. Earlier in 2019, it purchased three more cranes to serve the larger vessels.

Construction is underway at the long-awaited CenterPoint Landing at the Seaport Logistics Complex, an ambitious project that represents a rarity at a West Coast port—a footprint expansion. The port is working with CenterPoint, a logistics-focused industrial real estate company, to turn half of the decommissioned U.S. Army base bordering the current port complex into a $52-million, 460,000-square-foot logistics facility.

Designed to better serve all supply chain participants while creating jobs, the project includes a commitment to train and hire labor locally. The property borders the recently built $100-million railyard, making it ideally situated for transloading.

The port has also added night gates and appointment scheduling to ease congestion and improve productivity.

The combined marine cargo operating partnership of the ports of Seattle and Tacoma is the fifth-largest container gateway in the country.

The ports are a major cargo center for bulk, breakbulk, project/heavy-lift cargoes, automobiles, and trucks. Top imports are machinery and furniture; top exports are oil seeds and prepared foodstuffs. Key facts include:

The new Gate Efficiency Program helps avoid backups and bottlenecks both on- and off-terminal during peak season in 2019 and 2020 by expanding gate hours at international container terminals.

With three participation options, terminal operators in Seattle and Tacoma will be reimbursed based on the number of weekly off-hour gates offered during the 18-month period.