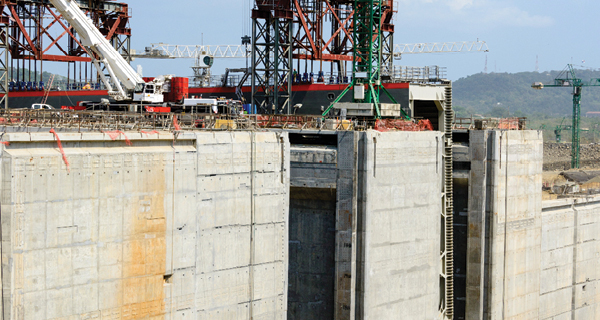 As the Panama Canal's $5.25-billion expansion nears completion, how are shippers and ports preparing?

The buzz around the Panama Canal expansion is reaching fever pitch as the unprecedented project, in its final stages, redraws the rules for global trade. In response, ports and other stakeholders have been investing in infrastructure to ensure products traveling through the expanded canal enter and exit the United States efficiently and expeditiously.

Many stakeholders in the U.S. shipping community view the expansion as a tremendous opportunity, as the ambitious upgrade is expected to significantly increase container trade between Asia and the United States.

The Panama Canal expansion is 94 percent complete and on track for its scheduled 2016 completion, reports the Panama Canal Authority (ACP). The expansion is the largest project at the canal since its original construction in 1907, creating an additional lane of traffic through a new set of locks. The existing locks allow the passage of vessels that can carry up to 5,000 TEUs. After the expansion is completed, post-Panamax vessels, with capacity up to 13,000 TEUs, will be able to move through the Panama Canal.

The expansion program's main objective is to increase capacity to meet demand growth with enhanced customer service, according to the ACP. The expansion is based on six years of research, which included more than 100 studies on economic feasibility, market demand, environmental impact, and other technical engineering aspects.

While this significant construction effort nears completion, the Panama Canal has already experienced significant volume increases, with record cargo tonnage in 2015. The recent spike in demand can be attributed, in part, to traffic diverted from the U.S. West Coast and a higher-than- normal volume of shipments requiring additional security measures, including tankers and gas carriers, reports the ACP.

In Georgia, work is well underway on the Savannah Harbor Expansion Project (SHEP), an effort designed to support increased volumes from the Panama Canal expansion and other factors shifting trade from the U.S. West Coast to the East Coast.

By deepening the Savannah River to 47 feet at mean water level, SHEP will enable the port to more efficiently serve the larger vessels that are expected after the Panama Canal expansion is complete, according to the Georgia Port Authority (GPA). Vessels in this class, which are already calling on the Port of Savannah, will be able to do so with heavier loads and greater flexibility once the deepening project is finished.

In addition, the port is purchasing four ship-to-shore cranes, which will bring the total number of electric-powered container cranes to 26. Savannah is also adding 30 electric rubber-tired gantry cranes (RTGs), continuing GPA's transition of its container handling fleet to electric power, and bringing its RTG fleet to 146.

Beyond the terminal gates, the Georgia Department of Transportation will complete the Jimmy Deloach Parkway extension by spring 2016, providing a direct truck route between I-95 and Garden City Terminal.

The GPA expects cargo expansion as a result of the widened Panama Canal to be incremental, but steady, as shipping lines take advantage of the cost savings of an all-water route to serve the U.S. Southeast market, one of the fastest growing regions in the nation.

"The number of megaships calling on Savannah is expected to increase with the expansion of the Panama Canal," says a GPA spokesperson.

Down in Florida, PortMiami has already invested more than $1 billion in capital infrastructure projects that are now complete. The port currently offers super post-Panamax gantry cranes that can service cargo vessels up to 22 containers wide, nine containers above deck, and 11 containers below. Additionally, a completed -50/-52-foot dredge project now allows the port to accommodate the largest container vessels sailing the oceans, including neo-Panamax vessels that can carry up to 13,000 TEUs.

Since 2010, FECR's vision to carry goods transiting through the expanded Panama Canal has been a key initiative for the railroad and its port partners, which include PortMiami and Port Everglades in Ft. Lauderdale. The railroad says it has made significant improvements to its infrastructure, enhancing intermodal service for both importers and exporters.

"When the doors on the locks open, we are ready for business," he adds.

PortMiami officials echo his comments: "We are positioned to capture new trade opportunities once the canal expansion is complete."

Port Everglades already handles post-Panamax ships, which are too large to fit through the Panama Canal today, but the ships must be lightly loaded. "This is inefficient and will drive business elsewhere," notes Ellen Kennedy, a Port Everglades spokesperson.

To better prepare for the Panama Canal expansion, Port Everglades partnered with the U.S. Army Corps of Engineers to begin an 18-year effort to deepen and widen its navigational channels and turning basin. The project's objectives are to deepen the main navigational channel from 42 feet to 50 feet, and to widen the entrance channel and maneuverability-constrained Southport Access Channel. The port planned to begin the design for the project in 2015; the construction will be complete in 2022.

Asian Trade on the Rise

Asian trade at PortMiami is already on the rise, with multiple weekly services from Miami to Asia through three of the world's major carrier alliances including 2M, O3, and G6. "Once the canal expansion opens, we anticipate additional growth in Asian trade," a port spokesperson says.

FECR expects a steady increase in the number of ocean carriers choosing South Florida as the gateway to the United States once the canal expansion is completed. The railroad anticipates increased intermodal volume for both import and export business, particularly from China to South Florida, as South Florida ports are ready to handle larger vessels that will be able to traverse the canal.

"In Florida, there are currently four southbound intermodal moves for every one coming north," says Hertwig. "That means when ships dock in Miami or Ft. Lauderdale, they receive 'backhaul' rates because of the imbalance.

"With the anticipated increase in freight moving through South Florida upon completion of the expansion, FECR expects the system to begin to balance as a result, offering shippers, carriers, third parties, and ultimately end customers better economies of scale," he adds.

PortMiami, Port Everglades, and the Port of Savannah all experienced volume growth in 2015, and officials representing the ports are confident their respective facilities are prepared for even greater volumes after the canal expansion is complete.

In 2015, PortMiami posted a 15-percent increase in containerized cargo movements with a total of 1,007,800 TEUs. Investments in on-dock intermodal rail and a tunnel to provide access to highways are providing shippers with fast service, port officials note.

The Port of Savannah experienced 17-percent growth in container unit volumes in 2015. The port was able to handle the cargo influx without congestion due to several facets of the operation, which is designed to provide efficient and flexible service, according to the GPA.

The fact that it is an owner-operator and does not lease out terminal space to different shipping lines already provides time savings, according to the GPA. With nearly 10,000 feet of contiguous berth space at Garden City Terminal, arriving vessels may be handled on a first-come, first-served basis, rather than having to wait for limited space at a leased facility. GPA currently operates 22 ship-to-shore cranes and 136 rubber-tired gantry cranes.

At 1,200 acres, Garden City Terminal has the capacity to handle influxes of cargo from super post-Panamax vessels carrying freight for multiple, allied shipping lines. Also, as a single terminal, container handling equipment can be concentrated in the areas of need—an advantage not offered by separate, leased facilities. Truck drivers have only one check-in process when delivering and picking up boxes for separate shipping lines. Turn times average 33 minutes for a one-box run and 53 minutes for a two-box run. Truck chassis are in one location, simplifying the process for truckers.

Savannah's pre-registration and tracking software further enhances efficiency by speeding truck interactions at the gates, and informing crane operators when a specific truck has arrived to deliver or receive a load.

Another part of being an owner-operator is the increased incentive to maintain and invest in terminal infrastructure. The GPA makes continual investments to keep capacity roughly 20 percent above demand, helping to avoid congestion. Garden City Terminal's location west of Savannah and direct links to Interstates 95 and 16, only six miles from the port, mean truck drivers do not have to deal with city traffic.

Savannah is a hub for distribution centers operated by major retail outlets. The DCs are within minutes of the terminal, which reduces drive time and increases supply chain efficiency. At 38 weekly vessel calls, Savannah provides a wide range of global connections. "This means more choices to more destinations, with greater scheduling flexibility," says a GPA spokesperson.

Many view the Panama Canal expansion as a tremendous opportunity. "The biggest challenge is having the infrastructure in place to handle big ships, and we are ready," say PortMiami officials. The Port of Savannah echoes those words.

Establishing an alternative shipping gateway to traditional routes upon the completion of the Panama Canal expansion is beneficial to southeastern U.S.-based companies that are demanding new supply chain options to traditional routes that have been hampered by infrastructure limitations, labor strife, and port and road congestion, resulting in delays and frustration, says FECR.

"Nobody wins when supply chains are interrupted," says Hertwig. "The problems that have been experienced and the breakdowns that have occurred are far more costly than the consumer on the street realizes, but insiders get it.

"In the long term, the hope is that this global effort to address these issues will ultimately result in enhancements in supply chains across the country," he adds. "The goal is a safe, secure, and fluid supply chain."