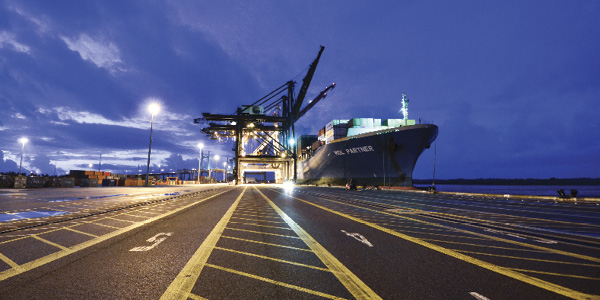 Over the past few years, steamship lines have been juggling assets and throttling back transit times to better balance supply and demand. A slowdown in global trade—especially between Asia and Europe—and the industry's well-publicized struggles with overcapacity have forced the issue for many carriers. While shippers and supply chains have adjusted to new alliances and slow steaming, reliability is non-negotiable. But a new report from Drewry Supply Chain Advisors suggests service is beginning to slide.

Container service reliability across the three main East-West trades declined in July 2015, falling by four percentage points, according to Drewry's Carrier Performance Insight online schedule reliability tool. This was the first dip after six consecutive months of improvement. The latest overall monthly performance is a result of lower reliability scores in the Asia-Europe and Transpacific trades, although service punctuality for the lesser Transatlantic route reached a new high-water mark. Despite the July dip, reliability remains well above the level it was at the same point in 2014, when the East-West trades' on-time average ratio was only 59 percent.

In terms of carrier reliability, MOL leads with 80.1 percent on-time performance, pushing Maersk Line (79.8 percent) to second. At the other end of the spectrum, Wan Hai Lines (57 percent) and Pacific International Lines (56.6 percent) are the least dependable carriers, according to July 2015 data.

Moving forward, Drewry expects reliability in the Asia-Europe trade to improve as a consequence of the expanded Suez Canal, which will reduce transit time from 18 to 11 hours, and waiting times to no more than three hours.

"The Suez turning into a two-lane maritime highway, from what could have been described as a congested, single country lane, will not only improve capacity, but will also speed transit times and reduce delays," explains Simon Heaney, senior manager of supply chain research at Drewry. "This can only be good for operational efficiency."

Trade from China, Southeast Asia to North America and Europe Will Soar

Trade from China and Southeast Asia to North America and Europe is expected to boom during the next five years, according to a new study released by business analyst company IHS Inc.

China's trade will continue to increase by more than five percent annually between 2015 and 2020, according to the World Trade Service of IHS Maritime & Trade forecasts. This positive medium-term trade growth comes despite recent setbacks caused by China's marked economic slowdown and weaker growth among other emerging markets in the current and near-term.

"These increases will not be the double-digit rises seen before the 2008 global economic crisis," says Krispen Atkinson, principal analyst at IHS Maritime & Trade. "However, an increase of more than 30 percent in the next five years underscores China's intent to remain a new trade hub-and-spoke linchpin for the rest of the economic world, cementing the Maritime Silk Road Initiative via China and Asia within the emerging market universe."

One new trend is the move toward larger containerships to streamline the supply chain. The four alliances that dominate east-west trade are pushing the trend toward containerships capable of carrying 20,000 boxes (20 foot equivalent units) in their quest to reduce unit costs with ever more efficient vessels. Current containerships hold around 13,000 boxes, so the new super-containers are capable of transporting about 50 percent more cargo. Their push has made further capacity available in the trade.

"China may be the major powerhouse in the region, but Southeast Asia is making significant headway," Atkinson says.

Trade between these two regions is made up of manufactured goods, such as home appliances and mechanical hardware. "Vietnam, India, and many South Asian economies stand to benefit from recent energy and commodity price falls as net importers of these goods," notes Jan Randolph, director of sovereign risk analysis at IHS. "They have significant industries and service sectors of their own that benefit from cheaper inputs. They also have currencies that are not coupled to a strengthening U.S. dollar."

IHS expects trade routes from China to Africa will see a marked increase over the next five years, with the highest growth expected from the East Africa-to-China route, incorporating Malawi, Mozambique, Zambia, and Zimbabwe.

"Trade between East Africa and China is expected to increase by 91 percent by 2020, centered around manufactured goods," Atkinson says. "East Africa is becoming a new hub for the Chinese."

Chinese leadership has publicly announced its commitment to develop infrastructure, and to promote regional integration in East Africa. "In the coming years, China's relationship with East Africa will change," notes Natznet Tesfay, head of Sub-Saharan Africa analysis at IHS Country Risk. "Right now, the focus is on importing raw materials and exporting manufactured goods. But, Chinese investments in enhancing regional interconnectivity will enable it to take advantage of comparatively lower operational costs, and to onshore manufacturing activity in East Africa."

Few topics have elicited as much debate in the world of trade over the past few years than the Panama Canal. As the century-old construction completes its third-lock expansion late in 2015, there is plenty of conjecture about how it will impact global shipping patterns. It's a loaded question with multiple digressions. Recurring labor strife on the U.S. West Coast, the migration of Asian manufacturing westward, West Africa's looming potential, and a booming Southeast U.S. population invariably factor into the conversation.

So does El Niño. Recently the Panama Canal Authority issued an advisory that ships would have to limit draughts—possibly to 38.5 feet—because of low water conditions in Gatun and Alajuela lakes. While the canal has been a beacon of modern engineering marvel for more than 100 years, it's still beholden by Mother Nature's whim. This is the first such restriction in almost 20 years.

Rainfall over the watershed feeding the lakes, which lies east of the canal, hasdropped sharply as a result of the El Niño weather phenomenon. Similar problems occurred in 1997 and 1998.

The Panama Canal Authority has since rescinded the caution due to increased rain and water conservation measures. Vessels will continue to transit through the canal at a maximum 39.5 feet. However, the threat of further disruptions is real. Ships that are loaded and in transit prior to restrictions will have to figure out how to offload freight in order to pass through the canal.

IKEA Sees the Forest for the Trees

IKEA Group is taking a page out of Henry Ford's book with the decision to acquire 83,000 acres of forests in central and northeastern Romania. While the industrialist's ill-fated plans to establish a rubber plantation—Fordlandia—in the Amazonian rainforests of Brazil ultimately failed, the Swedish furniture producer and retailer's vertical expansion has deeper roots.

The acquisition provides a local, renewable wood source for furniture production. Romania now becomes the first country where IKEA owns the complete product lifecycle—from timber harvesting to manufacturing via its direct cooperation with Romanian suppliers to the retail business.

September means back to school for kids and parents, but U.S. retailers were prepping months ago. Most school supplies were imported in May, June, and July to get ready for the high August demand. Imports of backpacks, pencils, markers, and crayons skyrocket during the summer. 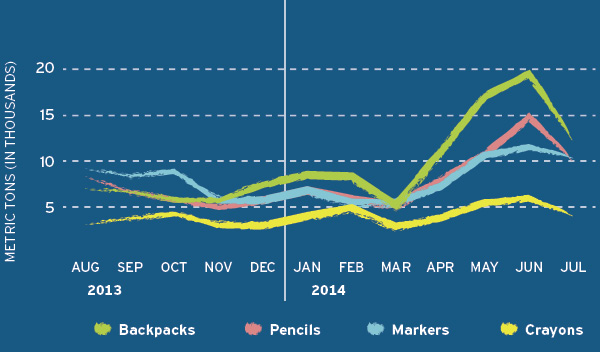 As Europe and the United States crack down on supply chain labor abuse, demand is increasing for visibility solutions that hold businesses accountable for where they source product.

To help address these concerns, London-based Marine Stewardship Council (MSC), a sustainable seafood certification organization, is piloting a traceability tool that will enable shippers to prevent fraud within the supply chain. To date, there is no online system available that can securely handle and verify information on seafood transactions on a global scale. The MSC Online Transaction Solution verifies seafood sales and purchases made by processing, distribution, and retail companies as they move through a complex global supply chain. It gathers information such as volume, species, invoice number, and transaction date to mitigate the risk of non-sustainable products being labeled and sold as certified.

If the pilot proves successful, MSC aims to implement the traceability tool across its full program by 2018.