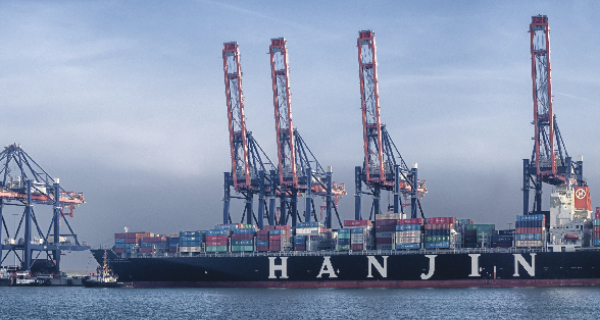 Right in the middle of the peak ocean shipping season leading up to the U.S. holiday rush, South Korean ocean liner Hanjin Shipping filed for bankruptcy protection in one dozen countries in late August and early September 2016. Hanjin is the world's seventh-largest ocean carrier, and handles nearly 8 percent of the trans-Pacific trade volume for the U.S. market.

A number of factors led to Hanjin's current predicament, including the 2009 global financial crisis, China's slowing economy, and five straight years operating at a loss that left the company with more than $5 billion in debt.

Eighty ships carrying more than $14 billion in various cargoes were left stranded at sea, potentially ruining Christmas for a large number of global retailers. In addition, the carrier stranded more than 1,200 workers on ships at sea or in foreign ports.

Around the globe, Hanjin ships were refused entry to ports, and owners or governments forcibly seized a number of leased ships. At U.S. ports, undelivered containers occupy so many trailers that a chassis shortage threatens the industry.

Hanjin recognizes the damage it has caused, but claims it is not the only one guilty of wrongdoing. "Hanjin is not the only bad guy here," said an attorney for the shipping company at a U.S. Bankruptcy Court hearing in Newark, N.J. The company claims that cargo owners withheld as much as $80 million in payments for shipments that were completed, while many of those owners claim that what they've been forced to spend to recover their cargo exceeds what they owe to Hanjin, thus cancelling the debt.

A number of cargo owners who couldn't afford to wait for the situation to straighten itself out have been forced to cover the cost of rail and truck transport for their cargo, even if they had already paid Hanjin in advance for those same services.

Meanwhile, logistics providers such as Averitt Express sprung up with rescue services to save stranded cargo. "This has been a difficult situation for all who are impacted," says Charlie McGee, Averitt's vice president of international solutions. "We are working to help shippers retrieve their stranded cargo so that they can get their businesses back on the right track. This is a particularly volatile time of the year for businesses and the situation with Hanjin has been devastating for so many. It's our industry's responsibility to help alleviate the pressure that has been created."

For those who can't afford additional costs to retrieve their shipments, an end may still be in sight. Korean Air Lines, Hanjin's largest shareholder, lent the carrier $54 million to get cargo off ships and docks, and into the hands of owners. The state-owned Korea Development Bank lent the carrier an additional $45 million.

"We've calculated the costs that will be needed to offload the cargo, and this can be covered roughly with the funds that have been pledged," said Choi Sang-mok, vice finance minister for the South Korean government, in a press statement.

Hanjin expects all cargo to be offloaded by the end of October 2016. Even if it meets that deadline, the impact of so many late shipments on holiday season sales remains to be seen.

Sorry About That, Chief

Ocean carrier struggles, the U.S. West Coast port strike, the Tianjin explosions in China, and a series of earthquakes in Japan are just a few events to disrupt the supply chain in recent years.

Still, fewer than 24 percent of respondents to the State of the Global Supply Chain survey by technology provider GT Nexus say they have a chief supply chain officer on hand who would be equipped to deal with such an interruption. Thirty-two percent say they have a similar position, but not in the C-suite.

Yet, nearly half of manufacturers report a disruption that impacted business within the past 12 months, suggesting that adding expertise in the boardroom should be a priority for all companies. Bringing someone on board who knows how to build and oversee an end-to-end partner network might help companies face the following challenges in the years to come:

Supply chain management is critical to a company's success, but less than 24% of survey respondents have a Chief Supply Chain Officer in place.

While the world's seventh-largest ocean carrier sinks underwater, its largest shipping line is splitting in half. As low oil prices continue to negatively impact the company's oil-dependent businesses, and low freight volumes similarly affect the transport side, Maersk has decided to reorganize its transportation and logistics operations away from its energy-related operations so that each can focus on its own differing and specific needs.

"Separating our transport and logistics businesses and our oil and oil-related businesses into two independent divisions will enable both to focus on their respective markets," said Michael Pram Rasmussen, chairman of the company's board, in a public statement. "This will increase the strategic flexibility by enhancing synergies between businesses in Transport & Logistics, while ensuring the agility to pursue individual strategic solutions for the oil and oil-related businesses."

The new Transport & Logistics division will consist of Maersk Line, APM Terminals, Damco, Svitzer, and Maersk Container Industry. While each of these sections will maintain their separate branding, management and operations will now take a more integrated approach.