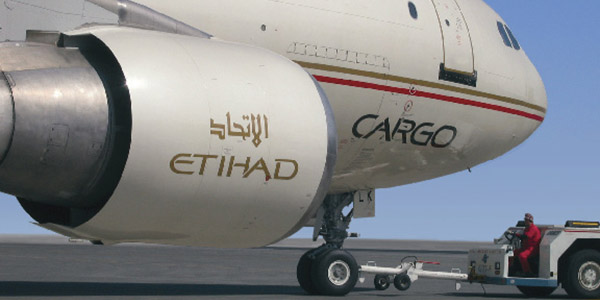 As Etihad and other Middle East airlines invest heavily in new aircraft and airport infrastructure, development needs to grow as well.

It wasn't long ago that media and markets alike were ready to anoint the Middle East as the world's next airfreight hub. Gulf carriers and airports, once the exclusive backdrop for oil business, have experienced their own boom over the past several years thanks to continued investment in assets and infrastructure, and industry differentiation. Dubai World Central, "the world's first purpose-built aerotropolis," is symbolic of the Middle East's ascent. Dubai, Doha, and Abu Dhabi all feature among the world's top 30 airports in cargo tonnage.

By contrast, established European hubs have encountered inertia, underscored by recession and sluggish economic recovery, as well as regulatory constraints including night flight restrictions, labor laws, and environmental mandates. Middle East airports are ideally positioned along the Asia-Europe trade routes, with few constraints to growth. Night flights, cheaper fuel, and preferential landing and parking fees have quickly eroded total landed costs and long-held affinities for European hubs. This consensus has been building for some time.

But Middle East interests are faced with some sobering news. Hyper investment and growth is creating congestion in Persian Gulf airspace. Long-term success is dependent on alleviating this looming concern, according to a recent Wall Street Journal (WSJ) article. No less important, as war in Iraq smolders, and tensions in Israel and elsewhere remain unsettled, airspace security is similarly compromised.

In 2013, the United Arab Emirates commissioned Airbus to study the problem, according to the WSJ. The French airplane manufacturer reported that within two years the region's major airlines would regularly see delays if countries and airlines did not work toward a regional solution.

The ramifications for high-value, time-sensitive air freight are considerable. And while European airports may be constrained by capacity, quality and service remain intact. For shippers paying a premium on transportation, timeliness is paramount.

Airbus made several recommendations in its report, according to the WSJ. Introducing air traffic flow management technology to manage lead times between flights, as well as regional Gulf air-traffic management governance, similar to Europe's Eurocontrol, are top priorities.

Part of the problem is the control Gulf governments have over airports and airlines, which creates inherent bureaucratic obstacles when trying to find areas for collaboration and compromise. Equally important, as airlines such as Emirates, Etihad, and Qatar Airways make huge investments in new aircraft, airport infrastructure development needs to keep pace.

In the 10 years since it established the GDSN, Brussels, Belgium-based GS1 has expanded from a handful of companies sharing data on 74,000 items across 13 countries to more than 25,000 companies and 15 million items in 150 countries.

As data saturates the supply chain, companies have even more incentive to find synergies. Demand is growing in verticals such as retail, food service, and healthcare. For example, GS1 has seen an uptick in medical devices joining the registry, which parallels a recent push by the U.S. Food and Drug Administration to create a Unique Device Identification rule.

GS1 expects regulatory pressures and consumer demand will drive even greater need for data that specifies how a product is delivered to market, including handling instructions, traceability attributes, nutrition information, compliance, and classification.

The United States imported nearly $190 million worth of fake Christmas trees in 2013, and that number could grow even higher in 2014. U.S. imports of artificial trees were almost $30 million more in August 2014 than in August 2013. If this trend continues into the holiday season, Americans could be putting presents under more plastic Christmas trees than ever before.

What's All the Hubbub in Puerto Rico?

As the Panama Canal's 2016 grand re-opening nears, Caribbean chatter is picking up. Jamaica made waves in 2013 with talk about developing a new logistics hub to take advantage of growing transshipment activity in the region. China is investing in upgrades to Cuba's ports. Panama has a stake in continuing to grow its Atlantic Ocean Port of Colon, already one of Latin America's busiest container facilities.

Now another Caribbean competitor is making a play. Puerto Rican officials are seeking a port operator to develop the under-construction Port of the Americas, located in Ponce, on the island's southern coast. The proposed site sits on more than 300 acres, five miles from Mercedita Airport.

"The development of this port is another step in our larger economic plan focused on long-term strategic growth," says Alberto Bacó-Bagué, secretary of Puerto Rico's Department of Economic Development and Commerce. "Infrastructure investments create valuable jobs and are pivotal to our sustained success."

The port is strategically located along the Mona Passage—a key shipping route between the Atlantic Ocean and the Panama Canal—and is equipped to serve Panamax and Post-Panamax vessels. Puerto Rico's government has invested $285 million in port upgrades over the past few years.

The country is striving to develop infrastructure beyond the docks—improving the island's power production capabilities and expanding island-wide broadband Internet service—to make Puerto Rico an attractive place to do business.

In a move that echoes California's 2012 Business Supply Chain Transparency on Trafficking and Slavery Act, a new bill circulating the UK Parliament would require large companies in Britain to declare actions they are taking to protect their supply chains from human trafficking.

The Modern Slavery Bill is in response to a Salvation Army report stating that, for the first time in Britain, the number of cases of human trafficking for forced labor has surpassed the number involving sexual exploitation. The UK government is seeking counsel to discern what businesses will be affected by the new disclosure rules, and produce statutory guidelines to help firms comply. It expects Parliament will pass the bill, which consolidates slavery and trafficking offenses in one wide-ranging law, before the next general election in 2015.

By comparison, California's supply chain transparency legislation applies only to retailers and manufacturers doing business in California. Under its provisions, all companies with global revenue surpassing $100 million that are required to file annual reports with the Securities and Exchange Commission have to similarly disclose what measures they are taking to identify and address human rights abuses.

In June 2014, a complementary bill—the Federal Business Supply Chain Transparency on Trafficking and Slavery Bill (H.R. 4842)—was introduced into the U.S. Congress. The bill would present a "market-based solution" to curbing human trafficking at a national level.

North and South Korea Go for the Coal

Trade might be a key enabler to unlocking better relations between North and South Korea. The Republic's leading steelmaker, POSCO, is exploring the possibility of importing Russian coal through its northern neighbor's port in Rajin.

As part of a pilot project, Hyundai Merchant Marine will charter a bulk carrier to transport 35,000 tons of coal from Rajin, on the Russian border, 420 miles south to Pohang, South Korea. The steel manufacturer, which annually imports two million tons of coal from Russia, is using the move to consider the viability of routing shipments through North Korea.

The agreement is part of a broader Rajin-Khasan logistics project, which aims to link the North Korean port city to Russia's Trans-Siberian railway. Russia has invited South Korean rail operator KORAIL, POSCO, and Hyundai Merchant Marine to join the project as indirect investors.

North Korea and Russia recently reopened a 34-mile stretch of railroad track linking the Russian city of Khasan to the port after a five-year renovation. A new dock at Rajin is capable of handling four million tons of coal annually.

South Korea's gambit is part of President Park Guen-hye's "Eurasian Initiative," a vision that calls for building more infrastructure and opening up trade between Eurasian nations. The long-term objective is to create a single market that mirrors the European Union.