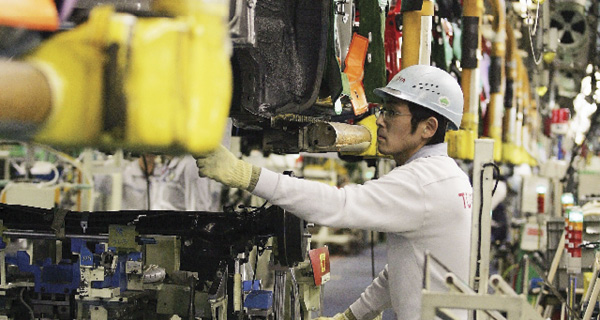 With property and local infrastructure severely damaged, many companies will continue to feel the effects in the coming months. Kyushu is a major manufacturing hub, so the companies below are only a few among dozens more—primarily automotive and electronics manufacturers and suppliers—that have experienced shutdowns, delays, and interruptions as a result of the earthquakes.

Toyota Motor Corp. Toyota's supply chain is often viewed as something to aspire to, but its tight schedules leave little room for interruption. Due to supplier shutdowns caused by the earthquakes, Toyota was forced to temporarily close 26 assembly plants across Japan. Morgan Stanley estimates the closures will cost Toyota about $277 million.

Honda Motor Co. Honda was forced to shut its motorbike plant in Kumamoto for a few days, but most of its plants in southern Japan stayed open despite the crisis.

General Motors Co. The U.S. automaker shut down four plants in the United States for two weeks while it assessed the effects of the earthquake on its supply chain. "This temporary adjustment is not expected to have any material impact on GM's full-year North America production plans or results," the company said in a statement.

Sony Corp. Sony temporarily closed its Kumamoto and Nagasaki plants, which manufacture image sensors for smartphones, including Apple's iPhone. "We are not expecting any immediate supply disruption as we have some inventories right now," a Sony spokesman told Reuters.

Add climate change to the factors that shape global trade. A permanent change in the weather can redirect trade flows, raise the price of goods, and create openings for new products. Research from Datamyne shows six current cases of climate change impacts on trade:

Africa has often been referred to as one of the last frontiers for economic growth and development. Given the recent economic downturn and headwinds that the continent is experiencing, however, does the region still offer opportunity for investors?

One company—DHL Express—firmly believes that the African continent will continue to grow as it has over the past decade due to the vast number of unexploited opportunities available for local and foreign investors.

"The drop in GDP growth for the region over the past year shouldn't deter investors," says Hennie Heymans, managing director of DHL Express Sub-Saharan Africa. "Africa will continue to thrive, albeit at a slightly slower pace than previously experienced."

Economically, 2015 was a tough year for Africa. A drop in demand for the continent's commodities, in addition to falling prices, declining currencies, political instability and widespread drought caused by El Niño have all contributed to the region's challenges. Despite this, "the region abounds with untapped prospects and offers growth opportunities in 2016 for those willing to seek them out," says Heymans.

The latest World Bank Africa's Pulse, an analysis of economic trends and data, supports Heymans' claim. "The good news is that domestic demand generated by consumption, investment, and government spending will nudge economic growth upwards to 4.4 percent in 2016, and to 4.8 percent in 2017," says Punam Chuhan-Pole, author of the report and acting chief economist for the World Bank Africa Region.

Some regions have higher growth prospects than others, according to the World Bank report. Cote d'Ivoire, Ethiopia, Mozambique, Rwanda, and Tanzania are expected to sustain growth of approximately 7 percent per year in 2015-2017, thanks to large-scale investments in resources, energy and transport projects, and consumer spending.

More countries in the region could be thriving if not for underdeveloped infrastructure and bureaucracy. Heymans points to the mining sector in Madagascar as one example. "This could be a potentially lucrative opportunity for investors due to the country's coal, nickel, and ilmenite resources," he says. "However, several legislative reforms are still needed.

"The opportunities are clearly there; it's all about having a long-term, sustainable focus on the region," Heymans says. "As we move into the second quarter of 2016, DHL Express will continue to invest in the Sub-Saharan Africa region, with the ultimate goal of seeing the continent thrive."

Intra-Asia trade will increasingly benefit from the rapidly growing consumption in Asia, as more cargo is shipped to end markets in the region instead of to destinations in other parts of the world, according to the latest IHS Global Insight report. In addition, rising consumption trends in Asia Pacific will benefit intra-Asian trade, and e-commerce shipping and logistics.

Among the report's key points: