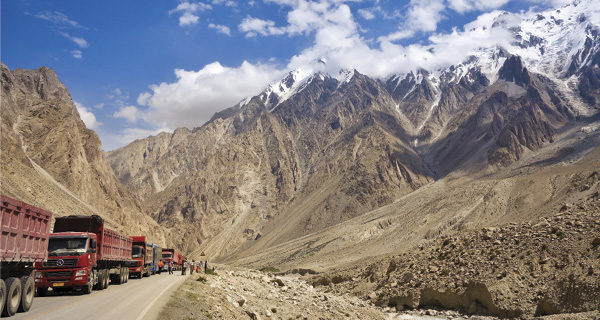 China is funding a construction project to renovate a stretch of the Karakoram Highway, which is currently the only overland connection between China and Pakistan.

China's "global diplomacy" holds few bounds. From Central and South America to Africa, the country has been aggressively asserting its influence and injecting capital into new infrastructure developments that also pave the way for further commodity sourcing.

But China's impact in Asia is far greater, especially as it relates to intra-regional trade development. The country's most recent quarry is Pakistan, where Chinese President Xi Jinping recently paid a visit.

Pakistan is seeking Chinese investment (upwards of $46 billion) to help fund needed infrastructure projects—notably the Karakoram Highway connection to the southern port of Gwadar and a cross-border rail route between the two countries. Like others before, Pakistan believes Chinese money, clout, labor, and reputation for getting things done quickly will help spur and expedite development.

The outlay China is willing to invest in Pakistan is more than twice the amount of all foreign direct investment the country has received since 2008, according to BBC reporting. Such an immediate infusion of capital has Pakistan officials bullish on making the partnership work.

Opening up a southwestern trade corridor similarly benefits China. As manufacturing moves westward, Pakistani ports provide a more efficient and economic means to move product. China is also looking to forge a new Silk Road that extends to the Middle East and Europe.

Pakistan is the world's sixth-largest country in terms of population. China may similarly see Pakistan's tenuous and contentious relationship with India as an opportunity to make new inroads as competition between the two global juggernauts stiffens. Pakistan, for its part, will also benefit politically by having a closer ally in China.

Still, the development plan is not without considerable roadblocks. Provincial politics in Pakistan, and the threat of separatist insurgency, have cast shade on the proposal. The Gwadar port is located in Balochistan, which is Pakistan's poorest and most volatile province. Government is already steering corridor routing away from the area, which has only fueled criticism from Balochistan officials who argue the more affluent Punjab Province will invariably receive special privilege.

Indonesian Logistics: What's It All About, ALFI?

Transportation in Indonesia is a foremost challenge for shippers, given its unique geography as an archipelago comprising 18,000 islands. Keeping logistics costs in check has been a recurring problem that has beset Southeast Asia's second-largest economy. Poor infrastructure and overreaching regulations have further conflated costs of doing business.

While the country appeared to be making progress under the leadership of new President Joko Widodo—"A New Hope" as branded by Time magazine—optimism is beginning to wane. The commodity-driven economy has taken a big hit because of global oil price volatility.

To make matters worse, a new government regulation has raised the minimum capital for logistics companies to operate from US$15,000 to nearly $2 million, much to the consternation of local logistics service providers. Consequently, the Indonesian Logistics and Forwarders Association (ALFI) plans to file a lawsuit.

"We previously proposed to the transportation ministry an increase in minimum total assets from $15,000 to approximately $100,000," says ALFI chairman Yukki Nugrahawan Hanafi. "We don't understand the reason why the minister later decided to increase the capital requirement to $2 million."

Because of its transportation constraints, and the costs therein, Indonesian economic development is highly dependent on the growth of its emerging logistics industry. ALFI contends such regulation would shut down many of the small and mid-sized forwarders and service providers that operate across the country, contributing to thousands of lost jobs. It estimates that the transportation and logistics industry in Indonesia employs about 534,000 people. Moreover, such a draconian capital requirement would disrupt the flow of cargo moving through the country, while increasing costs.

The government is committed to moving forward with the new regulation—a policy change that it believes will raise the quality and reliability of the country's logistics sector. Companies will be given three years to comply. The regulation is currently with the Law and Human Rights Ministry for further assessment.

Even with such a grace period for compliance, ALFI argues that most companies won't be able to meet that requirement. Instead it has suggested that the government should classify logistics companies by size rather than applying one set of regulations across the entire industry.

The United States and Japan are still at loggerheads over automobile and agriculture export terms, which is delaying progress toward reaching a landmark Trans Pacific Partnership (TPP). But both sides indicate a deal is within reach, according to a recent Associated Press report.

The talks between Japan and the United States are part of negotiations among 12 nations participating in the U.S.-led Trans Pacific Partnership. The goal of the partnership is to create a free trade zone in the Asia-Pacific region.

A hangup over increased exports of U.S. rice to Japan, and Japanese automobiles and auto parts to the United States, appears to be nearing a resolution, although negotiations continue.

The group's first priority is to promote supplier assessments, which will be conducted by EcoVadis, a Paris, France-based supply chain sustainability integrator. Partners will be required to submit one common questionnaire, and will have full control over who can see their information and assessment results. They can opt to share this information with any of the Railsponsible members who are their customers.

An uptick in ocean trade suggests that the global economy is showing positive and sustainable signs of recovery. But an enduring capacity imbalance still threatens steamship line profitability.

Demand for container shipping is expected to grow upwards of five percent in 2015, even as freight rates continue to decline due to a surplus of capacity, according to Lars Mikael Jensen, chief executive of Maersk Line's Asia Pacific region. As ships ordered several years ago are just now coming online, supply growth is anticipated at five to seven percent.

The average revenue per TEU is dropping as rates vary in different trades, which is attributed to supply-demand imbalance. This places additional pressure on shipping lines to reduce costs on a per-box basis.

"We are working in a scenario where there won't be a massive upward return of the average revenue per box, so cost savings and efficiencies are important," says Jensen.

The recent financial results of most steamship lines suggest revenues and profit margins are under pressure, he adds, especially those generated from the east-west trades.