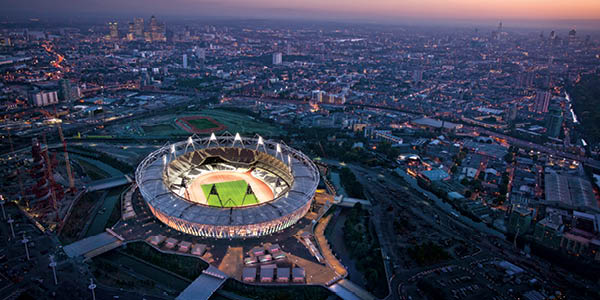 London's Olympic Park is one of 28 venues to host 302 Olympic events. Industry lobbies are working to ensure freight continues to move into and out of the city during the Games.

For global TV viewers, the 2012 Summer Olympic Games in London will be a two-week parade of sports pomp and pageantry. But behind the scenes, a grittier story will unfold—how the rest of London gets on with life during a busy fortnight.

The Freight Transport Association (FTA), a United Kingdom trade lobby, has been public advocate number one, working on behalf of the commercial sector to help identify ways to keep freight moving during the Olympics.

"It is vital that commercial vehicle operators intending to deliver into London and other destinations over the next few months understand the restrictions and disruption the Olympics will cause, and plan around them," says Natalie Chapman, head of policy, Freight Transport Association, London.

The FTA is still awaiting final details on restrictions, but has counseled businesses to begin contingency plans for managing deliveries and supply chains around road closures, loading and unloading restrictions, and other route changes. The trade association also published a comprehensive guide with maps, diagrams, and details of expected restrictions that will be in force across London venues, as well as advice on how shippers can coordinate deliveries around night-time curfews.

"London's roads are the most heavily regulated in the country, with the London Lorry Control Scheme limiting routes at night and during weekends, and the Low Emission Zone dictating the age of vehicles that can operate in Greater London," says Chapman. "Add the Congestion Charge Zone and all the normal parking and loading restrictions, and London will be a delivery minefield ready to trigger fines, penalty charge notices, and license revocation for the unwary and unprepared."

To counter some of these challenges, the FTA has been campaigning for authorities to relax both delivery curfews and London's truck-toll scheme so that shippers and carriers can take advantage of off-peak hours.

In the meantime, Olympic organizers, the British government, emergency services, health providers, and transport carriers recently staged a three-day test period to mimic conditions during the Games' busiest slate, when 26 sports will take place across 14 venues. Authorities initiated possible incidents to see how different parties would react, and tested procedures put in place to deal with problems.

Following management restructuring earlier in 2012, German retail chain METRO GROUP is realigning its logistics operations to more quickly respond to economic changes in the 30 countries where it operates. The company is consolidating its cross-divisional logistics activities under one management structure—METRO LOGISTICS—which will handle logistics services for sales divisions in Germany, as well as overarching international operations.

The company plans to simplify supply chain management with this organizational realignment, and improve logistics service for sales divisions within its Metro Cash & Carry and Real stores. METRO LOGISTICS will comprise two operational units: one managing warehouse, distribution, and procurement within Germany and neighboring countries; the other handling international logistics.

"With the organizational restructuring, we will achieve enhanced operational processes and more efficient cost structures. This allows us to directly support the business of the sales divisions," explains Jeroen Janssen Lok, the new CEO of METRO LOGISTICS. "We are also aligning ourselves more with strategic activities, such as delivery and e-commerce, that are heavily dependent on optimal supply chain management."

Tougher rules for automakers could pose supply problems in Brazil, especially for those building or planning to build their first factories in the country, according to a recent Dow Jones report. In 2011, Brazil raised taxes on cars made with less than 65 percent locally sourced content to curtail vehicle imports and strengthen the domestic auto industry. Authorities are expected to maintain these tariffs until 2016.

Many established automakers already produce a significant ratio of their parts locally, and indicate they will be able to meet the new local content requirements—even with the standardizing of some features such as airbags and anti-lock braking systems—without significant bottlenecks.

But the arrival of new auto producers, especially the migration of Asian carmakers to Brazil, could shake up some supply chains.

Asian carmakers "will bring their production partners with them, but parts that don't make logistics sense to bring here, they will seek to buy in Brazil," says Renato Abel Crespo, Volkswagen's purchasing manager for the region. "Some parts of the supply chain could suffer disruption."

China Ready to Invest in Transportation

China is prepared to expedite investment in roads, railways, and utilities to boost economic growth, according to the China Securities Journal.

Increased infrastructure spending will fall within the government's framework of policy "fine-tuning," instead of another massive stimulus like the one it launched at the end of 2008.

With growing domestic consumption and export production balanced to foreign demand, the Chinese government favors continued spending on infrastructure—and improving the quality and reliability of its transportation network—over building out industrial capacity where surplus already exists.

Five of the top 10 U.S. ports show increased inbound TEUs for the first quarter of 2012. The Ports of Long Beach and Seattle are down slightly compared to last year. 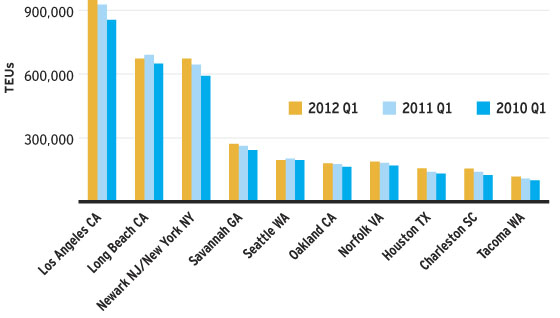