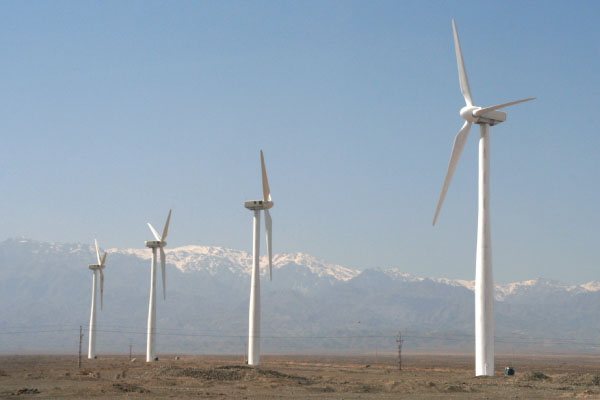 China is producing wind turbines, such as these in Xinjiang province, at a record pace.

China may be the most polluting country in the world, but it’s putting some of that smoke and carbon output to good use by manufacturing renewable energy equipment. The country is producing wind turbines and solar panels at a world-record pace, according to Who’s Winning the Clean Energy Race 2010, a new report from The Pew Charitable Trusts. China’s private investment in clean energy soared in 2010, increasing by 39 percent over 2009 to $54.4 billion.

China’s growth is a microcosm of broader global traction. The worldwide clean energy sector grew 30 percent from 2009 to $243 billion of finance and investment in technologies such as wind, solar, biofuel, and geothermal.

But Asia is the region to watch. In 2010, its clean energy investment increased 33 percent over 2009 to $82.8 billion. In 2009, the region surpassed the Americas for the first time, and in 2010, investment grew faster than in Europe. The European region is still the leader in clean energy finance, with $94.4 billion in investments (mostly helped along by investments in small-scale distributed capacity projects, including rooftop solar panels), but Asia is quickly catching up.

Surface transportation trade between the United States and its North American Free Trade Agreement (NAFTA) partners Canada and Mexico increased by 24.3 percent in 2010 compared to 2009, reaching $791 billion, according to the U.S. Department of Transportation’s Bureau of Transportation Statistics (BTS). The 24.3-percent increase in trade was the largest year-to-year increase for the period covered by these data.

U.S. interests in Mexico remain largely stable, despite rampant violence. Proximity to American markets and reduced transportation costs kept companies committed to Mexico during the recession. How long this grace period lasts remains to be seen. In the short term, the new cross-border agreement that will allow Mexican truckers entry into the United States will help spike trade.

North of the border, Canada’s east and west coast ports are becoming increasingly popular options for pulling freight into the U.S. Midwest via a maturing intermodal network.

Ireland’s economy has been on the skids thanks to the global recession. After a bailout from the European Union— and with tepid job growth, high unemployment, and a mass emigration of young workers— Ireland is setting its sights on transportation and logistics as a new lifeline.

For a country that has historically relied on tourism, agriculture, and niche manufacturing— and more recently banking, high-tech industries, and research and development— to drive GDP growth, Ireland’s economy is specialized. As an island with constrained and costly transportation connections to continental Europe, and limited offshore manufacturing appeal, its greatest export (and import, in terms of tourism revenue) has always been culture— often couched within the trappings of Waterford crystal, Guinness stout, and other typecast Irish commodities.

But Ireland has an educated, skilled, and English-speaking labor force, strong ties to the United States and Europe, and a pro-business tax regime. It also has transportation infrastructure that is largely under-utilized from a cargo perspective— which has some people thinking about making freight transport a national priority.

One example: The Dublin Port Company plans to double trade volume by 2040 through recovering up to 100 acres of land from Dublin Bay and dredging deeper berths to accommodate larger containerships. The plan also includes an increase in roll-on/roll-off and load-on/load-off freight and cargo activities.

Dublin Port’s 2040 roadmap follows already-developing plans to transform Shannon Airport into a global air cargo hub. Over the past 15 years, Dublin has supplanted the west-of-Ireland airport as the primary passenger port of entry.

In 2010, Lynxs Group, a global airport cargo facility company, and Shannon Airport signed an agreement to develop a major international logistics hub and business facility at Shannon Airport, which is managed by the Dublin Airport Authority (DAA). More recently, Lynxs submitted a proposal where the DAA would invest US $10 million into making the freight hub a reality in the next few years.

The planned cargo port would be built at a cost of $15 million and include a 200,000-square-foot facility with chilled and freezer storage capabilities, and heated warehouse space. Lynxs also holds the rights for the development of all on-airport cargo facilities and is currently in discussions with several major airlines and cargo-handling companies.

In the wake of the earthquake, tsunami, and eventual nuclear crisis that has devastated Japan, global shipping line APL began radiation scanning of containerized Japanese exports delivered to its marine terminal. The carrier expects to scan approximately 200 containers daily.

Damage to nuclear reactors heightened radiation levels in the vicinity of Fukushima, leading Japanese authorities to establish an 18-mile safety zone around the site. To combat the threat of nuclear contamination, carriers are taking extra precautions. APL has directed ships at sea to remain 200 nautical miles from the reactor site, and has refused bookings within the safety zone.

APL also hired a Japanese surveying firm to scan export containers passing through its Yokohama terminal. Workers use portable detection equipment to determine if boxes have been exposed to heightened radiation levels.

Radiation scanning at Yokohama won’t disrupt vessel schedules, says APL. But in the short term, it’s another layer of cost and control that typifies the new normal in Japan.