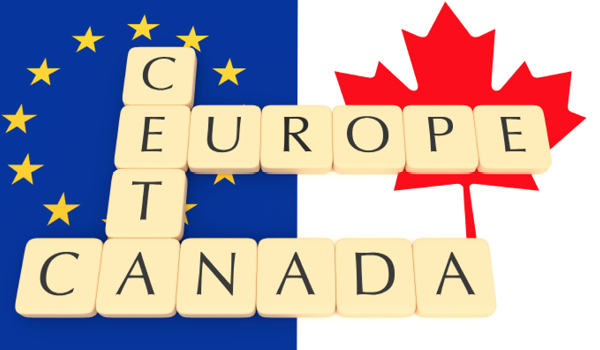 After much debate, the European Union (EU) and Canada approved the controversial Comprehensive Economic and Trade Agreement (CETA). While some parts of the deal regarding foreign direct investment still require approval from individual governments—a process that could take years—CETA will soon have tangible benefits for both entities.

One notable example is a removal of tariffs on automobiles and a 4.5-percent reduction on related parts, which has EU and Canadian car manufacturers reconsidering their target markets and supply chains.

Agricultural trade between the two bodies will also get a huge boost. Tariffs aren't the only thing changing; trade limits on certain products increase as well. For example, the amount of cheese the EU exports to Canada will double. In return, Canadian exports of agricultural items such as pork, beef, and wheat will increase in stages in years to come.

"More and smoother trade means more and better maritime transport operations, with shipping being the main vector of trade," said Patrick Verhoeven, secretary general of the European Community Shipowners' Associations, in a public statement. "The agreement importantly also ensures open market access with regard to international maritime transport services. This agreement is one of the first to conditionally open some feeder services, transportation of empty containers, and dredging services."

The deal also opens up Canada's national, provincial, and local government procurement market to EU providers, a market valued at more than $3.3 trillion annually. This decision is making waves because it is something Canada has never assented to before in a trade deal.

"If we are successful, CETA will become the blueprint for all ambitious, future trade deals," Canadian Prime Minister Justin Trudeau said in a speech before the European Parliament. "If we are not, this could very well be one of the last.

"Make no mistake about it, this is an important moment," he added.

In an uncertain global economic and political landscape, many companies are looking for clarity on the future of global relationships. Never is this more important than when it comes to international trade.

Looking ahead to 2020, the exporting powerhouses are likely to be China, Germany, the United States, France, and the Netherlands, according to the Castrol Global Trade Barometer (CGTB), which aims to provide a future look at imports and exports in the aerospace, automotive, industrial, marine, and natural products sectors around the world. Despite China's huge export lead, Castrol predicts it will grow more slowly than any of the other countries in the top 10, excluding Japan. The overall slowing of China's economy, and its shifting priority toward a domestic demand-led economy, will not damage its lead, but could narrow the gap with its nearest competitors.

When it comes to imports, however, the United States, China, Germany, France and the UK are the countries to watch. The European Union holds the most import power, with its current members likely to import about eight times as much as the United States, the CGTB suggests.

The report predicts Chinese imports will grow slowly at 1.7 percent. This is a result of a push to create more domestic-focused industries and competition from other low-income manufacturing countries, which require considerable resource imports.

The fastest growing exporters and importers, however, are largely emerging markets—currently some of the poorest countries in the world. The CGTB suggests that Niger, Afghanistan, the Central African Republic, Burkina Faso, and Vietnam, nations with an average GDP per capita of $836 in 2014 (World Bank), will become the fastest-growing global exporters.

When it comes to imports, Mozambique, Burkina Faso, Vietnam, Côte d'Ivoire, and the Congo will emerge as leaders. While these emerging markets are growing from a low base, there will be a boom in some sectors, which is likely to impact trade by 2020. African nations in particular will benefit from outside investment in the continent's agriculture sector. 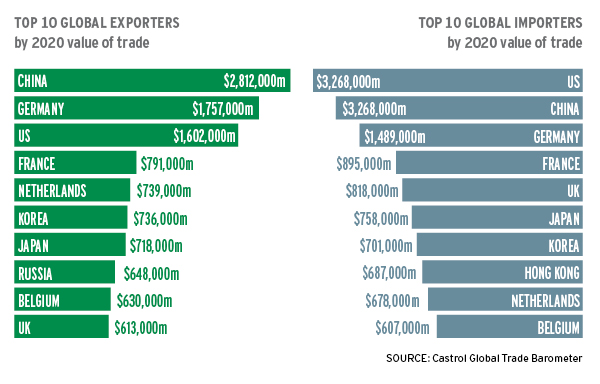 China is projected to export nearly two-thirds more than Germany or the United States in terms of total trade value. However, China will grow more slowly than the other countries among the top 10 exporters, barring Japan. When it comes to imports, it is the U.S. that will lead the world, according to Castrol's rankings. The European Union, however, is likely to continue to be the most significant destination for the world's goods, with its members forecast to import eight times more than the U.S. However, with trade pacts and priorities all currently up for discussion, this could be set to change.

CGTB projections by industry include:

Aerospace. As a key component of global trade, the aerospace industry will continue to play a key role in the movement of goods. The top performing aerospace exporters are predicted to be the United States, France, and Germany. The United States is expected to export as much as the third through 10th largest exporters, while France will export about as much as the third to eighth largest.

In the near term, the aerospace industry is likely to remain dominated by the passenger jet Boeing/Airbus duopoly. Yet, drones are forecast to be a major disruptor and there is a real chance that they could replace costly satellites during the industry's rapid expansion.

Automotive. Germany is set to retain its position as the highest-value automotive exporter by a considerable margin—currently exporting three times the value of China. China, too, will be one to watch; its exports are forecast to rise rapidly to overtake the United States. China is also likely to be one of the largest importers of cars and automobile parts, although this time sitting behind the United States.

To see future growth, China needs to crack new markets through partnerships with manufacturers in other nations, as well as continue its push to create low-cost electric vehicles for the domestic market. If "smart" cars and features such as automatic parallel parking, enhanced cruise control, connected apps, and heads-up displays become standard, nations currently leading the rankings could see their positions shift.

Industrial. As in the aerospace sector, China is expected to be the leading exporter of industrial products by a long way—nearly double that of second-place Germany. Trade in manufactured goods and commodities, however, are predicted to be flat, or even decline, for some large economies. However, there will continue to be positive trade in high-value goods, including phones and circuits, benefitting countries such as South Korea.

Propelled by the low cost of labor, Vietnam looks set to be one of the fastest-growing exporters, and a top 10 exporting nation in the years to come. As 3D printing develops, and customization takes a greater share of the value of finished products, there is a strong possibility that supply lines could shrink, with manufacturing acquiring more elements of customer-facing services.

Marine and ports. Western Europe is likely to remain a significant player within the marine industry as the demand for environmentally friendly ships increases. By 2020, the Marine Trade Barometer predicts a shift in the top exporters, with the United States and Italy both forecast to drop out of the top 10. While the barometer predicts strong growth rates from the United States, it is not enough to compete with the likes of Nigeria, Brazil, and Thailand.

South Korea's shipbuilding industry is in difficult straits, after Hanjin Shipping's collapse into bankruptcy in August 2016. However, the importance of the industry to the country means that the government has already announced plans for a state-backed financing company that will ensure the sector's survival.

In terms of ports, Asia is the one to watch. China, in particular, will continue to dominate, with seven ports in the top 10. The expanding geography of Asian supply chains will see companies continue to establish suppliers in the remaining low-cost frontiers, including Cambodia, Laos, Myanmar, the Philippines, and Vietnam.

Natural products. The Natural Products Trade Barometer forecasts rapid growth for both exports and imports in many developed countries to 2020. The United States will expand its exporting lead over the Netherlands—a nation that strongly benefits from its small population, flourishing agriculture sector, and position as a world- leading cut flowers provider. 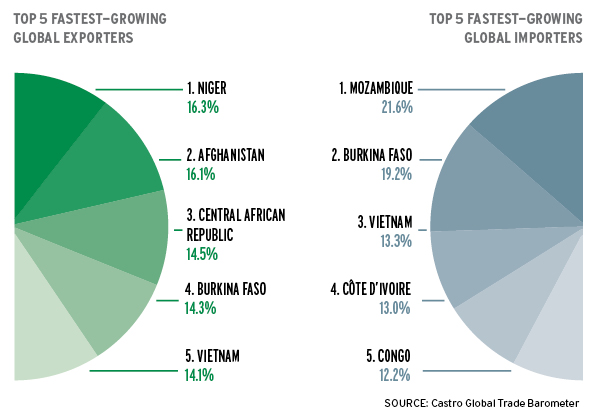 Alongside the big players, some of the world's poorest countries are growing at a rapid rate, albeit from a low base. While these fast-growing nations may currently be small in value terms, they contain some booming sectors that will benefit from continued outside investment; for example, investment in the agriculture sector in African nations.

Agricultural product trade is forecast to grow in line with the world's growing caloric demand. This will require investment in scientific advances, both in monitoring crops via satellites and drones, and in consolidating plots and modernizing practices in Africa. Climate change, too, will play a part in shaping natural resources, with predictable weather patterns and production processes facing disruption.

What are U.S. shippers' business priorities for 2017, and outlook on international trade relations? To gain insight, DHL Express surveyed more than 100,000 U.S. customers directly after the U.S. presidential election in November 2016. 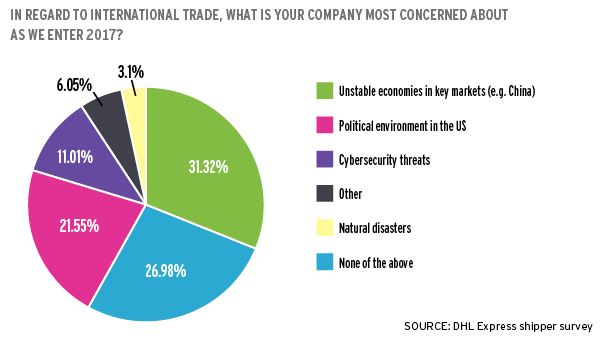