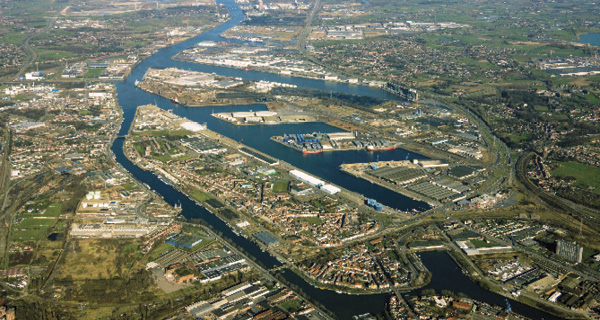 Starting in 2015, ships and companies will have to use only one port information system to report arrivals and departures at the Port of Ghent (pictured) and Zeeland Seaports.

Dutch and Belgian port authorities implemented a single cross-border port information system for vessels entering the Zeeland Seaports in Vlissingen and Terneuzen (Netherlands)—which are situated where the Ghent-Terneuzen Canal meets the North Sea— and the Port of Ghent (Belgium), located 36 miles farther inland.

Ships that sail into or depart from the Port of Ghent, or the ports in Vlissingen and Terneuzen, must report arrival and departure information electronically, which, in turn, guarantees the smooth management of ships through the canal. Both Ghent and Zeeland port authorities currently use their own systems, requiring ships arriving in both ports to submit all their data twice.

Beginning in 2015, ships will have to use only one port information system to moor and unmoor at all three ports, benefiting not only waterborne traffic, but also all the companies operating in the cross-border canal area.

Ghent's existing port information system, ENIGMA (Electronic Network for Information in the Ghent Maritime Area), will be expanded to meet the needs of the Zeeland Seaports. The technology is used for data submission, as well as communication among various port users—for example, requisitioning warehouse services, boatmen/mooring operators, and tugboats, among other supply chain parties.

Africa's rising star in the global economy is having a positive impact on domestic small and medium-sized enterprises (SMEs), and this will help drive sustainable economic growth, according to Charles Brewer, managing director, Sub-Saharan Africa, DHL Express.

The International Monetary Fund predicts economic growth on the continent will tip six percent in 2014, up slightly over last year's numbers.

"This growth, coupled with the more than one billion consumers on the continent who spend $600 billion annually, provides African SMEs with boundless opportunities in 2014," says Brewer.

"Africa's middle class has tripled over the past 30 years, and the current trajectory suggests it will grow to 1.1 billion in 2060," he adds. "As African economies are some of the fastest-growing in the world, the outlook for the continent is very positive going forward."

While manufacturing on a large scale is still maturing, Brewer sees opportunities for entrepreneurial SMEs to step up and help fill this void—in turn, creating new jobs, and spurring further infrastructure development.

The European Union will consider lifting existing tariffs on 96 percent of imported goods from the United States—retaining protection for a few sensitive products such as beef, poultry, and pork—to nudge along what would be the world's largest proposed free trade agreement. The latest concession comes as EU trade officials and their U.S. counterparts prepare for more deliberate discussions, according to a Reuters report.

Tariffs between the United States and the 28 member countries under the EU umbrella are low to begin with. But both sides see shared opportunities by eliminating what trade barriers do exist. A trade deal would encompass half the world's economic output, and feature economic gains of about $100 billion annually for both sides.

The EU's proposal is split into four categories. First, it would offer to drop 96 percent of tariffs on the understanding that Washington would reciprocate. Two transition categories would be proposed for a further three percent of goods, with periods of three and seven years to allow EU industry to adapt until tariffs are dropped. These categories might include commercial vehicles and some agricultural products.

In the final category, sensitive products would remain protected, but the United States would be granted larger quotas. 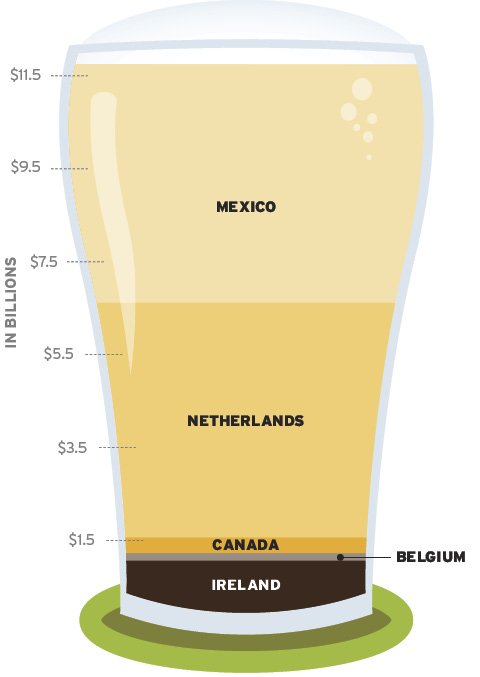 Mexico seems an unlikely candidate for the top supplier for imported brews, but the country actually provides almost half of U.S. beer imports. And here's a St. Patrick's Day surprise: Ireland accounts for only five percent of imported malt beer.

The Greek government is counting on transportation infrastructure development to help reverse its economic fortunes. In the middle of a six-year recession, and with unemployment topping 28 percent, the country's top port in Piraeus could be a valuable asset moving forward, according to Development Minister Kostis Hatzidakis.

Currently the 11th-largest container-shipping port in the European Union, Piraeus is expanding as China-based COSCO Pacific operates one of two piers and is building a third.

Greece's location at the crossroads of three continents is favorable. It's the first major European container port for ships entering the Mediterranean Sea through the Suez Canal.

To help stimulate demand for sea and rail transport near the port, Greek Prime Minister Antonis Samaras's government is preparing to sell a 67-percent stake in Piraeus Port Authority, and a 100-percent stake in rail operator TrainOSE. Privatizing state-held assets is a critical part of Greece's international bailout agreement, under which the country received billions of dollars in rescue loans from other European Union countries and the International Monetary Fund.