India's economy has been faltering amid questions about protectionist business and trade policies, socio-political imbalances, and transportation weaknesses.

But the country shows signs of progress in one industry: automotive. When Tata Motors debuted the world's cheapest car in 2008, it created a buzz. The Tata Nano was designed and built to meet the Indian market's need for affordable, no-frills transportation. But the car's success has been fleeting, and Tata has yet to find a core market—a microcosm for India's stop-and-start economic progressions.

Still, India's automotive market—as a producer and consumer—is gaining traction. Daimler subsidiary Mercedes-Benz Research and Development India recently opened a site in Bangalore, a move that demonstrates the company's objective and ambition in establishing a future presence in India. Similarly, Japanese auto maker Isuzu is building a manufacturing plant as it gears up to enter the country with commercial and sport utility vehicles. Its initial focus will be to serve the demand of the Indian market, then look at exporting vehicles to neighboring countries.

"Our partnership with APL Logistics enables us to leverage its vast international network to help OEMs and tier suppliers connect the dots between their sourcing and selling geographies," says Bill Garrett, CEO of VASCOR.

This type of bundled 3PL expertise couldn't come at a better time. "One challenge facing India's automotive sector is an inadequate domestic transport infrastructure to accommodate expected production and sales volume growth," Garrett says. "The problem is especially acute in the outbound finished vehicle segment, where 97 percent of finished vehicles are transported by truck."

That only three percent of vehicles are distributed by rail—compared to 70-plus percent in the United States and 60-plus percent in Europe—is telling. Beyond that, India's road system is notoriously poor and congested, leading to lengthy transit times, a higher occurrence of damage, and increased costs.

"Creating more capacity via rail is a natural progression from the current state, and will change the model for the entire industry," Garrett notes. "The challenge for OEMs is to gain confidence in the new intermodal network."

India faces challenges similar to other emerging markets with immature infrastructure and a rising middle class that demands better transportation. Like China and Brazil, India has a huge land mass and population density that creates congestion around major metropolitan areas. Developing India's domestic transport infrastructure is key to enabling continued growth in its auto sector, says Garrett. Progress has been hampered, however, by the slow pace of government policies needed to affect the required infrastructure improvements. As a consequence, there is a significant execution gap.

The presence of APL Logistics VASCOR Automotive will help manufacturers address some complexities of managing a global supply chain. The joint venture can provide an end-to-end solution for OEMs, with a single point of contact for the entire finished vehicle supply chain—as opposed to working with multiple providers or carriers. Absent homegrown resources and direction of its own, India is reliant on global logistics service providers to enter the market and bring best practices that can be applied locally.

As India's automotive market develops, Garrett sees an increased focus on various supply chain components that historically may not have been viewed as value-added. For example, in the finished vehicle supply chain, manufacturers are paying greater attention to yard management and vehicle inspections. Volumes are growing steadily, creating the need for more sophisticated management techniques in the yard, as well as other parts of the supply chain.

Despite existing problems, Garrett holds great expectations for India's automotive market. "India has the potential to be one of the largest automobile producing countries—certainly in the region, and could even rival the U.S. and Chinese markets longer term," he says. "India will produce significant volumes of new vehicles, both for local consumption and export. We plan to be an enabler for this growth."

China leads as the top supplier of products to the United States, while import shipments from Germany and Vietnam jumped significantly. 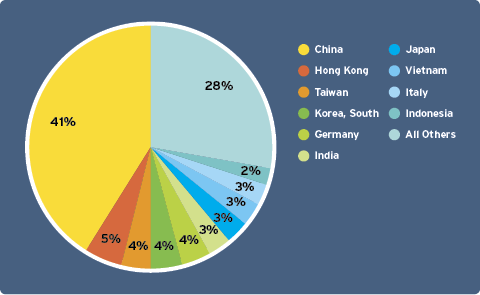 Canada could experience a shortage of 25,000 to 33,000 for-hire truck drivers by 2020, disrupting not only the trucking industry but the economy as well, according to a Conference Board of Canada and Canadian Trucking Alliance (CTA) report.

The study finds that tens of thousands of current drivers are approaching retirement age and "a very small number of young drivers are taking their place."

"The challenges of the trucking industry aren't always top of mind in media circles and among decision makers," says David Bradley, CTA president and CEO. "However, with $17 billion in GDP directly tied to the for-hire trucking industry, and the indirect impact far greater, a driver shortage of this size is a threat to the health and competiveness of the Canadian economy and something we, as a nation, should start thinking about."

After Horse Meat Scandal, Tesco Reins in its Supply Chain

"Our frozen burger supplier used meat in our products that did not come from the list of approved suppliers we gave them," he says. "Nor was the meat from the United Kingdom or Ireland, despite our instruction that only beef from those countries should be used in our frozen beef burgers.

"Consequently, we decided not to take products from that supplier in the future; the breach of trust is simply too great," Smith says.

In light of current circumstances, Tesco has begun rolling out a new traceability and DNA testing system that will ensure the quality and safety of its food. The move is part of a pledge the supermarket has committed to in an effort to restore consumer confidence: source more meat closer to home where possible; build better relationships with farmers and growers; and increase transparency by sharing more information about suppliers.

In an open letter to Tesco customers, CEO Philip Clarke adds: "We will give you more information than any retailer has before to enable you to make informed choices about the food you buy. This doesn't mean more expensive food—it means doing things the right way and accepting nothing less than the highest possible supply chain standards."

South Africa's industrial base needs to address a number of institutional problems to raise its competitive stake on the global market—and introducing a progressive sustainability agenda isn't one of them. The government recently decided to delay implementing a carbon tax until 2015 after metals companies such as ArcelorMittal South Africa and Gold Fields raised objections.

As structured, the tax would attach $14 for every metric ton of carbon on 40 percent of a company's emissions, and rise 10 percent each year until 2020, according to South Africa's National Treasury. Pricing the external costs associated with CO2 emissions creates incentives to change behavior and encourage energy-efficiency measures. In 2009, officials stated that the country would aim to cut emissions 34 percent by 2020, and 42 percent by 2025, provided developed countries offer money and technical assistance.

How the country will use funds derived from the tax remains to be seen. But South Africa's mining and manufacturing industries argue that such an effort will stifle growth and investment. And the country has more pressing transportation concerns that deserve greater priority.