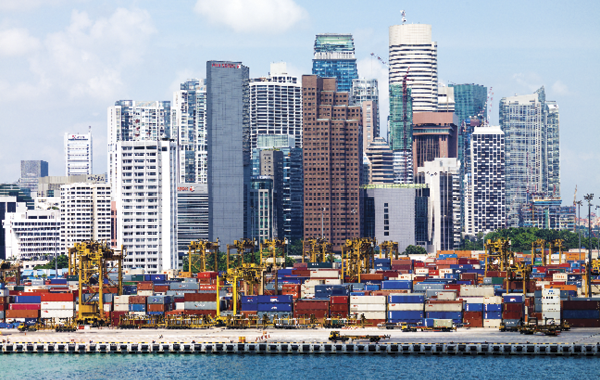 As Europe's economy copes with a sweeping debt crisis, and its Asian trade partners absorb the impact of declining exports and rising inflation, Southeast Asia is quickly becoming a center of attention—and transportation and logistics investment.

Malaysia, for example, is looking to become a key transportation and logistics hub for the Association of Southeast Asian Nations (ASEAN). Sharing borders with Brunei, Indonesia, Singapore, and Thailand, the country's unique location on both the Asian mainland and the Malay Archipelago is favorable to new investment and growth. Malaysia's government is planning to develop a global logistics hub—with four integrated logistics centers—in the Iskandar Malaysia development region located along the busy Straits of Malacca trade.

In 2012, Malaysia's trade with ASEAN amounted to $115.9 billion—or 27.3 percent of the country's external trade—with room for more growth. In an effort to stimulate intra-Asia trade development, the ASEAN Economic Community (AEC) plans to remove restrictions for logistics services by 2013, and allow other member countries to assume up to 70 percent equity participation in these services.

Other countries in the region have equally ambitious designs. At the extremes are Singapore, well-established as the foremost shipping hub in the world, and India and Indonesia, which remain independently saddled by poor transportation infrastructure and high logistics costs. In between, Vietnam has generated a great deal of buzz as a low-cost manufacturing alternative to China, and Laos is slowly emerging as a contender.

Landlocked Laos has captured China's attention because it's the key to a lucrative Thai consumer market. Lao transport infrastructure is notoriously lacking. Approximate to Utah in land area, it has 329 miles of paved roadways and two miles of rail—a spur from the capital city of Vientiane across the Thai border. China is looking to help the Communist government expand its rail presence with a $7.2-billion loan to finance constructing a 261-mile high-speed rail link between Kunming in southern China and the Lao capital.

Laos also acquired a $5-billion loan to construct a 140-mile rail line running across the southern part of the country to connect the Thai and Vietnamese borders. While there are concerns that Laos may be assuming more debt than it can handle, threatening a tenuous socio-economic balance, the potential benefits seem to be worth the risk. The country has no coastline or seaports, which puts it at a considerable disadvantage compared to other ASEAN neighbors. Better rail connectivity will help reduce transportation costs, and create a blueprint for future economic development.

China stands to gain even more, according to the Financial Times. The country invested $3.3 billion in Laos in 2012, mostly directed at its wealth of natural resources. Apart from tapping Thailand's growing consumer base, a Lao rail link would provide access to a new deepwater port project in Dawei, Myanmar. This would allow China a more direct overland route to a "new" western seaboard, as opposed to shipping around the Malaysian peninsula and through the Strait of Malacca.

Australia's Productivity Commission may take a thresher to regulatory bureaucracy in the food supply chain—a measure sure to please farmers who have long called for reform.

The review will form part of the federal government's inaugural National Food Plan, which will outline how Australia can become a more efficiently regulated country. The effort, which is expected to begin in 2014, will identify reforms that have the greatest benefit to the food industry and consumers.

The commission is taking a similar approach in other areas. It is undertaking a study to benchmark regulator engagement with small businesses to identify best practices and determine whether they can be used more widely to help reduce the compliance burden on companies.

In the mining sector, Australia's Productivity Commission is exploring how regulatory improvements may pave the way for a more efficient licensing process to counter a drop in new mineral site discoveries.

In yet another effort to bring more visibility to its supply chain, the fast food company's UK business has launched a program called "Quality Scouts" that invites members of the public to go behind the scenes to see how products are made.

Quality Scouts will investigate and chronicle the supply chain process from some of the 17,500 British and Irish farms that supply McDonald's, on through to food production and restaurants. The public will meet and interview farmers, food suppliers, and McDonald's employees to discover more about what's in their product and how it is made. McDonald's will then publish the Quality Scouts reports on its interactive Web site later in 2013.

Given the recent horsemeat scandal in the United Kingdom and Europe, knowing more about where food comes from is an important issue for most UK adults, according to a recent Populus poll of 2,000 consumers. Four out of five people say it is important that ingredients are traceable to the farm they came from, and more than half of adults (53 percent) consider how food is produced when deciding what products to buy.

Earlier this year McDonald's Australia introduced a mobile app that allows consumers to track the supply chain of their orders.

Students have the option of on-campus learning at USC in Los Angeles, or long-distance online coursework.

"The program is aimed at facilitating the needs of working professionals in the Asia Pacific region who wish to expand their knowledge of global supply chain management," the institute says.

The partnership is yet another sign that India is gradually easing its protectionist tendencies to tap outside resources and help spur a sputtering economy.

The U.S.-Mexico tariff truce may be short-lived. Less than two years after the countries finally came to an agreement over a NAFTA provision that would allow Mexican trucks on U.S. roads—thereby removing retaliatory duties Mexico had placed on U.S. exports—a dispute over the fairness of U.S. country-of-origin labeling (COOL) rules raises fresh concerns.

Mexico says the new U.S. rules for meat labeling are even more onerous than a set of regulations the World Trade Organization (WTO) declared unfair in June 2012. In May 2013, the Obama administration unveiled the latest requirements to comply with the WTO decision that upheld complaints by Canada and Mexico. Canada said it will also fight the revised COOL mandates.

Mexico argues the new COOL rule does not comply with WTO requirements, and will cause even more damage to Mexican meat exports.