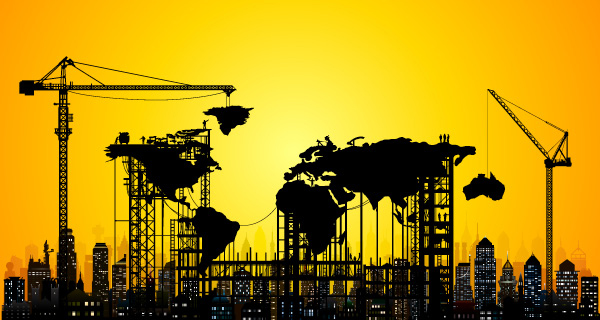 Numerous projects are highlighted for their potential contribution to job creation, economic growth, regional competitiveness, and innovative use of sustainable design. For example, the construction of the Auga Negra Binational tunnel, part of the Bioceanic Central Corridor, will drastically increase trade capabilities between Argentina and Chile. A long-debated new airport in Western Sydney, Australia, has finally entered the planning stages and is expected to create 60,000 jobs by 2035. On the Black Sea coast in Georgia, Eurasia, the Anaklia Port will increase logistics and natural gas export capabilities in the country.

Aside from compiling a list of the top 100 most impactful global infrastructure projects, CG/LA Infrastructure also addresses the future of such projects. The report points out three critical areas that must be focused on moving forward:

Addressing these factors can reduce many of the problems that exist in infrastructure projects. "There is a great, pent-up demand for infrastructure, and a global recognition that our failure of imagination is prolonging poor economic performance around the world," said CG/LA Infrastructure President and CEO Norman Anderson in a public statement. "Our challenge as an industry is to advocate creatively, energetically, and effectively to double the world's investment in priority infrastructure, driving growth and opportunity, and putting savings to long-term, productive use."

Global airfreight markets expanded 2.2 percent in 2015 compared to 2014, according to the International Air Transport Association (IATA), which released figures showing cargo volumes measured in freight ton kilometers (see chart). This was a slower pace than the five-percent growth recorded in 2014. The weakness reflects sluggish trade growth in Europe and Asia-Pacific.

After a strong start, airfreight volumes began a decline that continued through most of 2015, until some improvements in world trade drove a modest pickup late in the year. Cargo in Asia-Pacific, accounting for approximately 39 percent of freight traffic, expanded by a moderate 2.3 percent.

The key markets of Europe and North America, which between them comprise about 43 percent of total cargo traffic, were basically flat in 2015. Latin America suffered a steep decline (-6 percent) while the Middle East grew strongly, up 11.3 percent. Africa also saw modest 1.2 percent growth. 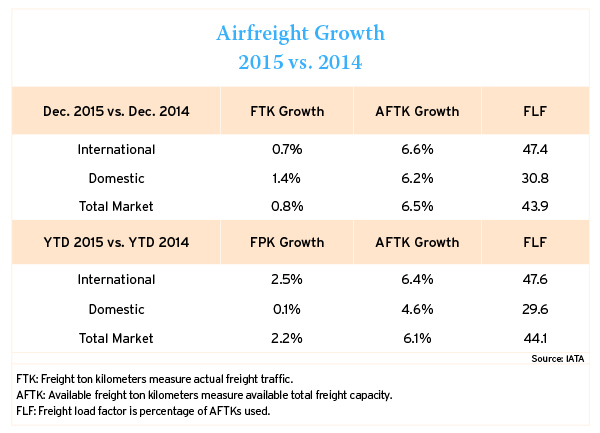 As logistics and manufacturing costs continue to rise in traditionally popular areas such as China, new emerging markets take on increasing importance for the supply chain. Emerging markets are expected to grow at a rate of 4.7 percent in 2016, according to 1,100 supply chain executives surveyed for the 2016 Agility Emerging Markets Logistics Index.

Despite their optimistic outlook, 61 percent of those surveyed also expect the volatility and uncertainty seen in 2015 to continue. But considering that emerging markets grew between 3.6 percent and 4.2 percent in 2015, down from 4.5 percent in 2014, the higher 2016 estimate is welcome news for global supply chains.

The instability seen throughout 2015, however, left its mark on the results of the index, which ranks the world's 45 leading emerging markets based on size, business conditions, infrastructure, and other factors that make them attractive to logistics providers, freight forwarders, shipping lines, air cargo carriers, and distributors.

While China maintains its place as the number-one emerging market, the United Arab Emirates (UAE) climbed four places to rest at number two. UAE offers a network of 34 free trade zones, and a friendly financial and tax environment for businesses. In addition, the country offers a vast pool of low-cost, skilled migrant labor, making it an ideal location for hubs and other logistics operations.

Another up-and-comer is India, which returned to the number-three position on the index for the first time since 2013. India's rise can be attributed, in part, to the pending Goods-and-Services Tax, which is expected to increase the country's GDP by more than 2 percent. But India still struggles with infrastructure problems and transit delays, so whether it can maintain momentum in years to come remains to be seen.

Malaysia also climbed four places on the index, to sit at number four this year. The country has shifted from a role as a raw materials exporter into a leading exporter of electrical appliances and parts, as well as palm oil.

Meanwhile, instead of climbing, other countries have fallen down the list. Brazil continues to deal with government gridlock and massive infrastructure inefficiencies, and dropped down to number six from its traditional place in the index's top three. Falling oil prices also dropped Saudi Arabia and Indonesia to fifth and seventh place, respectively.

Rounding out the list, and holding its spot at number 10, is Turkey. The country maintains its position as a strong manufacturing hub for Europe and the United States.

As the global economy continues to recover, and countries struggle to restructure their economies and find new roles in a changing world, global supply chain and logistics executives will need to watch the changes closely to find the best locations to expand their operations.

Markets on the Move

Volatility in the global economy was mirrored in the 2016 Agility Emerging Markets Logistics Index. Eight of the top 10 emerging markets’ economies shifted places. Nigeria and Egypt both jumped 10 spots, the largest improvement by any country since the Index was first published. 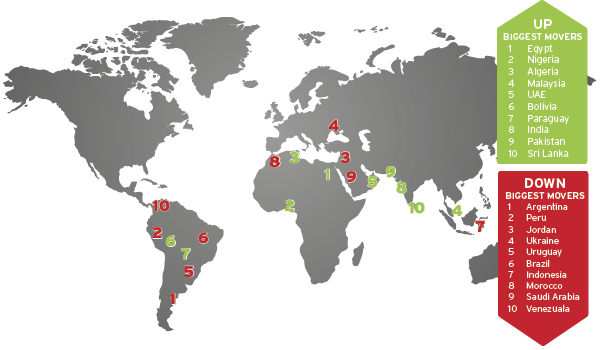 Four emerging trends will drive the global furniture logistics market between 2016 and 2020, according to global technology research and advisory company Technavio: