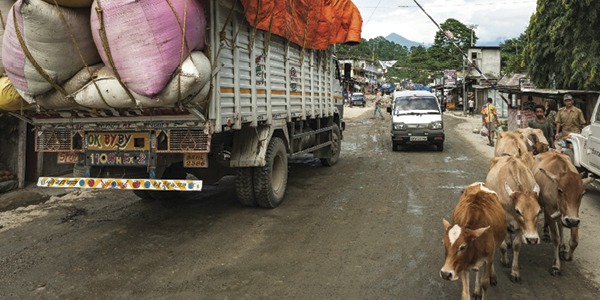 "India could accomplish more if it had better infrastructure and the ability to scale up to get products to its villages," Blasgen noted during a CSCMP seminar in Kolkata, India.

For example, the country passed a food security bill, but has yet to implement it. Getting rice and food grains to villages remains a supply chain challenge. "There's going to be a huge opportunity once infrastructure bottlenecks are removed," Blasgen notes.

The cost of movement in India is also an issue because of long routes. "The U.S. highway network has become an interstate commerce system; it allows long-distance travel efficiently," he says. "Similarly, India has a huge road structure. But eliminating barriers and congestion—and creating a road or rail system that allows long-distance travel—will help open up markets."

Because pressure on India's roads and railways is immense, the country needs alternatives such as an inland waterways system, Blasgen suggests. "The United States has a barge system where goods such as copper or steel, or those that are not time-sensitive, are moved in large quantities at low cost," he says.

The Indian government has an opportunity to connect its water, rail, and road systems with the ports, which will result in better movement of goods without obstruction. "That will help bring in manufacturing, and allow India to step up and be a global player," Blasgen says.

Scheduled to begin in mid-2014, the alliance reflects the structural challenges still facing the container shipping line sector: too much capacity chasing not enough cargo, resulting in a brutally competitive market and significant financial losses for big and small players alike.

As with the G6 and other groupings, this P3 Alliance will provide the participants with opportunities to share capacity across trade routes, thus alleviating operating costs while maintaining services in terms of port calls, schedules, and frequencies.

That the "big three" feel it necessary to collaborate reflects the pain that even the largest lines are suffering in the current climate, while confirming that cooperating with competitors through an alliance is a path to alleviating some of that pain.

The impact for shippers is further reduction of choice, together with uncertainty about which individual line within the alliance (P3 or G6 or other) will actually carry their cargo.

Depending on which line carries their containers, shippers could experience differing service standards, variations in vessel routing and port calls, and, in some cases, cargo arriving at a different terminal at the destination port.

The port-to-port ocean move, however, is but one component of the shipper's global supply chain ecosystem. Shippers are increasingly focused on the total end-to-end supply chain. In many cases, they perceive the ocean freight portion as a commodity, and are concentrating optimization efforts on the inland components of the supply chain, with specific emphasis on port-centric logistics and multi-modal hinterland connectivity.

In the context of multiple supplier alliances, now may be the time for shippers to consider combining their volumes and forming freight-buying consortia to further leverage collective scale economies on targeted routes while continuing to compete and differentiate across other components of their supply chain ecosystems.

E-commerce is growing by leaps and "loonies" in Canada, but still lags behind the United States—presenting challenges and opportunities for U.S. companies looking to tap that market.

The value of orders placed online by Canadians reached $18.9 billion in 2012, up 24 percent from 2010, reports Statistics Canada. More than half of Internet users (56 percent) ordered goods or services online in 2012, compared to 51 percent in 2010. The majority (82 percent) placed an order from a company in Canada, 63 percent ordered from the United States, and 21 percent ordered from another country.

One peculiarity of the Canadian e-commerce market is that, despite the country's high IT readiness and connectivity, consumers are not inclined to shop online. Canada ranks as an "average" e-commerce country, with online sales expected to make up approximately 5.3 percent of the country's total spending by 2016.

If Statistics Canada's numbers are any indication, however, consumers are swiftly changing their habits. As U.S. e-commerce matures, more online retailers are looking to international markets—notably Canada—to expand their sales. This will likely place more competitive pressure on Canadian e-tailers to develop their virtual storefronts or risk losing out on a lucrative revenue stream.

Contrary to popular assumption, the United States actually imports its live poinsettias from Canada, not Mexico. 2013 was the first time in four years that poinsettia imports have even arrived from south of the border—not from Mexico, but from Guatemala and El Salvador.