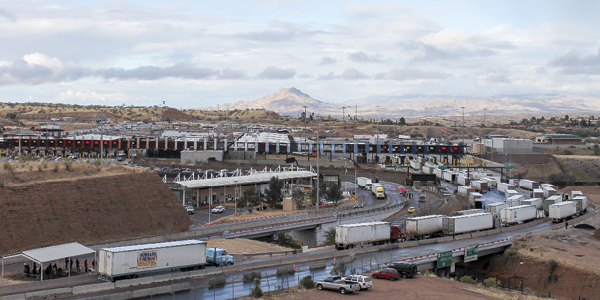 Under the old customs clearance system, truckers aiming to cross between the two countries were stopped a few miles from the border on either side. While stopped, customs officers would check their paperwork, and inspect their cargo—sometimes asking that truckers unload then reload the entire shipment. Then they'd cross the border and go through the process again on the other side. Previously, trucks waited an average of three to nearly four hours for border inspections to be completed.

The Unified Cargo Processing project has cut that wait time to about 25 minutes, as CBP and SAT officers work together to perform a single inspection, according to Mexican Customs Administrator General Ricardo Treviño.

"The Unified Cargo Processing program saves time, and it saves trade stakeholders money," said Gil Kerlikowske, commissioner of the CBP, during a recent media event. "That means that cargo, especially produce that is subject to environmental concerns, moves more quickly."

The Port of Nogales commercial facility can currently accommodate about 5,000 trucks per day. Trucks using the new program must be C-TPAT certified, otherwise they are subject to the old inspection procedures and wait times.

The pilot program was originally scheduled to last 90 days, but may end early due to the amount of positive feedback and data already acquired. "Frankly, I'm not sure we're going to need 90 days," Kerlikowske said.

Similar programs have been tested in seaports and airports on both sides of the border, but the Nogales project marks the first land port of entry to successfully implement a unified inspection program.

The Nogales port processed 256,895 containers in 2015, according to the Department of Transportation, making it the fifth-busiest land port of entry for truck containers on the Mexico border.

"The message of this program is that we are working together," Guillermo Valencia, chairman of the Greater Nogales and Santa Cruz County Port Authority, told local news outlet KGUN-9.

"In this year's presidential election campaign, you hear other things about the border," he noted. "This border is not here to divide us; it is here to connect us. We are showing people that if we work together, we come up with great ideas, and can do great work."

The second quarter of 2016 saw strong merger and acquisition (M&A) growth in the transportation and logistics sector, according to Global Transportation and Logistics M&A Deals Insights Q2 2016, a new report from consultant PricewaterhouseCoopers (PwC).

More than 50 M&A deals occurred globally in Q2. Deal value for the quarter was about $34 billion, a decrease of 22 percent compared with 2015, but 20 percent higher than the first quarter of 2016, according to the report.

According to PwC's report, the following four factors should contribute to continued positive activity for transportation and logistics M&A in the near future: 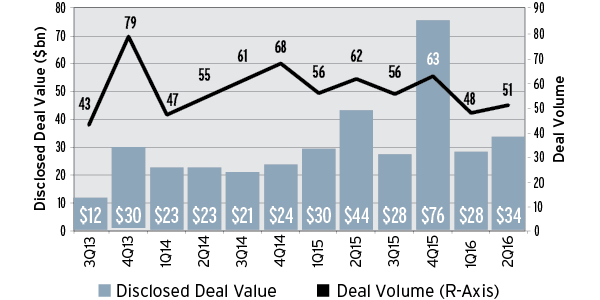 Will Chinese Rail Project in Kenya Win Over Locals?

Kenya is looking forward to the completion of one of the largest transportation projects in its history: a $13.8-billion rail project that will connect the Port of Mombasa to Nairobi and other parts of East Africa

State-owned China Road and Bridge Corporation (CRBC) is building the railway; the Export-Import Bank of China is financing 90 percent of the Mombasa-Nairobi section's ongoing development. CRBC also oversees multiple related projects, including building roads that allow for intermodal transport between the new rail line and the country's existing highway structure.

This project is exciting for Kenya's economic future, but many Kenyan workers aren't as optimistic. On Aug. 1, 2016, workers at the CRBC construction site in Nakuru went on strike for higher wages, demanding $5 USD per day, instead of the $2.50 they currently receive. The next day, residents of Kenya's Narok County stormed a local construction site, injuring 14 Chinese workers.

Despite two years of complaints that CRBC imports Chinese labor, operates under bad labor conditions, steals water from local villages, and takes sand from local beaches for projects, the company maintains it has done a lot of good in the country. For example, it built new roads and repaired a number of important existing roads, provided education to Kenyan students in railway engineering, and sunk boreholes in a number of areas to provide better access to water.

"We see ourselves as not just here to build a railway track between Mombasa and Nairobi," says Steven Zhao, manager of external relations and co-operation at CRBC. "We see ourselves as a transformative agent among the people in the areas we operate."

Asia-Pacific airlines report a 3.5-percent increase in demand for air cargo in June compared to 2015, while capacity expanded 3.6 percent. The Asia-Pacific airfreight market has been improving in recent months, most notably the large "within Asia" market. Despite that, freight volumes from "emerging Asia" continue to face headwinds from weak trade in the region and globally.

European airlines posted a 5.1-percent increase in freight volumes and a 4.9-percent increase in capacity in June 2016. The positive performance corresponds with signs of an increase in export orders in Germany over the past few months. Seasonally adjusted freight results for Europe are now trending upward.