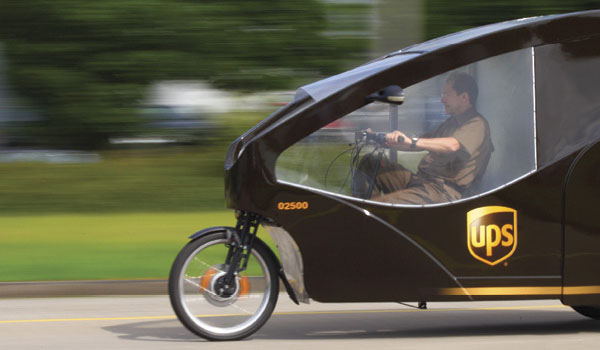 That's why UPS is currently testing the feasibility of using electric cargo bikes to pick up and drop off packages in downtown Basel, Switzerland. The company is already piloting a similar program in Hamburg, Germany. The battery-supported tricycle can carry loads weighing up to 330 pounds.

"By using cargo bikes in a targeted manner, UPS aims to reduce inner-city congestion, noise, and emissions," explains Philip Healey, marketing manager at UPS Switzerland. "This form of urban delivery also offers a distinct advantage to UPS, as it reduces the time spent searching for a suitable parking position."

The Basel pilot is part of a global UPS strategy to eliminate greenhouse gas emissions from its operations. In 2013, the global expediter reduced absolute CO2 emissions by 1.5 percent compared to the previous year, even as global transport volume increased by nearly four percent during the same period.

A slowdown in China's economy has given investors pause. GLP, the largest owner of logistics facilities in the country, has acknowledged it will draw down development projects as the economy continues to experience growing pains. China's transition from traditional export-focused manufacturing to newer, consumption-oriented industries is ongoing.

GLP says it plans to cut annual targets for new starts to $1.7 billion from $2.2 billion, and lower completions by 20 percent to $1.1 billion. It isn't a complete withdrawal. The company knows that China's booming middle class and e-commerce growth potential will eventually turn the tide.

But for the time being, it has its sights set on another emerging growth market—the United States.

As GLP slows China activity, it's ramping up U.S. investment with the announcement that it will buy more than 200 warehouses appraised at $4.55 billion from Industrial Income Trust—a deal that will make it the second-largest industrial real estate owner in the United States after Prologis. The acquisition features 58 million square feet of industrial capacity in 20 major markets, including Los Angeles, Washington, and Pennsylvania. It expands GLP's existing U.S. footprint by 50 percent to 173 million square feet.

The move is also indicative of the current land grab as real estate investors look to lock up distribution capacity to match growing e-commerce demand.

U.S. Manufacturing Holds Its Own

The inflation of U.S. currency against the rest of the world in 2015 puts domestic production at a disadvantage — especially as talk of a manufacturing renaissance and renewed reshoring resonate. In spite of this challenge, U.S. manufacturers continue to hold an edge over leading economies such as Germany, France, Japan, Australia, and Brazil, according to a Boston Consulting Group (BCG) report.

Manufacturing cost advantages of South Korea, India, Mexico, and China have narrowed considerably — especially compared to Europe and Japan — because their currencies remain relatively stable against the U.S. dollar, according to BCG’s report. Switzerland and South Korea, notably, have lost ground against other export markets because of currency fluctuations.

By contrast, the devaluation of the euro had a positive effect in the Czech Republic and Poland, where average manufacturing costs are now lower than in the United States.

“While the major drop in the euro has reduced costs for European exporters, they’re still about 10 percent more expensive on average than U.S.-based manufacturers,” says Harold Sirkin, a BCG senior partner and co-author of the analysis. “The United States remains one of the lowest-cost locations for manufacturing in the developed world.”

This trend has been emerging over the past few years. Several economies traditionally regarded as “high cost,” including the United States, have become more competitive. By contrast, emerging markets known for low costs — notably China — have become far more expensive.

How so? U.S. labor productivity continues to offset increases in wages, and the drop in energy prices as a result of natural gas development further enhances total landed cost competitiveness.

The bi-national Great Lakes Seaway Partnership is mandated to help publicize the benefits of commercial shipping in the Great Lakes Seaway region through education-focused communication and research. The organization will serve as a platform to discuss the economic, environmental, and safety benefits of leveraging the shared waterway for national, bi-national, and international trade.

"While the program does not have an advocacy agenda, we anticipate it will engage stakeholders by providing industry news, reports and studies, and opportunities for them to understand the impact Great Lakes Seaway shipping has on the economies of both the United States and Canada,"says Mark W. Barker, president of the Interlake Steamship Company and chairman of the new program.

Rail transportation in China has traditionally focused on passenger movement, which isn't surprising given the inherent challenge of mobility in a population 1.3-billion strong. But new research from the World Bank suggests freight rail is fast gaining traction.

The growth potential for container-by-rail is considerable, especially as the country continues to develop transportation and logistics infrastructure, and adopt industry best practices, according to the report, Customer-Driven Rail Intermodal Logistics: Unlocking a New Source of Value for China.

As its economy combats inflation, and less-expensive manufacturing pushes into the hinterland, China will place greater emphasis on keeping transportation and logistics costs in check. Rail transportation is favorable, given the sheer volume of trade moving long distances within the country.

"A more intense use of rail as part of the country's containerized freight delivery logistics system could be a game-changer for Chinese manufacturers and consumers, as we have seen in North America," says Luis Blancas, a World Bank senior transport specialist and lead author of the paper.

"That's because more and more manufacturing has moved to China's western provinces, which increases the distance of international and domestic shipments," Blancas explains. "At the same time, China's highways are becoming more congested, making it difficult to deliver goods and get value-for-money in trucking services."

Since 1998, freight container traffic in China has grown faster than the rate of economic growth. While volume on trucks and ships has similarly increased, however, the use of rail intermodal has dropped during the same period. Remarkably, less than two percent of container traffic through China's ports features rail.

Depending on trucks so much raises obvious congestion and environmental concerns. World Bank suggests China is primed for further regulatory reforms that empower rail operators to invest in services and make freight rail a more competitive option. To that end, the report cites North America's own rail renaissance following the Staggers Rail Act of 1980 and deregulation. China shares similar geographic constraints, and it's the origin for many of the supply chains served by rail intermodal in the United States.

As China's economy evolves, and low-cost labor is no longer the magnet it once was, transportation and logistics efficiency becomes more important. The freight railroad is an important cog in this maturing network. In fact, China Railway Corporation, the country's national rail operator, initiated reforms in 2013 to improve operational efficiency and customer service, with more flexibility in setting rates and offering services based on supply and demand.

Mercedes-Benz intends to reduce logistics costs per vehicle by 20 percent, a remarkable goal by any measure. While the automaker has expanded production beyond Germany over the past decade to serve new markets, many of its parts suppliers are still located in Europe, which contributes to high logistics costs—even exceeding manufacturing spend in some scenarios.

"With more than 30 vehicle derivatives, each built from several thousand parts, the complexity is immense," says Markus Schäfer, head of production planning for Germany at Mercedes-Benz U.S. International.

To help address this issue, the company recently opened a $98-million consolidation center in Speyer, Germany, to specifically bundle and package components from European suppliers and send these pre-sorted parts to plants around the world. Mercedes plans to establish similar facilities in strong growth markets. It is also looking at using automation on the assembly line to help stage pre-sorted components on demand.

With the goal of becoming the world's largest luxury carmaker by 2020, Schäfer is also restructuring governance within the company's global network—eliminating the role of plant director in favor of global, architecture-based clusters that boost flexibility. For example, one global manager is in charge of all compact cars manufactured in Germany, Hungary, and China. This will help Mercedes manage 11 production ramp-ups on six sites in 2015 alone, while ensuring quality control at its own factories and those of its 1,500 suppliers.