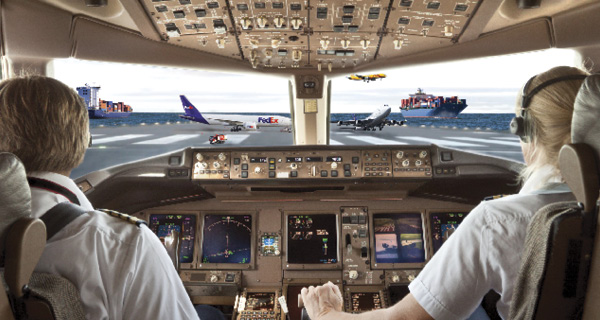 Times are tough for the air cargo industry. Despite the fact that the rest of the world seems to be recovering from the global financial crisis, air freight just can't seem to sustain any type of upward momentum. The industry has gone from a $67-billion annual profit in 2011 to just $50 billion in 2015, according to a report presented at the Air Cargo World Symposium in Berlin in March 2016.

Many factors are choking the air cargo sector and causing some cargo-only airlines to cease operations. These include:

So what can the air cargo industry do? The International Air Transport Association (IATA) thinks the way forward lies in technological advancement. If the airfreight industry wants to stay in the clouds, changes will have to be made—and quickly.

"Developments such as e-tickets, barcoded boarding passes, airport self-check-in kiosks, and in-flight Wi-Fi have transformed the passenger experience. Is it a coincidence that after a decade of change, load factors are at record highs and airlines are finally rewarding their investors with adequate returns?" says Tony Tyler, IATA director and CEO. "We need similar breakthroughs on the cargo side of the business.

"There are lots of potential disruptors out there—data-sharing platforms, new market entrants, and e-commerce," he adds. "The challenge is to stay one step ahead in satisfying customer expectations."

This may be easier said than done, but with the IATA predicting another 5.5-percent drop in cargo yields in 2016, the industry may no longer have any choice but to implement new practices, make major technology and service investments, and then hope for the best.

With limited opportunities for growth in China, nearly half of the strategic and financial investors responding to the survey are setting their sights across the ocean to the United States and its 47-percent economic growth potential.

"Companies that were accustomed to growing 15 percent to 20 percent just by relying on the Chinese economy to supply them demand can no longer grow like that," says Nima Amini, a partner in O'Melveny's Hong Kong office. "Additionally, the competitive landscape in China is dramatically increasing."

The survey results also contradict themselves, with 38 percent of respondents viewing U.S. regulatory structure and laws as attractive, while 48 percent see the same legal structure as an investment barrier.

"The very attributes that make the United States the most attractive destination for investment in the world can also present challenges to investors," says Steve Olson, a partner in O'Melveny's Los Angeles location.

"We are the largest fully developed consumer market in the world, but a highly competitive market," he adds. "We're the most open economy in the world, but certain foreign investments will be reviewed for national security implications. We're blessed with an effective and predictable legal system, but U.S. businesses face a high rate of litigation."

If the survey results prove accurate, the manufacturing and transportation sectors can expect significant investment offers from potential Chinese partners in the months to come.

Here are some additional key results of the O'Melveny report:

To address new airport noise regulations, Lufthansa is fitting its medium-haul Airbus A320 fleet with "sharklets," which are 7.8-foot wingtip extensions. The sharklets' design is modeled after nature. Large birds, such as cranes and condors, bend their outer feathers upward and thus fly in a more energy-efficient way. Accordingly, sharklets reduce lift-dependent resistance and improve aerodynamics at the wingtips.

Depending on the length of the route, the sharklets offer approximately four percent in fuel savings, along with correspondingly low CO2 emissions. The sharklets improve the plane's climbing performance, thereby reducing noise emissions during take-off.