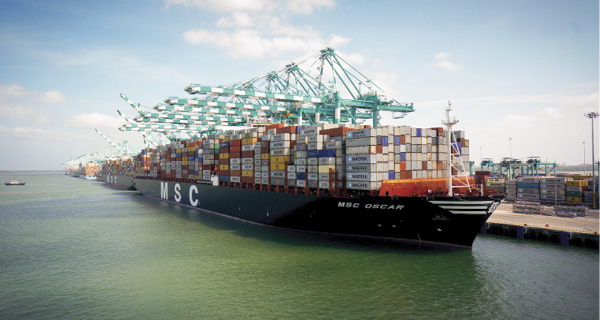 The MSC Oscar is currently the world's largest containership with a 19,000-TEU capacity. But CMA CGM SA plans to up the game with its new series of megaships.

When Maersk Line introduced its Triple-E class of containerships in 2013, it raised the bar for the ocean shipping industry. China Shipping Container Lines and Mediterranean Shipping Company have since brought vessels online that top the 19-thousand TEU threshold. But now France's CMA CGM SA, the third-largest container line in the world by volume, plans to order a new series of megaships surpassing 20 thousand TEUs.

While larger ships are generally more energy efficient, and provide greater economies of scale, they also pose new challenges. Only a limited number of ports can accommodate their size, and loss or theft has greater consequences.

Allianz Global Corporate & Specialty SE's (AGCS) third-annual Safety and Shipping Review 2015 documents some of these new concerns. "Larger ships also mean larger losses. The industry should prepare for a loss exceeding $1 billion in the future, featuring a container vessel or even a specialized floating offshore facility," says Captain Andrew Kinsey, senior marine risk consultant for AGCS. "Maximum exposure would not necessarily be limited to vessel and cargo value, but could also include environmental or business interruption backlash."

The growth in vessel sizes only concentrates risk. For example, protection against cyber hacking is a new threat for a highly connected and automated shipping sector that increasingly relies on electronic navigation systems. And a worldwide shortage of qualified seafarers requires asking smaller crews to do more with less. Larger ships push that threshold even further.

On the positive side, shipping losses continue to decline—by 32 percent year-over-year in 2014, and by more than 50 percent compared to 2005 data.

The most common cause of total losses is foundering (sinking/submerging), accounting for 49 incidents in 2014, followed by grounding (13), and fires/explosions (4).

More than one-third of 2014's total losses were in two maritime regions: South China, Indo China, Indonesia, and the Philippines (17 ships); and Japan, Korea, and North China (12 ships). Cargo and fishing vessels accounted for more than 50 percent of all losses, according to Allianz.

Although the global shipping industry has made great progress thwarting piracy activity off the coast of Africa, the threat is shifting into Southeast Asian waters, where incidents increased year over year in 2014.

In yet another sign that resistance to shale gas exploration in some parts of Europe is easing, UK ports operator Peel Group has launched a new oil and gas business to help develop supply chain connections in the north of England. The venture is purposed to encourage investment in infrastructure necessary to support shale gas development in the region. Peel will leverage its land, infrastructure, utilities, transport, and planning assets to facilitate connections.

"The emerging onshore shale gas sector is a golden opportunity for the United Kingdom and the North in particular," says Myles Kitcher, Peel Gas & Oil managing director. "Momentum in this region is growing, with the government announcing the new National College for Onshore Oil and Gas, based in Blackpool and linked to the University of Chester."

On the Continent, optimism is less rosy. Russia's geopolitical posturing over the past year has forced countries to reconsider their single-source oil and gas strategy. North America's energy independence and reshoring renaissance has similarly kindled interest in replicating that model to help stimulate economic growth.

However, bureaucracy and ambivalence toward hydraulic fracturing have largely tabled development thus far. Recent news that Chevron, Exxon, and Shell are pulling out of Central Europe suggests shale gas development will be sluggish until a sustained recovery in oil prices and/or countries are willing to prioritize energy security and independence over environmental mandates.

While China has commenced plans to start building a canal across Nicaragua that would rival its famous neighbor, scientists are alarmed over the potential environmental impacts of such an undertaking.

The Nicaragua Interoceanic Grand Canal project intends to build a 180-mile waterway between the Atlantic and Pacific oceans by 2019, cutting through Lake Cocibolca (Lake Nicaragua)—Central America's key freshwater reservoir. If constructed, about 5,100 ships will pass through the canal each year. 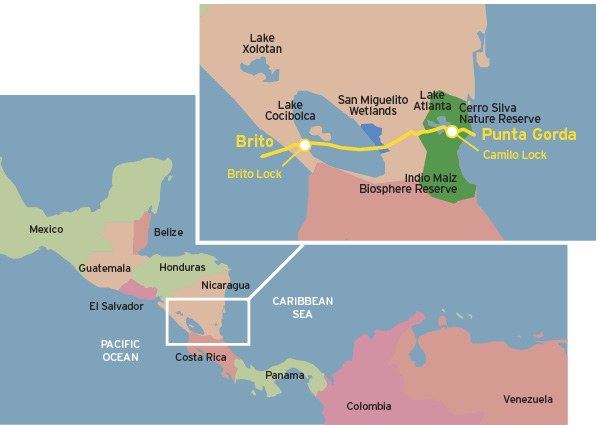 Echoing memories of China's ambitious Three Gorges Dam project, the planned canal would displace 30,000 Nicaraguans. Moreover, a group of international scientists across the United States, South America, and Central America recently co-authored an article in the Environmental Science and Technology journal that underscores the project's potential negative impact on the local ecosystem during and after construction.

"Invasive species brought by transoceanic ships could threaten the extinction of aquatic plants and fish, such as cichlids, that have been evolving since the lake's formation," saysPedro Alvarez, an environmental engineer at Rice University in Houston, Texas.

To ensure large ships can pass through the canal, frequent dredging will be required, which means dispersing sediments, lowering oxygen levels in the water, and killing native marine life. Water from Lake Nicaragua is also used for irrigation, drinking, and power generation. Once the canal is constructed, water will not be suitable for drinking or irrigation.

The scientists are calling for the project to be postponed until potential environment impacts are further assessed.

Up in the Air: Total Value of U.S. Imports