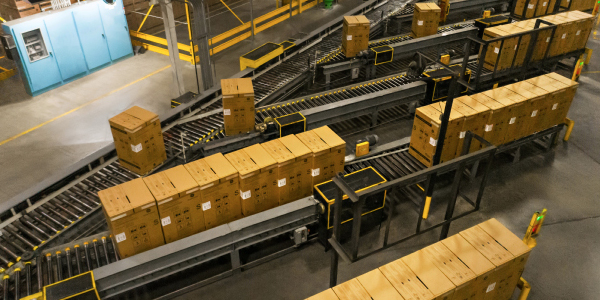 GE Appliances' smart distribution centers use data and IoT technology to ensure the right product is available at the right time for the right customer. The new digital process improves data accuracy, streamlines inventory management, and increases capacity and reliability.

Do you think about how big appliances, such as refrigerators, washing machines, and dishwashers, move through the supply chain—from the factory to a homeowner's property or a commercial apartment building? Mark Shirkness does, every single day.

As vice president of distribution and services for GE Appliances, one of the largest appliance manufacturers in the world, Shirkness compares his team's job to air traffic controllers.

"At any given time, I am following more than 1,000 dots on a map," he says, referring to the number of shipments he and his team track.

GE Appliances—a brand known in the United States since the early 1900s that now falls under Haier's corporate umbrella of companies stretching across Asia, Europe, and the Americas—produces refrigerators, freezers, cooking products, dishwashers, washing machines, dryers, and other large white goods. GE Appliances' products are in half of all homes in the United States, Shirkness says.

Its main customer base runs the gamut from big-box retailers such as Lowe's, Best Buy, and Home Depot down to mom and pop appliance stores. It is also involved in the contractor and builder segment, which includes everything from single-family and multifamily homes to apartment complexes, hotels, and motels.

The company's Louisville, Kentucky, Appliance Park headquarters houses 6,500 employees, and among them, nearly 1,000 manufacturing design engineers. Manufacturing is spread over five buildings at the campus, adding up to about 1 million square feet. Beyond Louisville, the company operates a refrigeration plant in Decatur, Alabama; a cooking plant in LaFayette, Georgia; a high-end refrigeration and air conditioning products plant in Selmer, Tennessee; and is currently retooling a Camden, South Carolina, facility to produce water heaters.

Finished appliances move from the factories to one of the company's 12 area distribution centers in the United States. The company also runs four parts distribution centers, or what Shirkness calls "dispatch centers," to fulfill product and customer service requirements. GE Appliances also operates a network of about 155 final-mile delivery hubs, or what it refers to as local delivery sites.

To move products from the factory to the warehouse and from the warehouse to the customer, GE Appliances relies mostly on an intermodal transportation strategy. The bulk of shipments move by truck via its contracted carrier base, some dedicated fleets, and a small private fleet. Some products also go by rail.

"It's an expansive distribution network," notes Shirkness, who has been with the company for nearly 34 years, 12 of which have been in his current distribution role. "Once product comes off the manufacturing line, my group owns it from there on out. We are always asking, 'Where is the product going? Why is it going there? How is it going to go there? How fast can it get there?'"

Synchronizing all these points is no small feat, and in recent years, it has become a target area for improvement.

GE Appliances began thinking about a move into smart distribution around 2016-2017, soon after Haier acquired the company. At the time, the corporate vision began to shift toward scaling growth without adding more concrete to the company's physical footprint.

"We started with the groundwork of how to double in size and how to do it smartly," recalls Shirkness. "This also came through the lens of what will be good for our customers and trade partners."

From there, the company framed its approach around leveraging innovative ideas and changing the methodologies used in the warehouses and the infrastructure supporting them.

For example, GE Appliances reexamined the efficiencies around how products moved and in out of the warehouses. Certainly, solutions such as robots, automated retrieval or storage technology, cutting-edge conveyance systems, or automatic guided vehicles could have helped streamline warehouse activity. But, Shirkness says, the team kept drilling down, looking at all the steps in the order and inventory management process, and recasting solutions to make the entire flow more effective.

"Traditionally, you bring product into a warehouse, put it away, and then pick it again when you get an order," he says. "Then it has to go to a shipping station and from there a myriad of packaging and labeling functions." Typically warehouse improvement projects are viewed through this lens.

"Yes, we could make those existing processes incredibly more efficient," Shirkness adds. "But what if we chose a different approach and asked, 'Why do we even put products away? Why can't we just have a truck show up, take the appliances off the truck, scan the items, and then use that magic box of big data and artificial intelligence to tell us where those products go next?'

"If we know, for example, that in 36 hours we will have to ship those appliances to one of our big-box customers, why don't we put them by the dock door and eliminate all the product handling in the warehouse?" he adds.

Filtering the warehouse and distribution process through these varied perspectives helped GE Appliances break down its old, manual visibility-tracking paradigms and redesign for smart distribution, something it began in earnest in late 2018.

One outcome of this smart distribution analysis was better designing the physical layout of the company's new facilities in Atlanta, Jacksonville, and Denver. A notable adjustment was adding as many doors as possible to every available side of the buildings, instead of adding more space inside the warehouse.

With more doors and docking stations on the perimeter of the building and ultra-big parking lots to accommodate more trailers, GE Appliances can reduce its inventory-holding space and speed the transition between factory drop-off and outbound customer shipments.

On the technology side, with the help of its SmartHQ Distribution module, which is part of the company's farther-reaching SmartHQ Solutions, GE Appliances uses big data, sensors, cloud-based yard management systems, and other tools to increase overall warehouse efficiency.

"We pour more concrete to make a parking lot than we do inside a building," says Shirkness, adding that the company's facilities tend to be more cigar-shaped rather than square to better accommodate loading and unloading trucks.

"By using big data, we can string what we call the digital thread through our operations," he says. "We unload the trucks only when we have to, and that creates greater speed, throughput, and velocity of that product through our buildings."

The idea for the broader SmartHQ Solutions suite started with the intention of making it easier for customers to manage their relationship with GE Appliances, from ordering through shipping and delivery, as well as service and maintenance requests. It was also a way to consolidate the various IT platforms different in-house organizations used.

Shirkness compares it to reining in on-demand entertainment services. "From a consumer's point of view, it was liking having Hulu, Netflix, HBO, and Amazon; you have to check all these different places to see different shows," he says. "SmartHQ Solutions lets you click just one icon and see everything across all these services.

"We designed SmartHQ to aggregate and pull together the entire world of GE Appliances so our customers can seamlessly, and with less effort, do business with us," he adds.

To date, the results have made the initiative worth the investment. Intelligent business design in GEAppliances'smartwarehouse solution has significantly reduced product handling, in some cases by 50%, which reduces product damage and increases efficiency.

In addition, GEAppliances' smartwarehouses make better use of space.The company could now expand the size of a warehouse by 33% while increasing output by 100%, thanks to its new building designs and technologies.

staying ahead of Volatility

Notably, too, the use of smart-based visibility tools has made the COVID-19 outbreak easier to manage, at least from the supply chain side.

"The ability to have this level of transparency, not only into our end-to-end supply chain, but also into our entire value chain, allows us to know what is transpiring in each moment of the day," he explains. "That information allows us to react and respond accordingly. We have to stay one step ahead of the volatility."

Going forward, Shirkness says the company is looking into drone-run cycle counting and reinstituting a pilot project focused on using automatic guided vehicles for limited product movement around the warehouses.

GE Appliances, a Haier company, wanted to move away from manual visibility tracking across warehouse and distribution centers, and make it easier for customers to manage their end-to-end orders, shipments, and service requests.

The company developed its SmartHQ Solutions suite in-house. It uses a smartwarehouse and distribution module to manage its distribution centers.