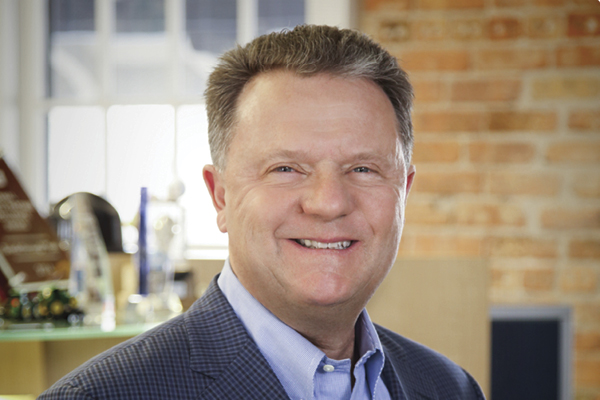 Doug Mueller was enjoying a long, happy career at Schneider National when Craig Dickman, a former colleague, proposed Mueller join him in a new kind of business.

Breakthrough Fuel would help shippers save money on fuel surcharges, allowing them to base those charges not on a nationwide index, but on the prices that carriers actually pay for fuel to move specific loads.

"It was a tremendous opportunity," Mueller says. But, as a startup, it also posed significant risk. Mueller considered the pros and cons for a long time.

He chose to make the leap, joining Breakthrough Fuel as its president in 2007. Since then, Breakthrough has grown into a global transportation energy management and advisory firm. In early 2018, Mueller was named its CEO, succeeding Dickman, who remains as chairman.

As he transitioned to the new role, Mueller talked with us about his leadership style and the industry changes he foresees.

IL: As you help shippers create a new basis for assessing fuel surcharges, do you get much resistance from carriers?

We got huge resistance in the early years, largely because we were introducing the unknown. We overcame that by getting carriers to focus not on how they used to do things, but on their actual costs. What do you really buy at, and what do you consume at? Fuel is volatile. But under our system, on every movement, every day, the reimbursement matches the actual cost of fuel. This takes out all the fluctuation and distortion, allowing the carrier to more accurately represent the value of the services it provides to shippers. The resistance of the early years has changed dramatically, because we're prevalent with large shippers today.

IL: In college, you double-majored in business and psychology. What drew you to transportation and logistics?

I was a good student, and the head of the psychology department encouraged me to go to graduate school. But I needed to make a living. I had a lot of student debt as well as other things to pay for. Schneider was recruiting on campus, and since my father owned a small trucking company—fewer than 10 trucks—I knew something about that industry. In my first job at Schneider, I was responsible for a segment of the maintenance and equipment operations. Ultimately, I became responsible for all of it.

IL: What's one early experience that shaped you as a leader?

I joined the transportation industry in 1980, the year Ronald Reagan deregulated trucking. It was a time of massive change and difficult transformation, a defining moment for the industry. As a young college graduate, I was a long way from senior leadership. But I observed the process and learned a great deal about how the senior leader sets direction, creates the context for change, and leads an organization through a transformation.

IL: What qualities make you good at your job?

We as an organization, and I personally, always focus on our clients and on how to deliver distinguished value and service. My role involves taking the vision and turning it into reality, building capabilities and end-to-end processes. I have a great deal of passion. And, probably most importantly, I have the tenacity to stay at something and make it happen.

For example, back in our startup days, Craig Dickman and I would go on sales calls to major organizations. People would ask Craig all kinds of questions: Can you do this? Can you do that? I would compile a list of all the things he had committed to, things we had thought about but could not do yet. Then my role was to figure out how to do those things. We always had a few months between getting a commitment and going live. Now that we had committed to those things, we had to figure out how to build the capability.

IL: What are your customers worried about these days, and how do you help with those issues?

Given the strength of the economy right now, everyone is worried about getting enough capacity. But that issue comes and goes over time. The bigger concern is we're on the cusp of dramatic change in this industry. For a long time, the supply chain has been powered by diesel fuel. That will certainly change over the next 10 years, if not sooner. Renewable gases, electricity, and hydrogen will all come into play, as will autonomous vehicles. And shipping patterns are changing: Cycle times are shorter, and even huge companies are often shipping in smaller quantities. Our clients look to us to help them understand the implications of all these changes.

One way we provide help is through our annual user group meeting, where we bring people together to advance the practice of energy management and all things related to transportation. We also provide a monthly advisory on the energy markets and support that with an interactive webcast.

IL: What's the biggest curveball a customer has thrown you, and how did you handle it?

Four years ago, a client asked us to go to Jakarta, Indonesia, to speak to that company's global supply chain organization. We went there and talked about energy management. Then they asked us to do the same in all parts of the world. We understood the issues in the United States and Canada very well, but that was about it. So, we dug in and did a tremendous amount of research. Now, we manage energy for this client in more than 40 countries throughout Europe, Asia, and North America, bringing visibility to actual cost, consumption, taxes, and emissions.

IL: Have you had a mentor or role model?

For about seven years, starting in the late 1990s, I was responsible for process and business transformation at Schneider. During that time, I spent a lot of time with Michael Hammer, author of Reengineering the Corporation: A Manifesto for Business Revolution. I attended a number of his classes, I became part of his advisory group, and we wrote some articles together. He was an incredibly brilliant and insightful business person who deconstructed business down to the core questions of how you deliver end-to-end value. I gained tremendous insight from that.

IL: How do you like to spend your time outside work?

I enjoy spending time with my wife and our grown kids, and with friends. I'm on the board of our local United Way and also on the board of The Automobile Gallery, which promotes classic cars as art. I own a few classic cars and have restored a couple, including a 1965 Mustang convertible.

As the new CEO of Breakthrough Fuel, Doug Mueller has had to adjust his leadership focus. "All my life, I've been hands-on, getting a sense of accomplishment from doing things, solving problems," he says. "Now my role is less about that and more about creating the context. It's not so much about what I accomplish, but about valuing the accomplishments of the leaders on my team."

It's like becoming a head coach in the NFL, Mueller says: Suddenly, you're not actually coaching, because your assistant coaches do that job. "My role now is about setting direction, reinforcing, and making sure we have the people, processes, and technology to move toward our goals."