From the Service to the Supply Chain 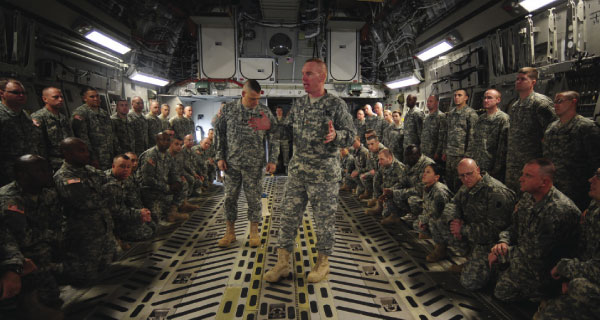 Can you really model best practices from the military? After all, they invented the acronym SNAFU. But companies are finding veterans' experience and skills help promote ship-shape supply chains.

The phrase, "Your best bet, hire a vet" still resonates with many hiring managers and human resources departments. Today, momentum is positive in the overall job market for military veterans.

Fifty-six percent of employers surveyed by Atlanta-based recruiter Lucas Group in early 2010 said they plan to hire new employees during the next six months. That is good news for the military veterans in Lucas' talent pool, who are increasingly in demand.

"March 2010 was the first month since September 2008 when we placed more military veterans than the same month in the previous year," says Bryan Zawikowski, vice president of Lucas' military transition division.

"When companies hire a veteran, they get one of the brightest minds in the country, someone who has received the best leadership training available and applied that knowledge in severe environments and stressful situations," says Mike Katzorke, principal of Phoenix-based Bryce Consulting Group, which has hired or placed a number of former military personnel in logistics and supply chain jobs.

The scope and scale of military operations provide its officers with logistics experiences not found anywhere else. For example, Mike McAllister, Indiana National Guard veteran and driver sales representative for Con-way Freight, has been deployed with infantry units setting up contingency operations bases. These military facilities comprise municipal solid waste operations and water systems, and maintain a police department. "It's like running a city of 7,500 people," McAllister says.

Through this type of intense and unique military experience, veterans gain leadership skills and knowledge that help them excel in their civilian roles. Here's a look at some of the military tactics veterans can bring to their private sector logistics jobs.

In our grandfathers' day, the military famously put mechanics to work as cooks and cooks as mechanics. Adaptability and creativity are still essential traits for enlisted men and women serving as logisticians.

Military logisticians are often better at thinking outside the box than their civilian counterparts, who may be forced to adhere to accepted business methods, adds Gould, a former automotive logistics executive, Marine reservist, and Iraq War veteran. "If it accomplishes the mission, an unorthodox approach in the military is tolerated—and, in some cases, rewarded," he says.

Military logisticians are highly trained at doing whatever it takes to accumulate the data necessary to set an effective strategy for a specific assignment, then executing that plan—even in extreme settings and circumstances.

Best practices in military logistics aren't about warehouse management systems or load optimization processes, according to Roger Kallock, a private sector executive who was tapped to become the U.S. government's Deputy Undersecretary of Defense for Logistics. The key to success in the military, he says, is "a passion for getting things done."

Kallock has witnessed military logistics in action—from the most senior and strategic levels down to serving individual soldiers in battle. Despite the differences between career active-duty military and junior officers, they all share a core value: a sense of mission.

Because a mission's success depends on joint effort, military leaders and individual service members are trained to work together, resulting in less parochialism by function, says Kallock. This is reflected in the private sector when strategic goals are clearly defined and widely communicated.

The private sector may have an advantage because it is an environment that carries less risk than the armed forces, but military officers are accustomed to a sense of urgency that drives action—and they are trained to act.

Focusing on the needs of the customer isn't a foreign concept to military logistics leaders. It comes not only from a sense of mission, but also a clear vision of strategic goals. Recent military missions have been in battle or disaster relief and, in both cases, the "customers"—individuals at the end of the supply chain—are at risk if the system fails.

"The penalty for failure in the civilian world is typically cost," says Gould. But cost is secondary when lives are at stake.

This attention to customer needs translates to a service orientation in the corporate world.

There's a misconception that military leaders are strictly authoritarian, but, in fact, they are excellent at collaborative team building in the face of a future threat, says Katzorke. Both leadership and collaborative skills are needed, he explains, because service members will only follow a leader they respect.

"Good leadership is not about management style," says Katzorke. "It's about adapting that style to fit the current situation."

An authoritative style of leadership can be appropriate in a corporate environment where situations are constantly changing and quick action is needed. But a leader in the private sector also has to employ collaborative team building to keep the organization focused on reaching its long-term strategic and financial goals.

"Military-trained leaders can develop a vision for meeting big-picture goals, and help their subordinates learn to manage near-term issues," says Katzorke. "Once they are trained, these workers will adapt to solving immediate issues almost autonomously."

Veterans also excel at establishing a feedback loop to stay linked to and communicate with corporate management. By contrast, Katzorke says, managers who don't have the type of training military officers receive may rely too heavily on higher-ups to make decisions or, conversely, be too inclined to act without their superiors' approval.

Maintaining the big-picture focus helps former military officers lead effectively and get the organization to work together as a team.

Kallock helped engineer a similarly focused change management initiative at the Department of Defense, designed to get people thinking about how their work affects and supports individual soldiers.

As a full-time active duty officer and career member of the National Guard, Mike McAllister, a driver sales representative for Con-way Freight, learned the discipline and leadership qualities involved in taking charge. He developed skills in various specialties over the years, but, in the end, he returns to the core Army values: loyalty, duty, respect, selfless service, honor, integrity, and personal courage.

It is these character traits that best equip veterans to succeed and inspire excellence in corporate supply chain management.

Many companies are increasing their support for service member employees and their families during deployments and after their return to civilian life, benefiting active-duty service members who choose to serve in the military full-time.

One such company is LTL carrier Con-way Freight. One employee, driver sales representative Mike McAllister, chose to recognize his company's effort by nominating it for a Department of Defense Employer Support Freedom Award. When not working at Con-way, McAllister serves as a sergeant major in the Indiana National Guard. An active-duty Army veteran, McAllister returned to civilian life, then joined the National Guard, giving him a perspective on all three sides.

It isn't just what Con-way does that impressed McAllister and led him to nominate his employer for the award; it was the change he saw take place at the company. During his first deployment in 2003, McAllister and his family received a two-week extension of his benefits. By 2004, the company had reviewed its policy and the needs of its citizen soldiers and extended benefits to one year.

"When you are deployed, your partner becomes a single parent," McAllister says. "The impact on the family is dramatic." Simple things become more complex, so it helps to retain company benefits and, for example, be able to continue seeing the family doctor.

Another Con-way effort McAllister found helpful during his deployment was the company's ongoing communication. Corporate newsletters and other types of information kept him current on company happenings, such as new policies or changes that would affect him when he returned to his job. This helped smooth his transition to the corporate world.

McAllister also appreciates Con-way's efforts in helping service members connect by notifying them when a new active-duty service member or veteran is joining the company or returning from deployment. Talking to someone with a similar background helps new employees acclimate and feel like part of the team.

When McAllister returned from duty, he received a welcome-home packet from Con-way and a phone call from the company president thanking him for his service. By nominating Con-way for the Department of Defense Employer Support Freedom Award, he was able to return the thanks.

A strategic decision to tap military veterans for tactical-level logistics jobs can prove beneficial to private-sector companies. A number of government incentives reward companies for hiring veterans, especially those who are service-disabled.

One example is Houston-based third-party logistics provider Big Dog Logistics, which has partnered with non-profit corporation the Southeast Vocational Alliance (SVA), Houston, to help veterans get their civilian careers on track by training them for various logistics jobs.

"This program is a prime example of moving beyond the rhetoric and actually giving back to veterans and veterans with disabilities," says Kirk Lane, president of Big Dog Group.

With support from Big Dog, SVA formed SVA Logistics, a full-service transportation brokerage. The company sub-contracts with San Mateo, Calif.-based Menlo Worldwide Logistics under the Defense Transportation Cooperative Initiative to arrange freight movement throughout the contiguous United States. SVA Logistics is also an approved carrier of the Surface Deployment Distribution Command; contracts with the Department of Veterans Affairs to provide logistics services and training; performs courier services for the Department of Homeland Security; and handles oversize shipments for the 842nd Battle Command through the Port of Beaumont, Texas.

SVA has been providing training to veterans in other areas for eight years and added logistics training a few years ago, explains Nathaniel Rido, CEO of SVA. Recently, the organization received an American Recovery and Revitalization grant to train veterans for logistics jobs. Big Dog provides the logistics knowledge base and the technology, which most non-profit groups training veterans and disabled workers can't afford on their own.

While some veterans bring logistics knowledge to the SVA Logistics program, others haven't worked in an office and need to be trained in "Business 101," Lane says. In addition to computer basics, veterans enrolled in the program learn how to use Big Dog's ShipTech transportation software solution, which provides experience they can adapt to other software systems in other companies. "But most of the real training is on the job," notes Rido.

Among the strengths veteran trainees bring to the workplace are a strong work ethic, the ability to stay on task, and "a willingness to commit to an assignment and not give up," says Rido. Veterans receive disability pensions to supplement their earnings, not replace the need to work.

For Big Dog, the commitment to train and hire service-disabled veterans has paid off—helping expand its business and thus maintaining jobs for the veterans it hires. One of Big Dog's goals is to set up veterans as franchisees with Big Dog knowledge and tools, and have them handle private sector business from Big Dog while developing local, state, and federal contracts specifically targeted for veteran-owned and service-disabled-veteran-owned businesses.