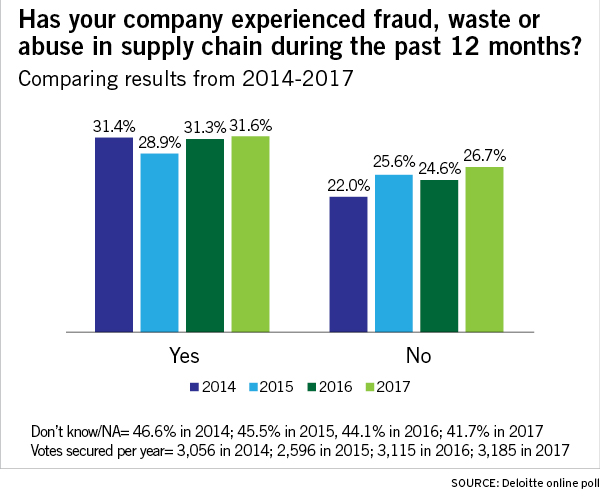 The use of analytics to mitigate third-party supply chain fraud, waste, and abuse risk jumped to 35 percent in 2017 from 25.2 percent in 2014,according to a Deloitte poll. Between 2014 and 2017, an average of 30.8 percent of poll respondents report at least one instance of supply chain fraud, waste, and abuse in the preceding year. However, some industries saw higher and lower rates of financial abuse.

For the third time in four years, consumer and industrial products professionals report the highest level of supply chain abuse for the past 12 months (39.1 percent), a slight decline from 2016 (39.6 percent).Energy and resources (34.7 percent) respondents also report a higher-than-average rate of financial abuse in 2017, dropping a bit from 2016 (35.9 percent).Life sciences and healthcare professionals note a marked decline in 2017 (26.3 percent) from 2016 (36.9 percent).

Related Articles
Defending Your Supply Chain Against HackersTrends—December 2016Export Control Reform Strikes AgainHow Secure Is Your Air and Ocean Cargo?Perfect Security by 2025?Protect Your Cargo With Vehicle TrackingIs Your Business Prepared for the Worst?Serialization: It's the Real ThingWhat Trends are Shaping the Global Air Freight Market?Use Supply Chain Modeling to Mitigate Port Shutdowns and Other Risks More related articles...