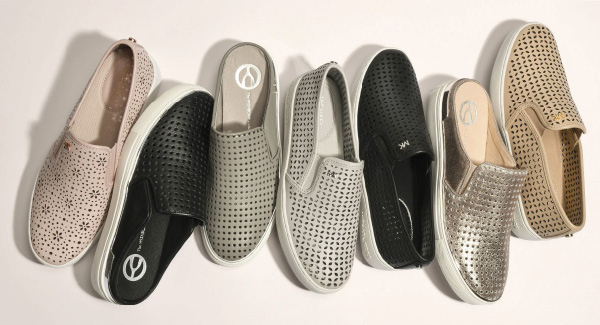 Browns Shoes, an independent footwear chain in North America, does not flip-flop when it comes to its main objective: to provide exceptional customer service online and at all its stores. To meet this goal, Browns needs to quickly access all its products, whether they're on store shelves or inventoried at its distribution center. But its deep product selection makes it impractical to maintain complete inventories at each location.

The Browns team considered various distributed order management (DOM) solutions, looking for one with real-time inventory visibility across all locations, enhanced hub-and-spoke operational capabilities, the ability to quickly process orders from any source, and to consolidate orders.

A DOM solution from Ontario-based OrderDynamics met these requirements. Among other results, it has allowed Browns to reduce order lead time and to more quickly fill e-commerce orders.

Montreal-based Browns Shoes operates a growing e-commerce business and more than 60 retail locations across Canada. It sells footwear from top designers, with brands ranging from Alberto Guardiani to Y-3.

In 2013, Browns' management team "knew we needed to become more efficient in our distribution and operations," says Alexandre Hubert, director, supply chain and logistics. A first step was to construct a new distribution center that spans 75,000 square feet and employs more than 60 robots that fill online and store orders.

In 2015, Browns stepped up its game by implementing an Order, Sorter and Retrieval (OSR) system that helped it fill e-commerce orders more efficiently. This was "step number one in our journey to omnichannel retail," Hubert says.

The next step was to implement a DOM system that would help Browns employees know—in real time—what items were available for purchase, whether in a store or in the DC. At the time, Browns lacked visibility to inventory across the company. To limit the risk of out-of-stocks, the company often carried large safety stocks, which increased costs.

In addition, Browns had no efficient way to identify the optimal location from which to fulfill and ship online orders, as the processes in place were "extremely manual," Hubert says.

For instance, employees might identify a store that carried a specific pair of shoes. They would ask the store to transfer the goods to the DC, where orders were manually consolidated and then shipped to the consumer. "The goal was to make those processes much more efficient," he says.

Hubert and his colleagues evaluated a number of DOM vendors. Initially, it seemed only a few large, expensive systems could handle its key requirements: automating order consolidation, or the ability to bring together several items in an order so they could move as one shipment. Browns decided these systems weren't feasible options because of their complexity and the investment required.

Enter OrderDynamics' DOM solution, which offers inventory visibility across all channels.OrderDynamics was willing to make the investment necessary to add order consolidation capabilities.

"If there's a feature we think other customers can use, we'll put it into the roadmap," says Charles Dimov, vice president, marketing with OrderDynamics. Order consolidation capability was one such feature.

OrderDynamics offers cloud-based, out-of-the-box distributed order management technology. Many of its clients are retailers with an e-commerce presence and about 25 or more locations, although the company also works with consumer brands and online-only retailers.

Browns had a "clear idea" of its objectives and of how the solution would fit into its daily operations, Hubert says. In addition to identifying the desired end results, Browns knew it had to integrate new and existing technology systems for a successful implementation.

In total, the OrderDynamics implementation required more than 50 integrations, says Varsha Mistry, vice president of professional services with OrderDynamics. The DOM integrated with Browns' e-commerce platform and ERP, as well as its warehouse management and point-of-sale systems.

A distributed order management system is the "master brain " that connects to Browns' other technology systems to create a "complete, seamless solution," Mistry says.

The first phase, which is now complete, focused on Browns' e-commerce orders. They all flow through OrderDynamics, Hubert says.

With OrderDynamics' built-in logic, if one store is not capable of fulfilling a specific order, Browns can ask another store to fill it. "This has cut fulfillment time significantly," he adds.

Also key are the consolidation capabilities OrderDynamics offers. If Browns ships several products from its stores to one customer, it's likely that not every store will have all the items.

Rather than send multiple packages, it's typically more economical to bring all the products to one location and ship them together from there. "The last-mile shipment is much more expensive than internal shipments, or the 'milk runs' between stores and the distribution center," Dimov says.

OrderDynamics also incorporates business rules that a retailer can easily adjust. For instance, at the beginning of a fashion season, a retailer may want to ship online orders from its DC. Toward the end of the season, the retailer may decide to ship from its stores in order to reduce the number of markdowns. A moderately tech-savvy system administrator can handle this change, without requiring assistance from a systems expert.

The next phase, which should be completely deployed late in 2018, will be to flow Browns' omnichannel orders through OrderDynamics.

Say a customer is in a Toronto store, and she doesn't find the shoes she wants. The system will use several criteria, such as the required delivery time frame, the shipping services available, and the price of the items to determine which shoe styles located in other stores to show her.

"We can virtualize our inventory in a way that maximizes what we show to customers, but also makes sure that we will still be profitable," Hubert says. That is, the system won't show shoes that are too far away to be delivered within the customer's time frame and at a reasonable cost.

Once the customer decides on a shoe, the sales associate can place the order. OrderDynamics will orchestrate the shipment's movement to its final destination.

With the OrderDynamics system, Hubert envisions being able to select specific stores in each region to act as hubs that fill orders for that region.

The hubs will be larger locations where store inventory is used to fill orders. The spoke stores will feed inventory to the hub when needed. "As retail space for grade A and B malls continues to be more expensive, inventory in these locations has to be tight," Hubert explains.

Browns, OrderDynamics, and OSF began working together in March 2017, and the system went live in late October. The timing was a risk, as the holiday season was quickly coming up. But the risk paid off. Browns saw efficiency improvements from the beginning.

Within the first month, Browns reduced its lead time—the time from when a customer places an order until it's shipped—by 11 percent. Lead time continues to shrink, Hubert adds.

Browns also can now meet express order expectations about 99.5 percent of the time. Previously, if the shoes a customer wanted were in another store, Browns would have to bring the shoes to the DC and then ship from there.

And because all Browns' information systems are integrated, every step of an
order is tracked. "We're able to nail down the areas where we need to improve," Hubert notes.

With the help of OrderDynamics, Browns Shoes can step into the future, and tap into the promise of e-commerce with confidence.

Related Articles
How 3PL Warehouses Can Capitalize on the Escalating Demands of Prospects and CustomersWalmart’s ShippingPass Has Ended. What Retailers Should Do Next.Download the Inbound Logistics Planner App TodayOmni-Channel Retail: Roadmap To ProfitShaking Up the Brown Box: Big Winners in Supply Chain EvolutionSolving the E-Commerce PuzzleRethinking Reverse Logistics for Online Apparel ReturnsTackling Retail Logistics: Build Your Team FirstThe Who, What, When, and Why of Warehouse WearablesGOOD QUESTION | What logistics concerns keep you up at night? More related articles...