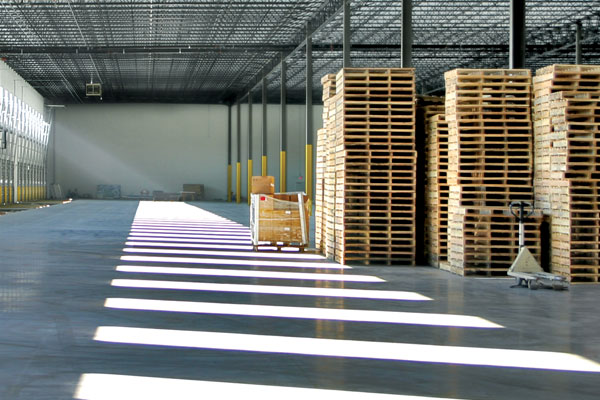 Their presence is unremarkable: T5 lamps that suddenly flicker to life in a dark warehouse aisle; unassuming flora encroaching on parking spaces; the color and texture of a truck court’s pavement. But the common sense economies that come with energy-efficient warehousing innovations— inside the four walls and beyond the dock— are becoming as transparent as the natural light flooding through clerestory windows.

Industrial property developers, such as San Francisco-based AMB Property Corporation, are digging into new real estate sites and retrofitting existing locations with the U.S. Green Building Council’s Leadership in Energy and Environmental Design (LEED) certifications in mind. As a result, manufacturers are finding efficiencies and cost savings in places they never considered before.

Here’s one example: In September 2008, Dorel Juvenile Group, a Foxboro, Mass., manufacturer and distributor of children’s products such as car seats, strollers, and high chairs, partnered with AMB to lease 150,000 square feet of space at a distribution facility in Bloomingdale, Ga., 11 miles from the Port of Savannah.

Dorel selected the Bloomingdale location as its new gateway into the booming Southeast market, and to complement its existing West Coast distribution network. Serving leading retailers including Walmart, The Home Depot, Lowe’s, and Best Buy, the Savannah area presents an optimal location for receiving and redistributing product into one of the United States’ fastest-growing consumer populations.

AMB’s 347,000-square-foot Building 100 in Bloomingdale is also the first speculative industrial development in the southeastern United States built to the LEED Gold Standard. When completed, the developer’s master-planned business park will feature four facilities that total 3.3 million square feet of LEED-certified distribution space. For retail customers such as Dorel, supply chain sustainability compliance is becoming part of the decision-making process and a topic of discussion before entering into industrial property contracts.

“About four years ago, many companies created a huge drive to be more sustainable, which led to a push toward LEED certification,” says John Morgan, vice president of development, AMB Property Corporation. “So we decided to spec out a LEED facility in Savannah. We were already building and developing properties to a high sustainability level, so following LEED requirements made sense. It was also cost efficient— only an extra five-percent investment.”

Building 100 near the Port of Savannah is the culmination of that vision and serves as a road map for future development within this business park and elsewhere. It is also a burning platform for tenants such as Dorel that are embarking on a long-term pursuit of energy-efficient facilities.

To get a feel for how businesses can benefit from greener warehouses both operationally and economically, Inbound Logistics tagged along with AMB’s Morgan for a virtual tour of Building 100— and a look into why many companies are prioritizing LEED requirements in their site selection decisions.

“Location never grows old,” says Morgan. There are always opportunities to find efficiencies elsewhere, such as exploring better tax incentives, and optimizing distribution networks by matching supply more closely to demand. As much as LEED innovations begin and end around the warehouse, the location of facilities is just as important.

Many goods that arrive at a port are consumed locally, so shipping them out of the city, then bringing them back, is inefficient. Although Savannah is not as large or as densely populated as, for example, the Los Angeles Basin area, AMB’s facility is located near the port and has direct transportation links to Atlanta and other regional population centers.

From a developer perspective, another important factor in LEED site selection is being able to source regional construction materials— thereby rationalizing costs and carbon outputs during the construction phase.

“Industrial buildings are composed primarily of concrete and steel,” Morgan notes. “Sourcing these heavy, bulk materials from nearby areas helps increase reliability and speed transport time, and is generally more economical because materials are being trucked over shorter distances.

“They are also handled less than a product coming from thousands of miles away, which reduces the likelihood of damage and delays,” he adds.

Moreover, developers often favor using local contractors and suppliers because it helps build partnership within the community, although this isn’t measured by LEED.

Inside and outside the distribution facility, LEED innovations are all about efficiently managing consumption, which often means recapturing energy and eliminating waste. With T5 aisle lighting equipment, for example, each fixture is attached to a motion sensor so that lights are only on when there is activity. AMB also uses large clerestory windows in and around loading docks to capitalize on ambient sunlight.

In Savannah, summer heat can present a considerable challenge when trying to reduce cooling costs. Building 100 was originally constructed with a Thermoplastic Olefin roof— a white-colored single-ply roof system— that deflects radiant heat. The evolution of thermoplastic surfaces and equivalent products continues to neutralize heating and cooling costs.

In truck courts with heavy volumes of freight movement, using concrete instead of asphalt also eliminates associated maintenance costs, explains Morgan. A high number of truck turns chews up asphalt. The cost difference between asphalt and concrete is generally market-driven, depending on diesel and cement prices. But it can be a long-term cost differentiator.

Using an erosion control pond at the edge of the pavement helps collect debris in the bottom over time— eliminating potential groundwater pollutants and any harmful impact on local ecosystems. In other green sites, permeable driveways and parking lots achieve the same objective.

Apart from providing shade and lowering surface and air temperatures, trees and vegetation also play an important role in enhancing aesthetics and reducing water consumption. Some flora species, such as palm trees, require little irrigation and are pleasing to the eye.

“Palm trees don’t grow naturally in Savannah,” observes Morgan. “So the question is, how can we present an aesthetic look and use sustainable indigenous landscaping?”

Consequently, it’s critical for developers to purpose landscape irrigation for a specific facility. AMB used drought-tolerant native plants outside Building 100 and water-efficient plumbing fixtures inside to help reduce water usage by 67 percent. This savings equates to two million gallons annually, enough to provide drinking water for the city of Bloomingdale’s 2,700 residents for more than three years.

“The irrigation plan is a measurable sustainability initiative,” explains Morgan. “All we had to do was provide a watering program to get the plants established.”

In Georgia, where water economy and usage is a critical issue, landscaping upkeep can be expensive. Every time users consume 300 gallons of water, they pay an additional Equivalent Residential Unit— a unit of measure that serves as an index to compare runoff generated by different size properties, then allocate overage charges.

One advantage of LEED strategies that is often overlooked is the impact on people who work in a building. Developing green distribution facilities can greatly improve employee morale.

“A typical warehouse building attracts a high concentration of employees by dock doors, where they load and unload shipments,” says Morgan. “We use clerestory windows that shine natural light in these areas. They provide a striking contrast to artificial lighting.”

While it is difficult to quantify worker morale, the costs associated with high turnover and training are considerable. By Morgan’s estimate, companies can save five percent in operational expenses simply by guaranteeing employee retention.

How To Take The LEED

Over time, AMB’s investments in Building 100 will cover a fraction of the savings that tenants recoup by using its facility. Along with sensor-controlled lighting, HVAC systems, and external cooling and drainage efforts, customers are projected to save nearly $100,000 annually in energy costs alone.

Whether companies are looking to invest in and build their own distribution center, lease or purchase an existing facility and make necessary renovations, partner with a developer to design and build a new warehouse for lease, or outsource to a third-party logistics provider, specifying LEED credentials can have a major impact on the bottom line.

Going Green, One Step at a Time

AMB Property’s Building 100 in Georgia is the first speculative industrial development in the southeastern United States built to the LEED Gold Standard. Among the financial and environmental benefits: