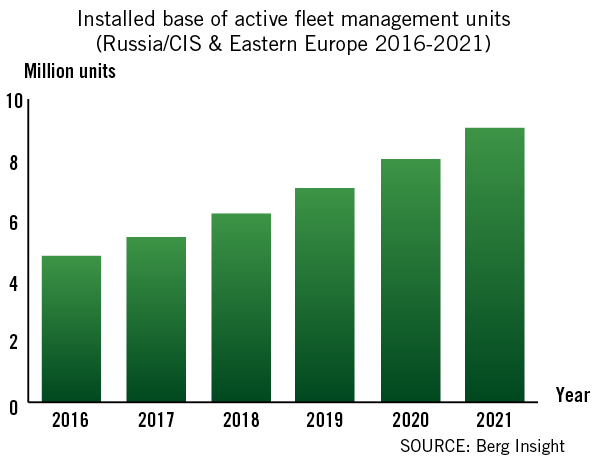 The number of active fleet management systems deployed in commercial vehicle fleets in Russia/CIS and Eastern Europe was 4.8 million during the fourth quarter of 2016, according to a new report from analyst firm Berg Insight (see chart, right). Growing at a compound annual growth rate (CAGR) of 13.5 percent, this number is expected to reach 9.1 million by 2021.

The Russian market alone accounts for a significant share of the region's total installed base and is forecasted to grow from 2.1 million active units at the end of 2016 to 3.5 million units by 2021. The top 15 providers of fleet management solutions for commercial vehicles across Russia, the rest of the CIS and Eastern Europe together have a combined installed base of more than 2.6 million active units in the region and approximately half of the market is evenly represented by the top 10 players.

The leading fleet management solution providers in terms of installed base in the CIS and Eastern Europe include diverse players from a number of countries. "Belarus-based Gurtam is the leading fleet management software provider, focused on software, providing a hardware-agnostic tracking platform offering compatibility with over 1,300 different device models from hundreds of third-party hardware manufacturers," says Rickard Andersson, senior analyst, Berg Insight.

"Arvento Mobile Systems from Turkey and TechnoKom based in Russia are the first and second runners-up, followed by Turkish Mobiliz and Russian players NIS, SCOUT, and Navigator Group," Andersson says.

Additional top 15 players include Russia-based Omnicomm, which has approximately 100,000 active fleet management units, as well as Infotech in Turkey, Fort Telecom and SpaceTeam in Russia, the European market leader TomTom Telematics, Princip in the Czech Republic, the major truck OEM Scania and Secret Control, which is based in Hungary.

"With the exception of TomTom Telematics and Scania, the major international solution providers based in Western Europe, North America, or South Africa are yet to reach the top 15 list for this region," Andersson notes.