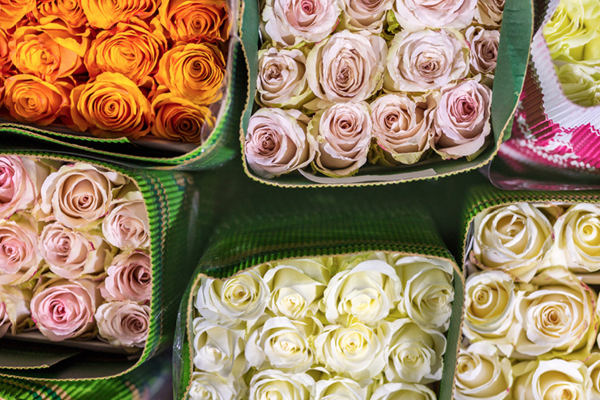 The complex art of floral logistics involves a delicate arrangement of proper packaging, refrigeration, and speed.

Don't let flowers fool you. The blooms in a bride's bouquet are delicate, but flowers drive a muscular industry, generating about $8.5 billion worldwide each year, according to Bloomberg Businessweek.

Flowers are also hardy travelers, often crossing oceans on the journey from farm to florist shop. As perishable items, though, flowers require careful handling as they move.

Most flowers sold in the United States come from Colombia or Ecuador. "Hundreds of growers in those countries ship their products to Miami, which is the hub for fresh-cut flowers," says David Armellini, president of Armellini Logistics, a refrigerated trucking company based in Palm City, Florida, and the largest transporter of flowers in the United States.

Many of those blooms reach the United States on aircrafts, although some make the trip in refrigerated ocean containers. From Miami, Armellini and other trucking companies rush orders to customers, including regional wholesalers, supermarket chains, and mass-market retailers.

California is the biggest domestic source of cut flowers. For example, Ocean Breeze Farms in Carpinteria, California, sells to retail florists and mass-market chains throughout the country. Depending on the buyer's preference, those orders travel via truck, parcel carrier, or airline, says Micheal Furlong, sales manager at Ocean Breeze.

Proper packaging, refrigeration, and speed are all essential to the success of the flower supply chain. And the status flowers hold as must-have gifts for special holidays makes flower logistics an even tougher proposition.

Special handling starts at the farm as soon as a flower is cut. "We put the flower in water and let it hydrate for one hour or two," says Hugo Cruz, owner and president at Tutuli Flower Farms in Carlsbad, California.

Then the flower, still in water, goes into a cooler, where it goes dormant. "Depending on the flower, that gives us a week, or two weeks, to sell it," he says.

Cold storage lets Tutuli Flower Farms keep inventory on hand in case of an unexpected demand surge. "You don't know if there will be a huge wedding in two weeks," Cruz says.

Flowers cut at Ocean Breeze Farms stay in water during transportation to the central distribution center (DC) in Carpinteria. Outbound from there, product for customers in California remains in water buckets throughout the trip. The rest of the flowers travel in boxes.

"Some boxes have water cells in them," Furlong says. Those need to stay upright. Other boxes can be positioned as needed.

While line-haul truckers transport flowers in refrigerated trailers, refrigeration isn't feasible when parcel carriers make the deliveries. "We have to pack flowers to certain regions based on their particular weather issues, whether it be too cold or too hot," Furlong says.

Fresh from The Farm

Retailer 1-800-Flowers.com ships to consumers from its own facilities and offers same-day delivery through partnerships with independent florists. Customers who use its "Fresh From the Farm" service receive imported flowers directly from Miami.

Like Ocean Breeze, 1-800-Flowers.com pays special attention to weather and the cold chain. "We have done extensive research and testing on how floral varieties perform in different environments, and we customize our offerings to ensure customers receive high-quality product," says Mark Smith, senior vice president of operations at the company in Carle Place, New York.

"For example, if a certain flower is sensitive to heat, we may ship that flower only from September through May," he adds.

Trucking companies that serve 1-800-Flowers.com use nontoxic ethylene gas inhibitors in their refrigerated trailers; this helps extend the life of the stems.

Flowers from South America go into coolers at the farms and remain refrigerated most of the way to the buyer, with one big exception—while they're in the air.

"There are no coolers on planes," says Christine Boldt, executive vice president at the Association of Floral Importers of Florida (AFIF) in Doral, Florida. "But most of our product flies at night, when it's cooler." Landing in Miami, a plane rolls up close to a storage facility, where flowers move into coolers in less than five minutes.

On farms in mountainous Colombia and Ecuador, as growers pack flowers for shipment to the United States, they must account for differences between the cooler climate in those regions and the warmth of Miami, says Lorena Sandoval, director of cargo sales for Latin America, the Caribbean, and Eastern United States at American Airlines (AA) Cargo.

Many flowers that AA transports from South America stay in Miami for just a few hours, waiting in coolers or in shade outside the warehouse for connecting flights to Europe. In late October, for example, AA was busy transporting vast volumes of roses through Miami to Madrid for All Saints' Day on November 1.

Flowers can withstand flights without refrigeration because shippers pack them carefully. "Shippers don't load a lot of product in boxes, because they need to leave some air around the flowers," says Sandoval. "The boxes have holes so fresh air can circulate."

Growers also cut flowers at exactly the right time in their life cycle, aiming to keep them fresh even if the transit should take as long as 72 hours.

While air cargo is the norm for transporting most flowers from Colombia and Ecuador, several years ago some shippers added refrigerated ocean containers into the mix. That move provided much-needed capacity when demand for flowers was growing in the United States but air capacity was tight.

Ocean transportation poses its own challenges. Flowers are largely a just-in-time industry; retailers order product as they need it, and mass marketers change the "recipes" for bouquets and arrangements quite often, Boldt says. So switching to a slower transportation mode required a new mindset.

But ocean transport has advantages as well. Flowers loaded into refrigerated containers at the farms stay cool through the trip to the port and the ocean crossing. "It takes two weeks, compared to one and a half days, for the entire process to happen," says Gary Staton, director of procurement at Bill Doran Company, a flower wholesaler in Rockford, Illinois, with 18 regional locations. "But since they're under refrigeration, it's okay for flowers to ship that way."

"During holiday times—Valentine's Day and Mother's Day—ocean transport absolutely makes sense, because so much volume has to come to the United States," Boldt says.

Particularly for the one-day rose-buying frenzy on February 14, wholesalers and retailers order product in advance, and they have to store it somewhere, whether in a warehouse or at sea. "It makes sense for the flowers to go in a sea container," she says. "Then you don't have to worry about temperature fluctuations."

For trucking companies that transport flowers to U.S. wholesalers and mass-market retailers, speed is crucial. This isn't so much a race against flowers' biological clocks as a rush to meet market demand.

Customers throughout the United States generally want their product 24 to 36 hours after it leaves Miami. "If it leaves on Thursday, it's at the customer's door on Saturday morning," says Armellini.

While Armellini Logistics also hauls chilled products such as butter and cheese, flowers account for about 70% of its business. It provides truckload and less-than-truckload transportation for flowers out of Florida, California, Washington, and Oregon.

In Armellini's Miami warehouse, employees sort flowers received from different suppliers and assemble orders for different customers. "A typical wholesaler may buy from 30 different people, and they may get two or three boxes from each of those vendors," Armellini explains.

On the road, two-driver teams keep flowers moving nonstop. Thanks to an honor system, those drivers can serve customers even in the middle of the night. "We go in and turn off the alarm, open their doors, put the boxes inside their coolers, put the alarm back on, shut the door, and go to the next facility," Armellini says. A truck heading north from Florida averages 15 stops per run.

Wholesalers sell that inventory while it's still on the truck, if they haven't already sealed their deals in advance. "Our branches are aware of what's incoming, and are already setting up for arrival so the flowers can be sold to our customers as soon as possible," says Staton at Bill Doran.

The company buys a lot of its flowers directly from farms in South America but also relies on flower brokers in Miami to help meet unexpected demand. "So much of this business is last minute, and sometimes last second, that many brokers in Miami bring in product that is not presold to any wholesaler or florist, with the idea of being the last option," Staton says.

The logistics challenges grow even more intense in the lead-up to the biggest flower holidays, which in the United States are Valentine's Day and Mother's Day.

The big challenges of Valentine's Day arise from that holiday's focus on roses, especially red ones, and from the urgency of a one-day event, says Boldt. "On February 15, all that product is worth nothing." Mothers are more flexible than sweethearts; they don't care if those blooms arrive a few days early or late.

A failed Valentine's Day or Mother's Day could ruin a flower wholesaler's chance of making a profit for the entire year, he adds.

Besides calling all hands on deck, shippers can also succeed with the holiday surge by making preparations based on good business intelligence.

"After each peak holiday, including Valentine's Day, we conduct a comprehensive review and begin the planning process for next year," says Smith of 1-800-Flowers.com. "We also have a sophisticated supply chain with rich delivery data from our more than 40 years in the business. This allows us to effectively predict how many flowers to order, from which farms, and where they are expected to be shipping."

In the midst of the COVID-19 pandemic, Mother's Day 2020 proved especially tricky. For example, the need for social distancing made it hard for florists who work with 1-800-Flowers.com to staff up for surging demand.

"We asked our customers to order early and be flexible with delivery dates—giving our local florists the opportunity to deliver their arrangements throughout the week," says Smith. Customers responded well: 1-800-Flowers.com and its partners delivered about 21 million stems for Mother's Day.

The pandemic pushed the whole flower industry off-center at first. Farmers were struggling in the beginning because there were no people to cut the flowers.

And in the midst of a public health emergency and economic crisis, it was hard to imagine that people would keep buying something as ephemeral as flowers.

Yet, demand has persisted. "More people are at home, and they want something nice there," Sandoval says.

Industry players have modified their processes to fit this new situation. "Now that everything is settled," she adds, "we've adjusted to the new reality."

Where Have All the Flowers Gone?

Related Articles
Inventory Replenishment: Why Push When You Can Pull?Forecasting Seasonal Surges Keeps Products on the ShelfWhat to Expect and How to Prepare for Peak SeasonVertical Focus | Home ImprovementHow Can Recommerce Benefit Your Supply Chain?Dashing Through Soaring Holiday SalesVertical Focus | Sustainable FashionRetailers, Suppliers, and the Ties that BindRetail Gets Back to WorkFor the Love of Dog More related articles...