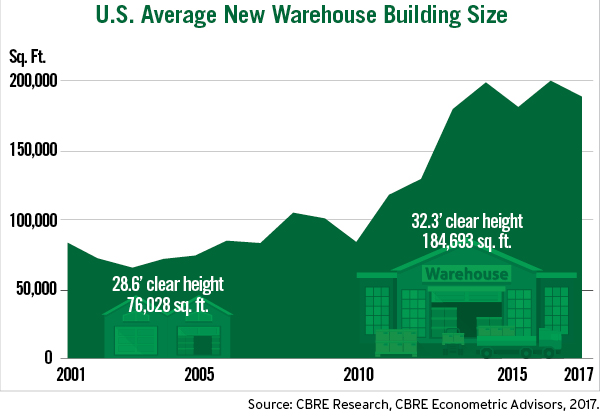 Thanks to e-commerce, the average footprint of warehouses built in the United States since the early 2000s has more than doubled. The largest expansions are in metro areas with the big populations that online sellers covet and the ample land that developers need, according to a new CBRE report.

The real estate firm analyzed the average size of warehouses built in the United States during the last development upswing from 2002 to 2007 and compared those figures to the current building period of 2012-2017. The average size increased by 143 percent in that span to 184,693 square feet and the average warehouse clear height rose by 3.7 feet, to 32.3 feet in total (see chart).

Chicago warehouse size increased roughly 134 percent in that time frame, with the average new building now at 283,366 square feet, up from 121,133 square feet.