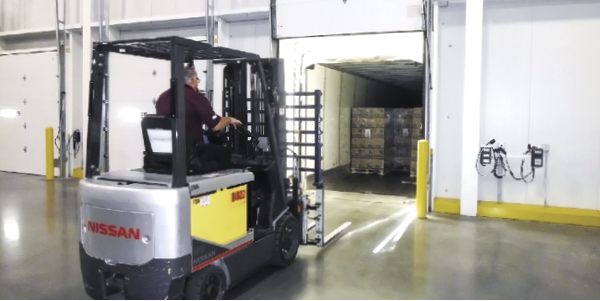 Any company would raise its glass to earning accolades and achieving substantial growth. Privately held beer distributor Crescent Crown Distributing LLC—nationally recognized among both suppliers and peers for its best practices and industry standards—has doubled in size over the past nine years, making it one of the United States' five largest beer distributors.

But as the company grew, delivery scheduling became a daily headache because trucks arrived without appointments. Scott Trotter, warehouse manager at Crescent Crown's Phoenix location, knew he needed an improved and more effective delivery management process. An online appointment scheduling tool would prove to be the answer.

Crescent Crown sells and delivers more than 26 million cases annually throughout its distribution territories in Arizona and Louisiana. With more than 500,000 square feet of combined space, the company's two Arizona facilities, located 45 miles apart, handle 16.5 million of those cases.

When the company was smaller, Crescent Crown controlled when deliveries arrived. But as the company grew, that task was handed over to suppliers and manufacturers, who often sent trucks to the distribution centers without scheduled delivery times. Delays frequently resulted, and long lines stretched outside the facility and down the street as up to 45 trucks attempted to make deliveries at once to each facility's 35 docks. And because the facility did not offer weekend delivery windows, enough trucks typically arrived on Monday morning to fill the yard.

"We lost control because we didn't have direct contact with delivery drivers," admits Trotter.

Crescent Crown accepted inbound trucks using a first-come, first-serve policy. When the distributor maintained control over deliveries, it typically scheduled 35 to 40 trucks daily. But when suppliers took over the scheduling process, as many as 65 to 75 trucks could arrive on a given day—up to 20 in one hour—and each spent about 45 minutes unloading.

As a result of the bottleneck, it was common for drivers to sit in their trucks for up to four hours waiting for their turn at the dock.

"We were exceeding our capabilities for unloading inbound product," says Trotter. "Even though we were unloading multiple trucks at once, just moving the vehicles in and out of the property created gridlock, because they were showing up all at once, blocking local businesses and major roadways."

Tapping Into a Solution

Some of Crescent Crown's suppliers suggested extending receiving hours, working weekends, or adding manpower to get a handle on the delivery schedule—all of which would represent extra costs for the distributor. Requesting that the suppliers do more to alleviate the congestion wasn't an option.

Taking steps to manage the problem led Trotter to Scottsdale, Ariz.-based Appointment-Plus (AP). He had heard about the company's Software-as-a-Service (SaaS) online scheduling software from a beer distributor at a tradeshow.

"I decided to go with AP during our first phone call, when I heard the price for one month of usage," he recalls. "The cost was so reasonable, it was worth paying upfront without first seeing the solution."

Depending on a business' support and scalability needs, Appointment-Plus offers several pricing options. For companies that operate a single facility or just a few docks, it offers a three-tiered monthly payment system: $39, $49, and $79. For larger operations with dozens or even hundreds of locations that need a highly scalable solution, AP offers an enterprise-level services suite that enables businesses to standardize scheduling processes across all inbound delivery sites.

Crescent Crown pays $49 monthly, with a discount for paying one year in advance. AP tacks on additional charges if a company makes more than 500 appointments in one month. Crescent Crown usually has to pay this nominal fee.

Getting to Know You

Crescent Crown worked with AP for one month to learn how the system works, the notifications it can create, and how to customize it. Meanwhile, Trotter sent letters to the distributor's suppliers and known carrier contacts, alerting them that they had 30 days to create an account with Appointment-Plus; at the end of the 30 days, no deliveries would be accepted without an appointment.

Trotter admits some suppliers were not pleased with the new scheduling system, finding it restrictive. But the majority were receptive because they were familiar with similar programs at other distribution sites.

"Drivers are given a specific timeframe to have their trucks unloaded, so everyone at the dock gets to plan their day more efficiently," says John Schminke, enterprise manager for Appointment-Plus. "That is very important for carriers when you consider detention times. They want to drop off their load and move on. If they're not on the road, they're not making money."

Using Appointment-Plus, Crescent Crown creates schedules that are specific to either the supplier or the type of delivery. Different appointment options are available to suppliers based on the delivery type they select.

"For instance, if they are delivering Crown beer, they choose the Crown beer delivery option," explains Trotter. "This limits the appointment times they can view, which lets me control how many trucks per day deliver that product.

"We control the movement across our 35 docks and create a flow, so we don't have 10 trucks trying to enter the first five docks, all delivering the same product," he adds. "Controlling dock traffic allows us to control the work inside the facility."

Each truck gets 30 minutes to unload. Because the system manages appointments in real time, Trotter has the flexibility to make adjustments quickly. For instance, if a piece of dock equipment breaks, he can shut down that dock, and the system won't allow anyone else to book time on it.

Before AP, the Crescent Crown purchasing department handled all communication with brokers and truckers.

"Implementing AP relieved the purchasing department of scheduling duties," says Trotter. "As a result, our purchasers gained back the two hours they lost daily dealing with carriers; now they can use that time to focus on purchasing."

"We now have easy access to every carrier's phone number and email, and can contact them directly if a problem occurs," Trotter says.

If necessary, Trotter can send a mass email to all the accounts, and create automated emails for individual carriers letting them know the arrival and departure status of their trucks.

Carriers receive automatic reminders via email about their scheduled appointments, and can log into the system to view Crescent Crown's hours of operation, contact information, and travel directions.

Despite a few deficiencies in reporting and record maintenance capabilities, Trotter believes implementing Appointment-Plus was a smart business decision.

"All parties in the supply chain want to optimize their time and maximize their efficiencies," Trotter says. "This appointment scheduling system lets us do exactly that for Crescent Crown, our suppliers, and the brokers and carriers we work with."