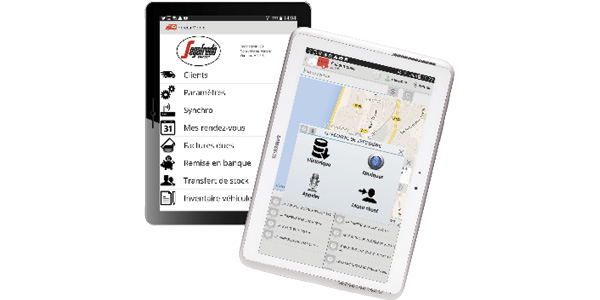 The legacy system had been in place for nine years. Salespeople and delivery drivers sold and distributed Italian coffee in bars, hotels, and restaurants all over France using Symbol PDA MC9094 devices connected to SAP Business One (SBO) back-office software. In 2015, approximately 4,000 customers received coffee shipments each week, delivered from Segafredo warehouses around the country.

But using the legacy system created many challenges for Segafredo's salespeople. "We knew we had to make the sellers' job easier, faster, and more interactive," says Jean-Francis Caharel, project director, Segafredo Zanetti France, a subsidiary of the Massimo Zanetti Beverage Group, an espresso producer with a presence in more than 100 countries. "We also needed new functions that we couldn't develop on the Symbol PDA because the operating system (OS) was old and did not have sufficient memory."

Another issue was the system's inability to synchronize data without transfering files. Salespeople and drivers spent too much time waiting to get and give information. And the sellers needed a solution that could provide information even when the system was offline or out of connection range.

"We needed more interactive data transfers," Caharel explains. "The old OS had reached the limits of available memory, and synchronizing data took too long. Our salesforce lost time to technical problems, and began to ask for new devices."

Segafredo's in-house, four-person IT team took on the task of determining how to address these issues. They sought a solution that would quickly and cost effectively integrate the company's back-office SBO software with an up-to-date mobile solution. Enter French mobile IT provider Danem.

Since 1996, Danem has been designing and marketing mobile solutions that integrate the relationships between a company's customers, field staff, and office. Danem currently supports more than 300 companies with about 10,000 end users in industries as diverse as food processing, construction, maintenance, and healthcare.

Segafredo considered four solution options before selecting Danem and Magic Software's integration platform, Magic xpi. One contender did not have a French integrator to work with. Segafredo rejected another system because it seemed too complex. And it passed on the third possibility because the solution was too expensive and time-consuming to integrate.

Magic and Danem had established a relationship on a previous project, and adding Segafredo into the blend went smoothly. "We worked with Danem as if they were colleagues," says Caharel. "The relationship was comfortable, agile, and efficient."

"System implementation time generally depends on integrating controls and extracting the necessary files from the back-end information system—for Segafredo it was SAP Business One, its enterprise resource planning system," says Michel Sasportas, managing director at Danem. "The contribution of Magic's experience and Magic xpi's real-time exchange capabilities from Business One to the mobile application was a crucial factor in implementation success."

"The Magic xpi integration platform takes care of all the difficult data transformations behind the scenes so developers can concentrate on creating the right business processes rather than on the technical complexities," Berger adds.

These ready-made connections made all the difference to the project's success and allowed Segafredo to meet its tight implementation deadline. Segafredo hired Danem in April 2015; the deadline for implementation was Nov. 30, 2015.

"We received a beta version in July," Caharel says. "We tested it with a local seller working near our administrative headquarters and a Parisian agent not far from Danem's office.

"Danem issued the final release in September, and by October three salespeople were working with the new solution."

Sasportas credits the project's efficiency to the close working relationship among the companies. "Following the project's implementation, and after a few months of production, not one end user needed a correction or reported negative feedback," Sasportas notes.

Segafredo also teamed up with Danem for salesforce training on the new system. Danem brought in the drivers and salesforce, took their old PDAs, synchronized one last time, and unplugged the PDA from the back-office system.

"It took one day to train each sales team on using both the Android tablet and the HORECA Mobile software," says Caharel. "The training was based on explanations and systematic individual testing. We let the sales staff produce a lot of documents and checked that each one knew how to use HORECA Mobile. At the end of each training day, we switched from test infrastructure to production infrastructure, and the new system was in place."

HORECA Mobile also provides benefits for both sales administration and back-office employees. The sales administrator no longer has to call the sales staff to ask them to synchronize their sales for the day. After a seller creates a sales document, it is automatically integrated into the back-office SBO. And because the data transfer is more fluid, the back-office staff has fewer communication issues and spends less time troubleshooting with the sales people.

The project also allowed Segafredo to keep hardware costs to a minimum. "Internally, we were able to keep the back-office software and the printers (Zebra RW420), which helped limit the initial investment," says Caharel. Associated costs were the tablets and protective cases for the sales force. The company will amortize the investment over several years.

The new system helps sellers with their daily grind. "With the new user-friendly devices, messaging software, and intranet access to statistics, sellers now have more functions than they ever thought they'd have," says Caharel.

Even customers have noticed a difference. The PDA that the salespeople used to carry seemed outdated. The new Android devices are sleeker and more in line with what people expect to see. And, because the new software is user friendly and back-office synchronization so fast, each transaction can take place much more quickly. This makes interacting with the salesforce more efficient for customers as well.

"We have already improved inventory visibility because HORECA Mobile is integrated with SBO," says Caharel. "We also foresee our sales representatives taking supply orders with HORECA Mobile, and being able to control the amount ordered to avoid overstocking. With inventory transactions being dynamically integrated in the back office, the new system doesn't limit us in terms of performance techniques."

Segafredo has seen increased sales now that sellers have the ability to accept impulse purchases, up-to-date inventory and sales data, greater operational efficiency, and improved customer service. "Our salesforce now has the ability to 'pre-complete' supply orders depending on the product stock calculated in the back office," adds Caharel.

Currently, Segafredo is only using the system in France. However, all the texts displayed by the HORECA Mobile Solution are stored in a resource file and would be easy to translate into other languages.

By November 2015, Segafredo's 40 salespeople were on the road with their new Android tablets connected to the new software. "Everything is easier and more comfortable," Caharel says. "The sellers have autonomy, communication, intuitive software, speed-printing, and messaging software they had not enjoyed before."

He expects to see additional benefits as the new app provides the necessary jolt to Segrafredo's retail sales and distribution processes.