Could Self-Driving Ships Become Reality by 2020? 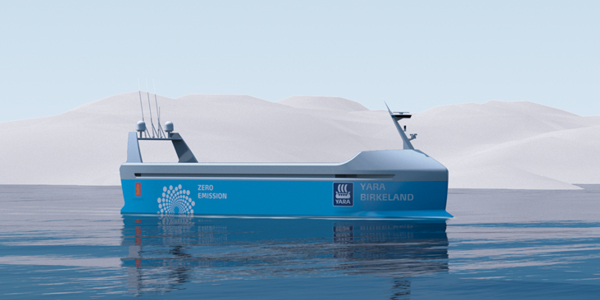 The Yara Birkeland will be the world's first fully electric and autonomous container ship, with zero emissions. Unmanned voyages are planned for 2020.

"This is happening. It's not if, it's when. The technologies needed to make remote and autonomous ships a reality exist."

So said Oskar Levander, vice president of innovation for Rolls Royce, at Amsterdam's Autonomous Ship Technology Symposium in 2016. He wasn't wrong about the technology, considering the United States and China already have unmanned naval ships patrolling the seas.

As it turns out, Rolls Royce isn't the only company trying to bring pilotless cargo ships to market. Fast forward to one year later and multiple shipbuilders are working to turn self-piloted freighters from concept to reality. Ocean shippers Mitsui O.S.K. Lines (MOL) and Nippon Yusen have teamed up with Japanese shipbuilder Japan Marine United, pledging to put unmanned ships on the water by 2025. MOL and Nippon Yusen agreed to split the several hundred-million-dollar development cost.

Meanwhile, in the Land Down Under, Australian mining company BHP Billiton Limited wants to develop cargo ships of its own to haul dry bulk materials between Australia and China.

"Safe and efficient autonomous vessels carrying BHP cargo, powered by BHP gas, is our vision for the future of dry bulk shipping," said Rashpal Bhatti, BHP's vice president of freight, in an announcement on the company's website. "We believe that future could manifest within a decade."

While BHP continues its search for partners to develop its own self-driving ships, Norwegian maritime technology firm Kongsberg Gruppen plans to begin testing its fully electric autonomous ship next year. The tech company partnered with fertilizer manufacturer Yara International to build the Yara Birkeland and get it on the water with a test crew by 2018, with unmanned voyages planned as soon as 2020.

"By moving container transport from land to sea, Yara Birkeland is the start of a major contribution to fulfilling national and international environmental impact goals. The new concept is also a giant step forward toward increased seaborne transportation in general," says Geir Håøy, president and CEO of Kongsberg, in a public statement. The Yara Birkeland will haul fertilizer up and down the Norwegian coast.

With so many trying to put ships in the water, it will be only a matter of time before we see autonomous vessels in common use. Ships driven by artificial intelligence and tracked using the Internet of Things could be the answer to many problems, such as lowering greenhouse gas emissions, reducing accidents at sea, and lowering operating costs for ocean shippers.