Canada and the United States: A Resilient Relationship 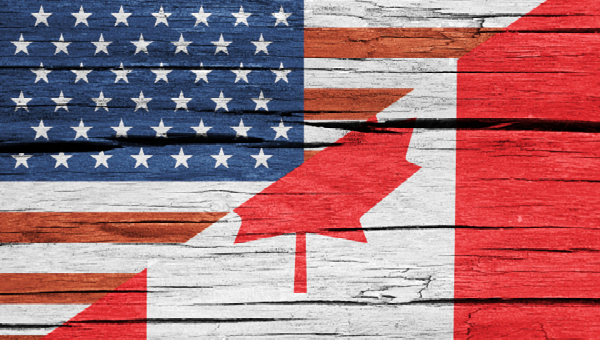 The United States and its northern neighbor remain trading partners with staying power.

Here's something important to keep in mind as U.S. and Canadian officials consider revisions to current trade policy: Despite the headlines and predictions, trade in goods between the two countries in 2018 to date is outpacing 2017 levels. And of particular interest to U.S. businesses, exports to Canada through April 2018 were more than 10 percent higher than during the same period last year.

"For many reasons, it's a great time to be engaged in cross-border trade," Costanzo says. "E-commerce is expanding in Canada at a double-digit rate, Canadian consumers continue to embrace U.S. goods, the border clearance process is highly automated. And, thanks to technology and innovation, it's possible to have goods reach the Canadian market faster than ever."

Purolator International is proud of its role in facilitating the growth of cross-border trade. The company maintains facilities in all major U.S.-Canadian trade markets, from which shipments benefit from direct access to the Canadian market, and often arrive in Canada days faster than most competitors' shipments.

The company is also the U.S. subsidiary of Ontario-based Purolator Inc., Canada's leading provider of integrated freight and parcel delivery services. That relationship allows Purolator International access to a comprehensive distribution network that ensures delivery throughout Canada, including to the country's more remote outer provinces and territories.

This "Canadian expertise" is an attribute unique to Purolator and something that can't be overstated, according to Costanzo. "Businesses that currently export to Canada realize that it's not simply an extension of the United States," he notes. "Shipments to Canada require a Canada-specific solution."

For one thing, Canada's comparatively small population of 36 million people occupies the world's third-largest geographic area. "It's as if the population of California was spread across the entire United States, with room to spare," Costanzo says.

While 80 percent of the population lives in urban areas, and 70 percent within 100 kilometers of the U.S. border, businesses must take special care to reach residents who are not as accessible. Businesses must also take into account that Canada is officially a bilingual country, with 20 percent of residents naming French as their first language. Canada's labeling laws, which require all information to be listed in both French and English, reflect this bilingualism.

Beyond these demographic differences, businesses must also be prepared for Canada's unique distribution practices. While U.S. businesses typically assume a carrier will be able to seamlessly deliver shipments throughout the United States, perhaps with exceptions for Hawaii and Alaska, the same is not true in Canada.

In fact, no U.S. carrier offers comprehensive coverage throughout Canada, and most Canadian carriers offer only regional service. This means a shipment often has to be handed off mid-route to a second carrier, and possibly to a third for last-mile delivery.

Purolator International is the exception, Costanzo says. Through its affiliation with Purolator Inc. and its partnership with Canada Post, Canada's national postal system, Purolator is able to offer seamless service to essentially every address in Canada.

"We have many U.S. customers that can meet Canadian inventory needs from DCs located in the United States," Costanzo says. "This is largely due to the direct service and speed with which Purolator is able to move product into Canada."

Those same trucks that move product to Canada are also available to move goods—often in the form of returns—back to the United States. Since returns account for an estimated nine percent of sales—a figure that can jump to as high as 30 percent for certain e-commerce sectors—U.S. businesses selling in Canada cannot overlook the need for a viable, efficient returns process.

"For years, product returns were an overlooked part of the supply chain, but businesses finally see their importance, especially with regard to building customer relationships," Costanzo says. "I'd like to think logistics efficiency played a role in that."

Looking ahead, he anticipates logistics will continue to be a driving force. This is especially true as consumers continue to expect faster and more flexible delivery from the businesses they interact with. This demand for improved last-mile service—not only to meet customer expectations, but also to exceed competitors' capabilities—will increase pressure on logistics companies to find ways to become more efficient and provide increasingly fast service.

"We are up to the challenge," Costanzo says. "We try to stay one step ahead of customer expectations, and are at the forefront of technology-based logistics solutions."

A strong logistics program is everything, he says, when it comes to succeeding in the Canadian market.

As any accountant will attest, numbers without context can be misleading. And when it comes to U.S.-Canadian trade issues, there certainly is nuance behind the numbers.

"Looking strictly at data, on the surface we would consider the trading relationship between the two countries to be healthy because there is near parity," says John Leach, CEO of Montreal-based FLS Transportation Services. "In 2017, the United States recorded a trade surplus of $8.4 billion on $673.9 billion of goods traded.

"However, take into account that many of the goods shipped to Canada from the United States actually originate from other countries," he adds. "The U.S.-origin trade numbers, reported by the United States, reflect a $17.5-billion, or 2.5-percent, trade deficit with Canada. That is still considered healthy, but could be improved upon."

Leach says he expects U.S. representatives to leverage those numbers during the ongoing NAFTA negotiations. However, he adds, importers and exporters alike are revealing some anxiety over how trade regulations will impact the profitability of their business and their customers' experience.

Reconsidering NAFTA, a 23-year-old trade agreement, along with the potential delay in a new agreement, has created minor uncertainty for those designing long-term trade strategy.

"The talks between the administrations, and the ensuing decisions, are critical to the future of Canadian companies, especially those engaged in the steel and aluminum markets, as well as the automotive industry," Leach says. "Currently, Canada exports almost 90 percent of its steel to the United States, which accounts for about 16 percent of all U.S. steel imports. It also accounts for 41 percent of U.S. aluminum imports.

"Whatever agreement is ultimately decided upon will have to address questions regarding how automotive commodities or other manufactured components cross, and perhaps re-cross, the border several times before they are delivered in a consumable product," he adds.

Leach views these issues from a broad perspective. FLS operates more than one dozen company-owned offices throughout Canada, the United States, and Mexico. As one of the fastest-growing third-party logistics providers, FLS provides logistics solutions for all sizes of companies across numerous industries.

The biggest difference between the U.S. and Canadian markets is the sheer magnitude of the U.S. market relative to the size of the population and consumption. More prolific than e-commerce in Canada—an estimated $20.2 billion in 2017 retail e-commerce revenue, growing 42 percent to $28.7 billion by 2021—e-commerce in the United States is estimated to grow 47 percent in the same period to $603.4 billion.

"This level of growth in both countries will create significant opportunities for providers of logistics services," Leach says.

FLS has been an industry leader in cross-border trade for more than 30 years. Throughout its tenure, the company has tailored its product portfolio and physical network to serve the needs of both Canadian and American clients.

Whatever geopolitical challenges may linger, he sees growth ahead.

"Opportunities for logistics providers such as FLS are continuing to increase in the cross-border space," he says. "Trade between the United States and Canada remains strong, and FLS plays a significant role in acting as an intermediary for the transportation of commodities and products in a number of key sectors. The volume of cross-border goods FLS transports—whether by road or intermodal rail—continues to grow as a result of both an increase in market share wins, and steady cross-border trade volumes."

Leach believes this growth will continue over the next several years, albeit at a more moderate pace, while transportation-related costs will level out by the beginning of 2019. "Looking over the horizon, we expect even more innovative disruption occurring as better technology is introduced that will impact how we trade, and provide better visibility to how goods move through the supply chain," he says.

Polaris Transportation Group has seen a considerable increase in cross-border volumes in 2018. Polaris, best known for its scheduled LTL service between Canada and the United States, specializes in the shipment of dry goods. Based in Mississauga, Ontario, Polaris delivers industry-leading transit times to and from the United States including Alaska.

"Polaris has grown for nearly 25 years through simplifying transportation and logistics between Canada and the United States," explains Dave Cox, the company's president. "Leveraging an expedited LTL network, and connecting every U.S. ZIP code to every Canadian postal code, Polaris is at the forefront of helping customers expand their cross-border businesses.

"Our customers want fast, reliable service," Cox adds. "With new markets and new customers on the line, our clients value the cross-border expertise we bring to the relationship."

To maintain that strong relationship, Cox says, Polaris focuses on keeping pace with the evolutionary nature of logistics.

"As a result of the rapid pace of change and emerging technologies, we use our assets to solve problems in new ways," Cox explains. He notes particular examples, such as repurposing portions of the Polaris cross-dock network toward e-commerce fulfillment, and expanding the company's warehousing and distribution capabilities on both sides of the border.

"Moving forward, customers want greater connectivity in their supply chains, which has us investing in blockchain technologies," he adds.

In the end, Canada-U.S. cross-border trade thrives for the same reasons any partnership lasts: Built on a strong foundation, both countries protect, nurture, and maintain the relationship through constant attention over the years.