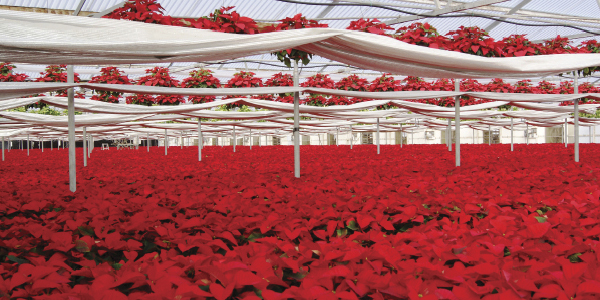 By switching from a manual to an automated routing and scheduling system, flowering plant seller Weatherford Farms puts the petals to the medal.

For many years, Weatherford Farms relied on a veteran driver to plan its deliveries, essentially building routes in his head. That process was less than efficient, especially during the peak holiday season.

In 2011, Weatherford Farms implemented the Paragon Routing and Scheduling System from Paragon Software Systems of Dorking, U.K. and Frisco, Texas. With help from this software, Weatherford Farms now routes its deliveries faster with far less effort than before, helping the business provide better service.

Weatherford Farms grows most of its flowering shrubs, tropical foliage, and seasonal and holiday specialty plants on its own property, just outside Houston. It employs 50 people and uses seven company-owned trucks to deliver plants within a 150-mile radius.

Back in 2011, the information needed to route those trucks all lived in the memory of one employee, a driver who had worked for Weatherford Farms for more than 40 years. Five evenings a week—and six evenings during the holiday season—he collected the day’s orders and scheduled them for delivery one or two days later.

“He knew all the customers, the locations, and how to approximate order sizes,” says Bridget Weatherford, co-owner of Weatherford Farms. “He was excellent at routing most of the time.”

But toward the end of the year, when order volumes exploded, the routing puzzle became almost too much for even the most knowledgeable brain.

“The holiday season is tricky, in that our drivers are trying to make upwards of 20 stops, covering a lot of miles,” Weatherford says. “They face demanding back door time constraints, and the trucks are at 100-percent capacity.”

It often took the router more than three hours to plan those routes. “And we could still end up with trucks that were too heavily loaded,” Weatherford says. Then the company had to adjust the routes and move product from one truck to another, holding up drivers at the start of their day.

Not only was this process inefficient, it was also unsustainable. While the retired driver who managed the routing did a fine job, he was getting on in years and not in the greatest of health, Weatherford says. The day would come when he could no longer take charge of the routing. Weatherford Farms would then have two choices: tap one of its current drivers to take over, adding hours to that person’s daily shift, or take human labor out of the equation.

To increase efficiency and provide for the future, the owners of Weatherford Farms decided to automate their routing process. They chose Paragon’s solution because it’s flexible and cost effective.

“Other solutions were too complicated and expensive, or they lacked the sophistication we needed to include delivery time constraints and the various sizes and shapes of the plants,” Weatherford says.

Management at Weatherford Farms worked with Paragon’s support manager, Mark Massey, to implement the software, collect the necessary data, and configure the system to match the company’s operations. Configuration accounts for factors such as customers’ delivery windows and traffic congestion patterns.

“One key thing users have to do to make the Paragon solution work is to collect the data and make sure it’s set up in a way that realistically represents their operation,” says Will Salter, Paragon’s president and CEO.

Another important step was to capture product information. “We provided Mark Massey with approximate square footage for all the different plants we carry, along with our truck capacity and how the plants were loaded in there, in tiers,” Weatherford says. “We also provided him with customer hours so that Paragon could take that into consideration as it was computing the route.”

Weatherford Farms started using the Paragon system to route its deliveries toward the end of 2011. Today, Weatherford and several of her employees know how to run the system, ensuring operations don’t come to a halt if someone is ill or busy elsewhere.

Although Paragon can link its solution to other management systems, companies often use simple flat files to move data on customers’ orders into the routing system. Weatherford Farms extracts that data from its sales system in the form of a spreadsheet and then imports that into the Paragon solution. “Once that spreadsheet is imported into the Paragon software, it can calculate each delivery and how much space it will take up in the truck,” Weatherford says.

The switch to automated routing made Weatherford Farms much more efficient. Instead of needing three hours or more to run routes in the busy holiday season, the Paragon system takes no more than 30 minutes.

Like the human router, the Paragon system occasionally makes an error in matching orders to available space on trucks. It’s simply impossible for every azalea tree or pot of tulips to exactly match the dimensions in the database, which the system uses when building loads.

“I might end up with a truck that’s a bit overloaded now and then,” Weatherford says. “But given the extreme variation of plant sizes that we have, the system does a fantastic job.”

Since staff at Weatherford Farms never analyzed the efficiency of their routes in the past, it’s hard to say if Paragon’s software has reduced fuel costs through better planning. But that seems to be the case.

“Before we went with Paragon’s system, drivers complained about arriving at a site only to find another driver already there,” Weatherford says. While trying to make customers’ delivery windows and not overload the trucks, the human router found it impossible to keep drivers from crossing paths in an inefficient way.

Due to capacity constraints, even Paragon sometimes needs to send more than one truck to the same part of town, Weatherford says. But there’s less of that. So it’s safe to assume that Paragon’s software is helping the company save money on gas, she says.

Weatherford Farms has no current plans to extend its use of Paragon’s system or employ new features. But there’s a good deal more the software could do if Weatherford and her team someday need new capabilities.

For example, if the company were to expand its operations, Paragon could route deliveries from multiple locations with one instance of the software. “It would have the ability to load in orders for a day, look at the depots that can make those orders, and also make sure that the right stock is in the right place,” Salter says. “And then it could do a multi-depot run.”

The routing system could also let Weatherford Farms tighten its delivery windows to one hour, or add proof of delivery, transmitting that information from the field to the transportation office, Salter says. Weatherford Farms could also install vehicle tracking systems on its trucks and transmit that data back to Paragon.

“For example, they could run a Paragon plan, upload it to a tracking system in the truck, and then compare the planned route against what the drivers are actually doing,” he says.

Staff could use the information to advise customers when deliveries were running late, to counsel drivers who weren’t completing routes as scheduled, or to uncover drive time estimates in the software that needed to be adjusted.

While Weatherford Farms has no current plans to invest in any of those functions, Bridget Weatherford is happy with the system just as it is.

How the Benefits Bloom

Related Articles
Share Everything: Why Multi-tenant Technology WinsAccurate Transit Times: The Backbone of Efficient Supply ChainsIs It Time to Think About Logistics Outsourcing?Is Transportation Management Your Core Competency?Delivery App Perks Up Coffee SalesTMS Provides Recipe for Visibility, Vendor ComplianceCloud-Based Route Planning? That Would Be Ideal!Three Key Points to Communicate to Become Your Customers’ Dream ProviderLeveraging Collaborative Logistics for Increased VisibilityTurn to Technology to Attract the Next Generation of Workers More related articles...