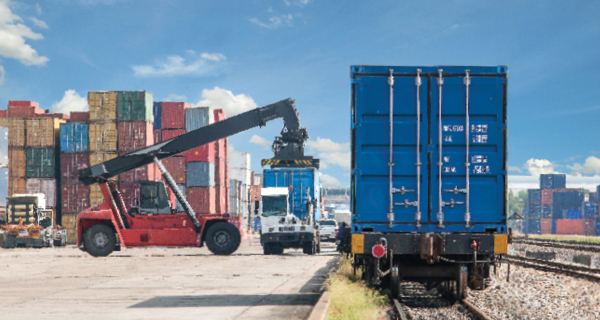 After a rough winter threatens to derail intermodal, the industry gets back on track.

The historically severe winter of 2013-14 proved to be a major challenge for intermodal shipping in North America. Inclement weather disrupted intermodal networks, leading to comprehensive struggles with service that lasted well beyond the winter season. The taxing winter, which inspired nicknames such as Snowmaggedon, caused "things to really implode" in the intermodal sector and "it took a good 18 months to recover," says Phil Shook, director of intermodal services at C.H. Robinson, a third-party logistics provider with more than 110,000 customers around the world.

The unlucky weather pattern interrupted a robust period of growth for intermodal. In fact, Shook says, 2013 had represented a highwater mark for intermodal service before winter arrived. Among the reverberations of that single winter is the view that intermodal is neither reliable nor cost effective. But that perspective does not reflect the current market.

"I would tell shippers that if they stepped away from intermodal the past two years, they should jump back in now," Shook says. "The water's great."

C.H. Robinson is seeing a commitment to intermodal that spans across industries. "We find it across almost all verticals," Shook says. "Any freight that can run in a dry van fits well into intermodal right now."

Intermodal is growing faster than any other mode of transportation, attracting purveyors of electronics, mail, food, paper products, clothes, appliances, textiles and auto parts, among others, according to the Intermodal Association of North America. Total intermodal loadings in North America have grown from approximately 10 million in 2000 to more than 16 million in 2015, indicates the association's Intermodal Market Trends and Statistics Report.

Moving forward, intermodal rail service promises to represent an important component of the national transportation network as population and consumer demand grow and the trucking industry wrestles with driver shortages and new regulations, according to Wesley Ann Barton, director of intermodal marketing for CSX Transportation, which provides traditional rail service and the transport of intermodal containers and trailers to 23 states, Washington, D.C., and two Canadian provinces.

"Intermodal rail provides shippers an opportunity to diversify their transportation portfolio to mitigate against future capacity crunches," Barton says. "Although over-the-road capacity is readily available today, regulations including Electronic Logging Devices (ELDs) and driver shortages due to an aging driver pool, high turnover and waning interest in long-haul trucking as a career are forecasted to impact capacity as soon as 2017."

FECR is experiencing strong demand for intermodal across Florida and consequently "continuously enhances products and services to meet the schedule and performance requirements of customers," Bridges says.

Similarly, CSX has made major investments in new and expanded terminals and new service offerings designed to improve its intermodal network, partly with the goal of cutting the average length of haul to help intermodal better compete with trucking and to support possible international cargo growth. Previously, according to CSX, intermodal competition has been limited to long-haul truckloads of 550 miles or more. Investments such as CSX's aim to make shorter intermodal hauls more appealing to shippers. In total, CSX has invested more than $700 million in its intermodal network.

An area of emphasis for CSX's intermodal development is the National Gateway project, a partnership with federal and state organizations to double-stack important CSX freight rail corridors between Mid-Atlantic ports and consumption centers and the Midwest. The $850-million project has already completed its first phase—a double-stack clearing between CSX's intermodal hub in Northwest Ohio and its terminal in Chambersburg, Pa.

CSX and FECR's support for intermodal appears to fit into a larger trend. One key reason to be bullish on the current and future state of intermodal in North America is railroads are investing heavily in the field and "intermodal service is fantastic right now," Shook says.

"Railroads have continued to plow unprecedented amounts of capital into their infrastructure and have heavily slanted toward intermodal improvements, which may not seem rational because the macro industry has not been strong this year," Shook says. "But the railroads have taken this little downturn in business as an opportunity to invest forward in their networks and to prepare not only for today but for the mode's long-term future growth."

Choosing the right sites for new distribution centers and manufacturing facilities can be an integral part of developing a vigorous intermodal operation. Shippers work with railroads, ports, real estate developers, business development groups and others to identify the ideal location for distributing their goods efficiently. Depending on the shipper and market, this can mean sites near ports or far from coasts that utilize the rail and interstate highway systems.

In addition, the design and features of the facilities where intermodal shipping occurs—from railyards and ports to distribution centers and manufacturing plants—can play a critical role in its effectiveness. A number of logistics parks are opening up around railroad intermodal facilities to take advantage of economies of scale.

As an example, Shook points to the 6,500-acre CenterPoint Intermodal Center in Elwood and Joliet, Ill. Two Class I railroads, BNSF and Union Pacific, operate facilities at the park, which hosts rail, intermodal, trucking and transload functions. Consequently, a number of distribution and logistics companies have set up shop at the complex, too.

"Anytime you can minimize the number of drayage miles in an intermodal shipment, the more competitive the intermodal offering will be," Shook says.

Rails and ports are collaborating to make the process as seamless as possible. For example, Bridges says, FECR offers door-to-door intermodal solutions for domestic and international equipment, assists with transloading international freight into domestic containers, and has worked with its port partners, PortMiami and Port Everglades, two of the busiest in the country, to establish on-dock and near-dock intermodal rail facilities and service, "allowing containers to load or unload quickly onto or off of waiting trains for the fastest track to Southeast U.S. markets."

CSX's Northwest Ohio Intermodal Terminal anchors a hub-and-spoke model and acts like an airline hub, "bringing in shorter-haul 'regional' traffic to create the density needed for longer hauls, or taking long-haul freight and distributing it via the hub to smaller markets," says Barton. The enterprising strategy means smaller markets that otherwise would not have received intermodal service can be served. CSX is now building a second hub, the Carolina Connector, a $270-million infrastructure project in Rocky Mount, N.C.

Some special considerations accompany intermodal distribution centers. The Hollingsworth Companies is a Clinton, Tenn.-based provider of industrial facilities focused on the Southeast region (see sidebar, below). Hollingsworth hosts intermodal-friendly plants and distribution centers in Georgia, Mississippi, North Carolina, and Virginia, where the company's sites have access to port facilities.

Distribution centers that manage intermodal shipping require a particular emphasis on safety and security for containers that pass through the facilities, says Tom Mann, vice president of industrial real estate with Hollingsworth. When intermodal cargo is unloaded at a distribution center, it could wait at the facility overnight or longer before being removed from the container and transported on the next leg of its trip. For that reason, locks, lights, cameras, and fences, among other security factors, take on added importance. So do the shippers' use of security seals to impede breaching the containers.

A number of technology-enabled innovations have improved the intermodal process.

One example is "automation at the rail ramps, which has expedited the driver's time at the railyard," Shook says. "All the railroads now have a mobile app so drivers can use a QR code to get in and out, which increases their time on the road doing revenue-generating activity."

The satellite tracking capabilities of devices also do more than ever to help shippers keep track of their goods as they are en route. FECR offers FECR Connect, an online portal for customers to trace their shipments, and EZ Buy, an e-commerce system for customers with door-to-door transactional freight. Similarly, C.H. Robinson can monitor its clients' assets in intermodal loads at all times—which provides advantages on multiple levels.

"Customers who ship high-value or high-risk cargo like it from a security standpoint," Shook says. "Also, from an asset management standpoint, we don't have to depend on spreadsheets or other people telling us where our equipment should be. An automated system tells us exactly where it is."

An innovation on the horizon that could have a sizable impact is the possible emergence of the autonomous truck. In narrowly defined areas, such as a railyard, port or logistics park, autonomous vehicles could take hold and further improve the intermodal experience, Shook notes.

One challenge to intermodal shipping is maintaining a consistent, predictable schedule, says Shook. Dependability is critical to ensure goods are transported efficiently, but it also is a necessity for shippers who are managing complex supply chains and budgets. An abundance of unexpected delays can cause costly chaos.

That's not currently an issue. "The biggest benefit for shippers right now is the high predictability of intermodal transit," Shook says. "Most shippers can budget for an extra day or two in their supply chain. They just need to know exactly what to plan for. With the railroads smoothing out their schedules, and being able to bring more predictability to transit times, customers are finding that's very valuable and something they can embrace."

In that vein, an important advantage to using intermodal rail is on-time delivery to consumption and distribution hubs. Through FECR, for instance, because of efficient interchange with Class I railroads Norfolk Southern and CSX in Jacksonville, "goods shipped to or from South Florida reach 70 percent of the U.S. population in less than four days," Bridges says.

An important lingering intermodal issue is driver productivity, Shook says, noting that drayage drivers typically work within 100 miles of their home base or ramp. Their workday is predicated on completing multiple shipments per day, but the prospect of waiting several hours to load or unload their vehicles wrecks the profitability of those days.

"We have to figure out as an industry how to enhance the driver's experience and profitability for driving to be a career that people want to consider," Shook says.

For companies considering either returning to intermodal or stepping into it for the first time, Shook recommends searching out an experienced third-party logistics company with expertise in the field and a consultative approach. Be wary of providers that seem to offer little more than low prices. He also advises that shippers make sure they understand how much elasticity exists in their supply chain.

"For the most part, intermodal service is good but you need to build in a little extra time if you currently ship over the road," Shook says. "In exchange for that, in most cases, you will save some money."

Hollingsworth, therefore, usually provides Class A masonry and steel buildings in standard sizes and layouts for its clients. Sometimes, the company tailors existing buildings to a client's specific requirements, preparing them in 60 days or less. Often, however, Hollingsworth constructs the facility from near-scratch on demand to meet its clients' needs. The company is one of the most experienced and efficient warehouse builders in the southeast United States.

"The industry demands that we put up our buildings quickly," Mann says. "If the facility is in one of our parks on a pre-graded lot, we can construct a 200,000-square-foot building in as few as 150 days."