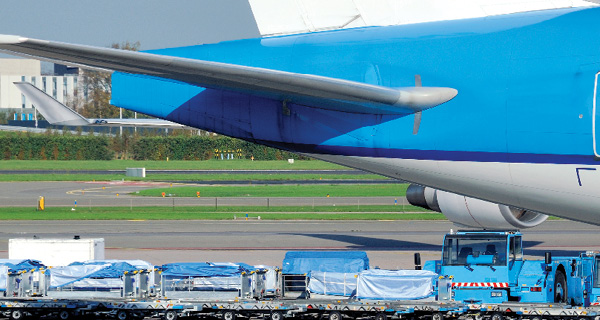 Airfreight forwarders have reason to buckle up. Facing sluggish consumer demand, shippers are increasingly willing to try ocean transport, even though it takes longer. After all, they can turn to sophisticated supply chain software that boosts visibility to goods in transit, helping them balance the lower cost of ocean or over-the-road shipping with longer transit times.

Additionally, changes in the airline industry mean fewer routes for cargo shipments. The long-term impact of Amazon and e-commerce in general remains top of mind for most airfreight forwarders.

Yet not all the news is negative. Supply chains are increasingly global, and some components will always move by air. Companies that need to move goods quickly, such as those operating in the "fast fashion" market or transporting critical components, rely on air transport.

Airfreight forwarders are working hard to manage the obstacles and leverage the opportunities. Many "are increasingly offering integrated solutions, facilitating end-to-end cargo delivery processes, enabling exporters to focus on their core competencies," according to research firm Technavio, in a summary of its 2015 Global Airfreight Forwarding Market report. The report forecasts a compound annual growth rate of 3.6 percent between 2014 and 2019.

The airfreight forwarding industry, along with the rest of the economy, experienced a severe decline between 2008 and 2014, says Brandon Fried, executive director with the Airforwarders Association, a trade association in Washington, D.C. However, even as the overall economy recovered, the airfreight forwarding market lagged. A lack of consumer demand and over-capacity among ocean carriers contributed to that, Fried says.

Slower growth in international trade likely will continue to dog the airfreight industry. In September 2016, the World Trade Organization predicted trade to grow by between 1.8 and 3.1 percent in 2017, down from its earlier forecast of 3.6-percent growth.

One of the most significant factors impacting the airfreight forwarding market is shippers' growing determination to find the least expensive way to move their goods and still hit deadlines. "Shippers are trying to be creative," says Erez Agmoni, head of airfreight, Americas, with Damco, which provides freight forwarding and supply chain management services.

Continued software advancements make it easier for freight forwarders to let shippers know where their goods are at all points during transit and offer alternatives when trouble—say, poor weather—is imminent, Agmoni says. The solutions can help shippers make delivery commitments, without arriving so early they boost inventory holding costs.

Online freight marketplaces, such as Freightos, allow shippers to easily see how much it will cost to move a shipment from say, Chicago to Hong Kong, says Paul Steiner, vice president of strategic analysis with Spend Management Experts, an Atlanta-based transportation spend management consultancy. Finding out this information used to take multiple phone calls, he adds.

What's more, tools such as track-and-trace are increasingly available to even small- and mid-sized businesses, says Michelle Halkerston, president and chief executive officer with Hassett Express, a full-service transportation solutions provider based in Oak Brook Terrace, Ill. "Delivering information is as or more important than delivering the product," she says.

To be sure, implementation remains spotty. That creates challenges for freight forwarders, who need to integrate with steamship lines, airlines, and other partners, some of whom continue to work with more manual systems, says Hiram Hartnett, executive vice president of sales with Pegasus Logistics Group, a provider of logistics solutions based in Coppell, Texas. "You can build the tools, but until everything is integrated, there will be some gaps in the process," he notes.

Trends in the airline industry also impact the airfreight forwarding market. One is the shrinking number of wide-body planes. Large-size wide-body airplanes accounted for 11 percent of the in-service fleet in 2016, down from 36 percent in 1995, according to Boeing's Current Market Outlook, 2016-2035.

The result? Many freight forwarders are fighting for space in the same narrow-body planes, Halkerston says. For instance, rolls of carpet that would fit easily on wide-body passenger planes now move via cargo planes. That's a concern, as most airlines' flight routes are determined by passengers, rather than cargo, she adds.

In addition, when shipping a large volume of goods, keeping all units together is preferable, Halkerston says. That becomes more difficult on narrow-body planes.

Airline consolidation also impacts the airfreight forwarding industry, as it usually leads to fewer routes. That cuts cargo space, Gettings says, and has prompted some shippers and airfreight forwarders to rely on multiple carriers and stock inventory in different places.

Up in the Air

The impact of several market shifts remains to be seen. The growth of e-commerce, and particularly free shipping offers, is one such seismic movement. Of course, "free shipping" isn't actually free, yet consumers have come to expect it. Forwarders can help shippers by providing "creative money-saving alternatives," such as combining air and surface transport options to move goods quickly, yet at a reasonable cost, Fried says.

Amazon is another source of uncertainty. In March 2016, Air Transport Services Group announced an agreement with Amazon Fulfillment Services, an affiliate of Amazon.com, to operate an air cargo network serving U.S. customers. As part of the agreement, Amazon is leasing 20 freighter aircraft.

"The next question: Will Amazon start running its own airline?" Steiner notes. If so, Amazon will control more of its supply chain. That could take share from other forwarders, but also could provide forwarders with an opportunity to use Amazon's capacity. "It will depend on the Amazon freight rates and the space Amazon may be able to offer," he says.

Advances in drone and digital printing technology also are prompting concerns, Fried notes. Until recently, if a factory line was down because a widget broke, that widget likely would be airfreighted to the plant. Soon, it may be possible to deliver the widget via drone or print it on site.

The growth of "fast fashion," or the rapid turnover of apparel inventory so retailers can feature new styles, may prompt more shippers to move to air freight in order to ensure their goods quickly move to store shelves. "Even five days in transit is no longer fast enough," Agmoni says.

Many mission-critical components and parts, such as those needed to keep data centers humming or medical equipment operational, will continue to move as rapidly as possible. For most, that means air transport, Gettings notes.

Airfreight forwarders also can capitalize when misfortune hits other modes of transport, such as the port strikes in Los Angeles in 2015, or the 2016 bankruptcy of Hanjin Shipping Co. Both shifted some demand to air freight.

"The port issue created doubt and there was a bump in airfreight," Fried says. "It taught shippers they need to have a hedge against adverse transport conditions when they ship on the ocean."

Had the Hanjin bankruptcy occurred one or two weeks later than it did, it likely would have prompted a "massive shift to air" as retailers scrambled to ensure their goods made it to their stores well in time for the holidays, Fried adds.

New phones, watches, tablets, and other devices that generate high consumer excitement and urgent demand also tend to boost the airfreight market, Hartnett says. When consumers are lining up to be first in line for a product, shippers often decide to move it via air.

Given the forces buffeting the industry, it's clear the freight forwarding business isn't for the faint of heart, Fried says. Industry leaders have robust systems that are difficult to duplicate. They're also used to preparing for anything.

As Fried says, "People who ship boxes, always have to think outside the box."