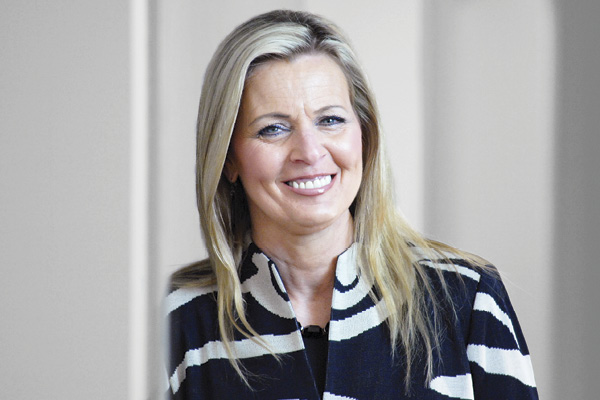 When she joined trucking company Freight Flow as a part-time billing clerk in the early 1990s, Angela Eliacostas was looking to augment her income as a young, single mother with four children. Then she rose through the ranks, eventually becoming general manager. In 2005, she launched a firm of her own.

Eliacostas formed All Girls Transportation and Logistics with a focus on the nuclear power industry. It soon expanded to serve other kinds of energy companies, and then other industries as well. Starting with revenues of $18,000 in 2006, the company brought in more than $2 million annually by 2008.

It has been growing ever since. Today, the firm is called AGT Global Logistics. Headquartered in Glen Ellyn, Ill., it provides a broad range of third-party logistics (3PL) services. "We're a one-stop shop, handling everything from small packages to 200,000-lb. transformers," Eliacostas says.

In a recent interview, Eliacostas provided a look at what it takes to steer an operation that can move just about anything.

IL: Can you provide an example of the special logistics challenges energy companies face?

In 2015, we helped a nuclear power plant in Minnesota go into a 'planned outage.' That's when they take down a unit to make sure the equipment is in great operating order before summer, peak demand season. Because these plants are old, many of the replacement parts they need are obsolete. So they have to source them from other plants, which are often located in the middle of nowhere.

We asked our freight forwarder to fly a part from upstate New York to Minneapolis that morning. The forwarder said there was no way a courier could get it to the airport in time. But without that part, the customer would have lost $1 million for every extra hour the plant stayed down.

Luckily, one of our sales reps was visiting a customer in Pennsylvania and was preparing to fly home to Minneapolis. I called in a favor, getting a connection in upstate New York to pick up the part and meet the salesman halfway between their locations. The rep hand-delivered the part to the customer.

IL: What growing pains has AGT gone through since you started it in 2005?

Our biggest challenge along the way has been hiring the right people. Each person who joins the company becomes part of a family. Sometimes a candidate has the right experience on paper but doesn't turn out to be the right fit.

Each of our clients needs a slightly different kind of treatment, so we try to match employee personalities to the clients they serve. Sometimes that's hard. But I couldn't be happier with the people we have working for us today.

IL: When you started the company, were you really 'All Girls'?

Yes! We were four women, and we worked together well. Our first male employee was a salesman. He was harassed constantly; people would ask, "Are they going to make you wear pink shirts and skirts?" But he used this to his advantage; he had a great sense of humor.

My father always told me that as a woman in this industry, I would face many challenges, but hard work knows no gender.

I sometimes encounter people who assume I'm just providing a front for the company, so we can earn woman-owned status. I smile, and they throw out question after question. By the time I'm done answering, I've gained their respect.

IL: How do you lead? What's your style?

I get into the day-to-day grind. It helps me stay in tune with what's going on in the industry, what's going on with my clients, and what my staff is experiencing. For example, if the phone rings when I'm walking past, and my people look busy or stressed, I grab it.

My employees and clients respect that I take a hands-on approach. But I also know how to surround myself with great people. My office runs like clockwork whether I'm sitting at my desk or I'm out of the country.

IL: What lessons from your early career helped to shape the leader you are today?

When I worked at Freight Flow, a co-worker named Tom trained me to eventually take over his job. When he retired to Florida, he gave me his number and said that if I needed help, even in 10 years, I shouldn't hesitate to call. One morning at 2 a.m., I got an emergency call from a client, and I needed advice. I called Tom, and he walked me through the situation just as if he'd been sitting in the office the day before. That was probably the greatest lesson I've received: If you tell somebody you'll be there for them, you'd better mean what you say.

IL: Who are your role models?

First, my grandfather. He's 96 years old, and he still goes to his zinc plating business three days a week. Second, my father. I remember thinking as a young girl that my dad was never sick. As I grew older, I realized he was sick plenty of days, but he never let that stop him. He was the sole breadwinner for our family, and he did whatever it took to keep the household running.

We recently completed the certification to become an indirect air carrier. That means the Transportation Safety Administration pre-approved us to give cargo directly to an air carrier, without working through a freight forwarder. I never want to be trapped by someone telling us we have no options, as our forwarder did when we needed to rush an emergency part to the nuclear plant. In the office we say, 'We have to keep our clients' worlds turning.' We are an unstoppable company, and there's nothing we can't do if we put our minds to it.

IL: How do you spend your time outside of work?

My husband and I have seven children between us, plus three grandkids and another two on the way. The entire family loves coming to our house for parties. Managing the logistics of a big Greek family and a big Italian family is my main focus outside work.

While other children were playing with Tonka toys and Hess trucks, Angela Eliacostas had her eye on bigger things.

"My father always owned transportation companies; he was in the trucking industry before I was born, and I was intrigued by what he did," she says. She spent so much time hanging around his fleet of dump trucks, her dad finally decided to give her a job.

"He gave me $2 a day to pump fuel into the fuel tanks," says Eliacostas. "I'll never forget it: 550 pumps produced 100 gallons of fuel for each tank."

She was nine when she started. A few years later, she learned to drive a truck to the back of the lot, wash it, and plug it into an engine block heater for the night. Later, her father taught her how to dump a load.

That's how Eliacostas first got an inkling that transportation lay in her future. "I figured it was going to be my destiny," she says.